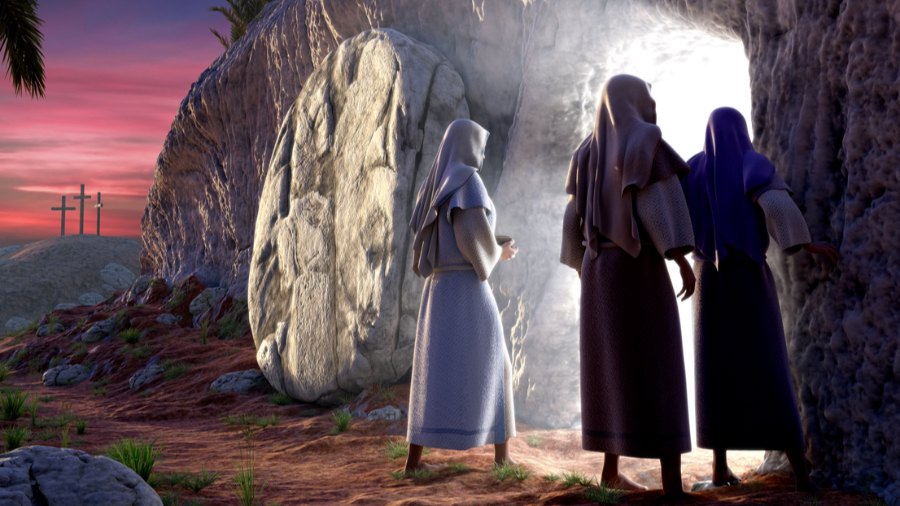 These are very trying times. There is an enemy out there at the microscopic level, wreaking all kinds of havoc in people’s hearts and minds and lives. The economic consequences alone of the coronavirus could possibly be felt for years to come.

The big problem in life, of course, is the threat of death.

Jesus Has Taken the Sting Out of Death and the Coronavirus

But the coronavirus is not going to cancel Easter, though it may cancel our traditional celebrations of it. But Easter hope defangs the threat of the coronavirus because Jesus has taken the sting out of death.

After a bee stung a boy one day, his young brother was frightened as the insect continued hovering around him. But his father told him not to worry — there was only one stinger in that bee, and his older brother had already received it.

Jesus is our older brother, and He has taken the sting of death upon Himself. As the Apostle Paul would say, “Oh death, where is thy sting?”

Christian Hope Rests on the Historical Reality of the Resurrection

Easter hope is not just a pious sentiment. There is ample reason to believe that Jesus bodily rose from the dead, historically.

For Christian television, I once interviewed Dr. Dana Harris of Trinity Evangelical Divinity School in the Chicago area. She told me, “Christianity rests on the historical proclamation that Jesus rose from the dead.”

Harris added, “I would say that it’s virtually impossible to maintain the idea that we can separate religious truths from historical facts and it has to do with the nature of Christianity. Christianity is fundamentally dependent on historical truths. In other words, if Jesus is not resurrected from the dead, then we don’t have Christianity.”

Lee Strobel Famously Delved Into the Historicity of the Resurrection

But what about the idea, promoted by skeptics, that perhaps this was just a legend from the ancient world? One man has an interesting take on that. Lee Strobel, former legal affairs editor for The Chicago Tribune, received his legal training at Yale Law School.

When his wife started going to church, he worked hard to disprove the faith — so he could reclaim her, and the two could live happily ever after as agnostics.

But his quest to disprove Christianity had an unexpected result: He became a believer in the very thing he tried to falsify. He wrote all this up in his classic book, since made into a motion picture, The Case for Christ.

In an interview for D. James Kennedy Ministries, Strobel noted, “One very powerful evidence is that we have a report to the resurrection of Jesus that has been dated back by scholars to within months of His death. So, what we have is — in 1 Corinthians chapter 15, starting in verse 3 — a creed, a report of the early church that says: Jesus died — why? — for our sins. He was buried, and the third day He rose from the dead. And then it mentions specific individuals and groups to whom He appeared.”

Strobel adds, “And if that creed developed so early, the beliefs that make up that creed go back even earlier. … Probably one of the greatest classical historians who ever lived, A.N. Sherwin-White of Oxford, studied the rate at which legend grew up in the ancient world. And he determined that the passage of two generations of time is not even enough for a legend to grow up and wipe out a solid core of historical truth.” With the Christian reports of the resurrection, notes Strobel, “We’ve got a ‘news flash from ancient history.’ So that is a very powerful bit of evidence.”

The Resurrection of Jesus Changes Everything

The interesting thing about the resurrection of Jesus is that the earliest skeptics of the event were the disciples themselves. They were only convinced because Jesus appeared to them over and over. Then they became so convinced that they went out and became unstoppable in their proclamation — in some cases, even when it meant they would be put to death for their testimony.

As Lee Strobel puts it:

COVID-19 may have set the world’s teeth at edge. And, ultimately, it is a reminder of our mortality. We are not going to escape this world alive. But thank God for Jesus, the elder brother, who has taken the sting out of death for those who believe. Nothing, including COVID-19, will ever cancel Easter.

Jerry Newcombe, D.Min., is a senior producer and an on-air host for D. James Kennedy Ministries. He has written or co-written 32 books, such as The Unstoppable Jesus Christ, American Amnesia: Is American Paying the Price for Forgetting God?, and What If Jesus Had Never Been Born? (with D. James Kennedy) and the bestseller, George Washington’s Sacred Fire (with Peter Lillback). Learn more at www.jerrynewcombe.com and follow him on Twitter @newcombejerry.