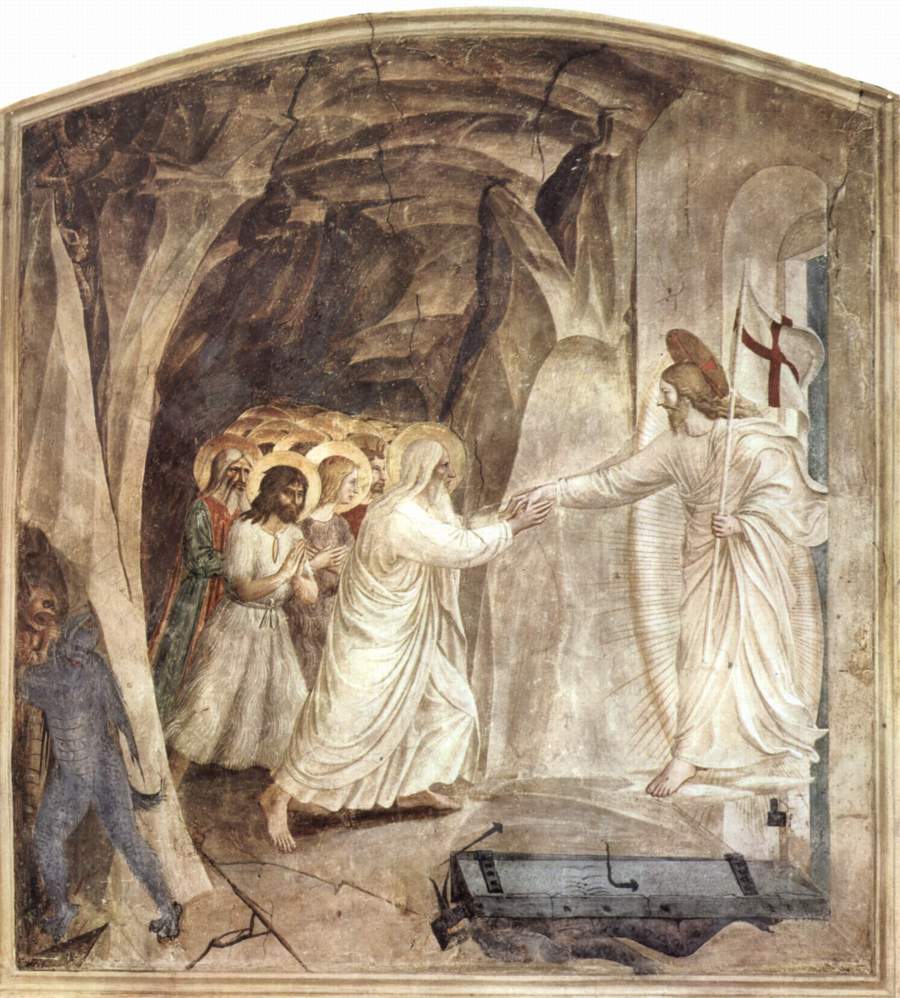 Before His resurrection from the dead, Jesus Christ grants salvation to souls by the Harrowing of Hell. Fresco, by Fra Angelico, c. 1430s.

It’s hard to know how to spend this holy day. It’s easy to let it slip by. You might be exhausted emotionally, if you really marked Good Friday. You might sleep in, then putter around, until it’s time for the Easter Vigil. Then poof! The day is gone. That happens to me most years.

But that would be cheating yourself of a key mystery of this weekend. Consider what we commemorate today: The hours that Jesus’ body lay cold inside the tomb. When His mother and the holy women mourned in silence and secret. And the apostles cowered in fear, and blank confusion. Who was triumphant? Both theological parties in Jerusalem. The liberals — the Sadducees, who truncated the scriptures, denied life after death and collaborated with Rome. And the conservatives — the Pharisees, whose leaders Jesus had solemnly called hypocrites. He knew that by reading their souls.

He Descended into Hell

And where was Jesus? The creed tells us that He “descended into Hell.” Some theologians have taken that phrase and run with it, inventing overwrought theories about Jesus actually suffering the pains of the damned and the demons. But the phrase as the Church understood it refers to the realm of the dead, of all the dead, from Adam and Eve to Elijah, Moses and Abraham. Traditional Catholic theology had a nice term for what these and other righteous souls experienced from the moment of their deaths until Holy Saturday: The “Limbo of the Fathers.” The invaluable 1907 Catholic Encyclopedia explains:

St. Paul teaches (Ephesians 4:9) that before ascending into Heaven Christ “also descended first into the lower parts of the earth,” and St. Peter still more explicitly teaches that “being put to death indeed, in the flesh, but enlivened in the spirit,” Christ went and “preached to those souls that were in prison, which had been some time incredulous, when they waited for the patience of God in the days of Noah” (1 Peter 3:18-20).

I like to imagine the ruckus when Our Lord at last appeared. Did He hammer on the gates with His wounded hand, and knock them down? Was His first welcome for men like the Maccabees, whose sacrifice prefigured His? Did He stoop to pick up and cradle the Holy Innocents, the first martyrs for Christ? Or did Jesus single out Abraham first and embrace him? The loveliest thought, to me, is of the moment when the new Adam met the old, led him and Eve to retrace the steps by which they’d fled the angel out of the Garden.

My favorite modern icon, pictured below, imagines the new Eve, Mary, comforting our first mother and assuring her of forgiveness. Though that must have happened later, since Mary still walked the earth — and indeed was just after the crucifixion still weeping in Jerusalem. The vivid, but slightly misleading, term for Christ’s trip through the underworld is “the Harrowing of Hell.” As our pastor reminded us on Palm Sunday, Jesus died alone, but rose with a “cloud of witnesses.”

There’s something about Holy Saturday that makes us feel like we’re in Limbo. We’re caught between utter horror — the death of God, stung by our sins — and the prospect of inconceivable glory. What shall we do with the day?

That bleak, ambivalent feeling recalls another use of the word “Limbo.” Some theologians conceived “the Limbo of the Innocents” as a state of perfect natural happiness. Something like what Adam and Eve enjoyed while in the Garden, except without hearing God’s voice. This was the fate that children who died without being baptized, but before committing a serious sin, would experience for eternity. The theory of Limbo was a kind of happy medium between two unacceptable extremes: Declaring such children damned, because they lacked water baptism. Or waving them straight into heaven without the sacrament Jesus told us was the only means of entry.

Building Our Very Own Limbo

This theory fell out of favor after Vatican II. The best explanation I’ve heard was from the late, great Catholic physicist and writer Fr. Lorenzo Albacete. He once told me that we shouldn’t believe in Limbo because, “everybody would want it! It’s such a good deal!”

I gave that a lot of thought. As a modern just like me, you probably should too. Be grimly honest with yourself: Imagine if God spoke to you now, and told you that you could avoid the danger of falling into Hell. Poof, it’s gone — not going to happen. The price? You won’t enter Heaven. You’ll just enjoy a state of “perfect natural happiness,” without the Beatific Vision. For me, that would be an eternity curled up with my beagles in bed, listening to history podcasts in the twilight. No choirs of angels, to be sure. But also no danger of devils. How many modern people would snap up Limbo right that minute? Too many, all too many.

I know that because the world we have tried to build is precisely Limbo: We seek a perfect natural happiness here and now. We’re willing, most of us, to swear off ecstatic pleasures as the price of avoiding anguish. That’s how we stayed off hard drugs back in college. We didn’t emulate either Jim Morrison or Mother Teresa. We aped those nice folks on Cheers and Family Ties. Nobody gets damned in a sitcom. Or saved. They just keep repeating their character arcs, over and over and over.

Who Will Harrow This Hell?

The quest for Limbo is futile of course. If it really does exist, it’s only for infants who die before the age of reason. Which means that we’re stuffing the rafters with souls from abortion clinics. We’ve even gone ahead and constructed our own high-tech version of Limbo. Or how else would you describe all those freezers in fertility clinics, with embryos “on hold”? Where are their souls, by the way? In some divine waiting room? There’s no way to know for sure.

In such a world as we’ve built, we wait but we’re not sure for what. For some drug that will stop the aging process? For scientists to find a way to upload our minds to computers? Or do we secretly wait for the fanatics we’ve admitted into our midst to finally rise up and kill us? That certainly seems to be the unstated end game for Europe.

The righteous who lived before Christ presumably realized Who they waited for. They knew Him when He came. Would we?