We’re Pilate, But We Should Be the Jews 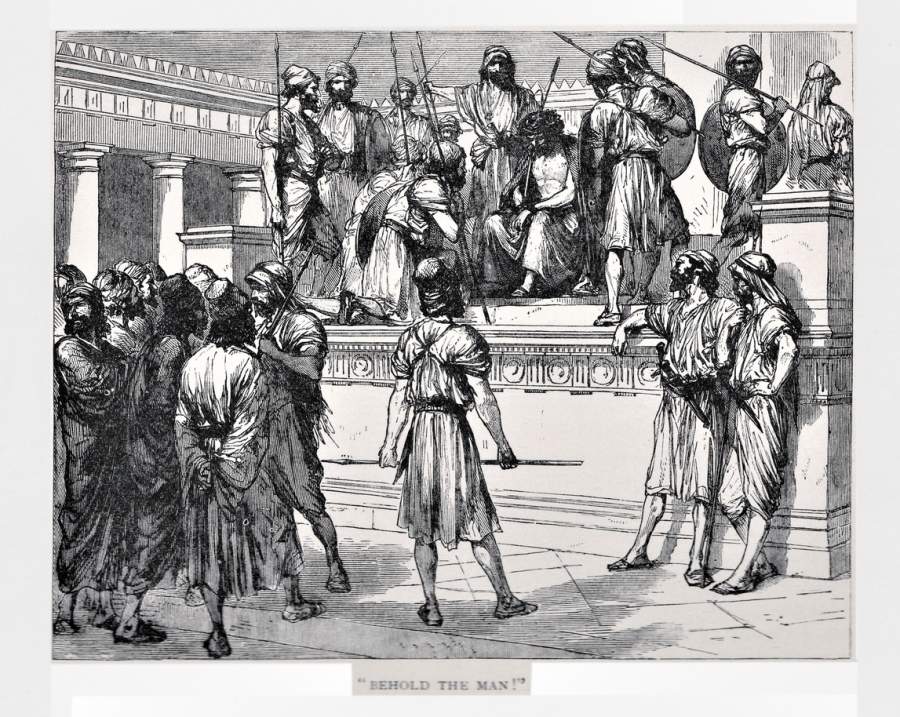 How many sermons have you ever heard about Pilate and what an evil swine he was? Not many. Maybe none.

Pilate tried to save Jesus’s life before finally giving in. Maybe he didn’t have the courage to act on his convictions or maybe he just didn’t care about them. In either case he calmly calculated the costs and did the most useful thing for himself. Bad, but not (we tend to feel) as bad as the ruthless religious leaders and the howling mob. They wanted to kill Jesus. He just let Him die.

Mostly because we’re comfortable and successful and safe. We have a lot to protect. And maybe because we don’t care enough about the truth, or about other people. Because, in other words, of the story’s two villains, we’re the calm calculating Roman. Of course we won’t see how bad he was. Of course we’ll excuse him. He’s us.

The Jews demanded Jesus’s death and willingly took the blame. Bad, yes, but at least they believed something. At least they cared enough about the truth to fight for it. They cared so much about the things of God they risked their lives, because as they knew full well, the Romans could deal with mobs by killing them.

We shouldn’t be Pilate. We should be the Jews.

I say “we,” because what I’m saying is mostly true of me and I’m pretty sure mostly true of most American Christians. We’re calculating, disengaged, standing at a distance from the events, able to figure and play the odds. We don’t stick our necks out. We value prudence, balance, reflection. (Or so we tell ourselves.) We look out for ourselves and our families and our friends.

For more about Pilate, see David’s Pilate Was One of the Bad Guys. “Pilate, he was just running his little part of the Roman empire. He didn’t care if Jesus was a hero or a villain. He was only today’s political problem.”

We have lots of reasons not to do anything too quickly or too energetically. I’ve written about this before in Speak Now, or Forever Shut Up. We can explain that we won’t do anything now because we think we can get more done later. We’re “keeping our powder dry.” Or we’re “picking our battles.” We must be “realistic, not idealistic.” The problem, we say, is complex. We see the nuances simpler-minded people don’t see. It’s so complex we can’t do anything now. We must study it more. “Fools rush in,” we say, “where angels fear to tread.”

I don’t think I’m alone in thinking like this. When I examine my conscience, I don’t often think of the sins of not caring enough to fight evil or to do good. Here’s a test: I don’t find myself committing the sin that happens when truly righteous anger turns into the deadly sin of wrath — because I don’t often enough feel righteous anger. I don’t feel it, though the world presents many reasons to feel like Jesus when He looked at the money-changers in the Temple.

The chances of my joining in a riot are about zero, but that’s not entirely to my credit. I’d be a better man if sometimes I might be found in a mob.

I’d like to think I’m always prudent and tolerant and all that. I’m afraid I have to admit that I’m often just indifferent or uncaring, that I calmly calculate the costs and do the most useful thing. That I’m not so different from Pontius Pilate.

The Jews Believed Something

The Jews believed something. They thought this man Jesus was a conman, a fraud, a liar. A predator, even. They thought he blasphemed and they saw the real horror of blasphemy. They cared enough to hit the streets and challenge their imperial and often brutal rulers. That took raw courage.

What would most of us have done? Not hit the streets. Talked with people we mostly agreed with about this difficult man, regretting the damage he seemed to be doing and feeling sorry for the people he was fooling. We’d tsk-tsk Jesus, but we’d also tsk-tsk those people running into the streets to protest him. “That’s not the answer,” we’d say. Then we’d talk about baseball or money or gossip about the pastor. The kind of conversation Pilate might have had over dinner after that hard day dealing with those obnoxious Jews and that interestingly odd “Messiah.” Too bad He had to go to the cross, but that’s life.

The religious leaders and the crowd were wrong to act as they did, because they did not recognize the Son of God standing before them. How guilty they were for this, we cannot know. They must have been as complex and as contradictory and as confused as all the rest of us sinful human beings. Jesus surely included them when He asked His Father to forgive them, for they did not know what they were doing.

But they were not wrong to act. They were right to act. They risked their lives for what they believed to be the truth. The Jews served the good as they saw it, and that we should imitate. We’re mostly Pilate, but we should be the Jews.

For another reflection on Pilate’s guilt, see David’s Pilate Was One of the Bad Guys.

David Mills is a senior editor of The Stream. After teaching writing in a seminary, he has been editor of Touchstone and the executive editor of First Things. He edits the site Hour of Our Death and writes the “Last Things” column for the New Oxford Review.