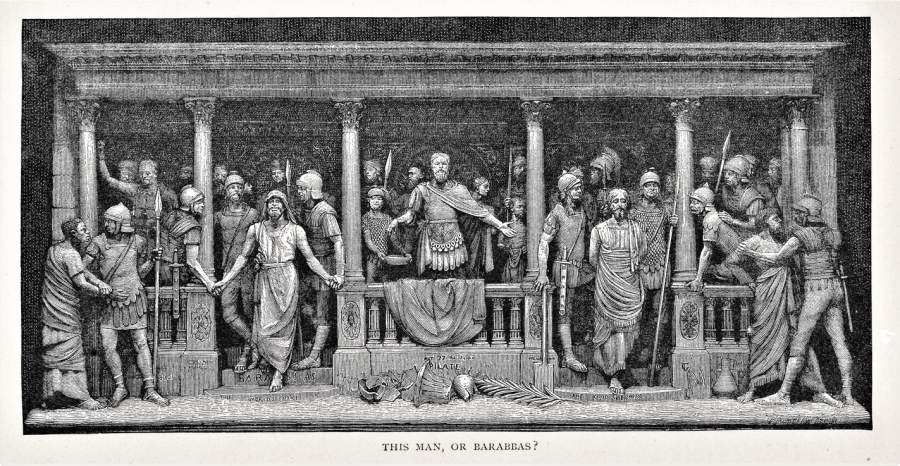 How do we mark a day like this? The worst crime in human history, the murder of the God-Man. It’s one in which each of us, without exception, is implicated. If one, just one, of us had sinned, Christ would have died to redeem that. So each of us stands, in a sense, like Barabbas — a criminal whose skin was saved by the death of this Innocent.

What did Barabbas do on that fateful day? When the door of his cage squealed open, and he squinted in the light … how did he greet the news? Did he scoff cynically, and take to his heels? Flee the cross, as we like to? Did he stand in the crowd and gloat, taking attaboys from the mob which had won his freedom? If he was more a Zealot than a simple criminal, perhaps he felt a little guilty. Maybe he simmered with anger, at the Roman occupiers killing yet another Jew. Perhaps he was one of those who called on Jesus to come down from the cross.

Some of those cries were mocking. But others, perhaps, sincere … from people who wondered if maybe, just maybe, another miracle was imminent. Would Jesus shatter the bonds of death and liberate His people? That of course, He did.

We Can’t Rush to Sunday

But not yet, not today. The liberation waits. The Resurrection’s not yet. It won’t do to rush things, to start saying “Happy Easter!” at 12:01 p.m. today. We aren’t there yet, because in the eternal moments we commemorate today, Jesus isn’t there yet, either. We can’t rush straight to Sunday because He didn’t. It’s our job to stand here, as Barabbas probably didn’t, but St. John and Mary did. We must flock to the foot of the cross, and admit the bitter truth that it and it alone is the fountain of living water.

What did Barabbas do on that fateful day? When the door of his cage squealed open, and he squinted in the light … how did he greet the news? Did he scoff cynically, and take to his heels? Flee the cross, as we like to?

In our daily lives and our politics, we must likewise cling to the cross. Beyond carrying our own, we’re called like Simon of Cyrene to offer aid as well. Not the sponge full of vinegar and painkillers that the mob is happy to proffer.

We can’t collude in sin, to make life easier, either for us or for others. Nor wash our hands with Pilate, because it makes things tidier. We can’t skip straight to Sunday, or else we’ll just never get there. To do the Father’s will, even Jesus had to climb the Cross and suffer there three long hours, then descend into “Hell.” There He stayed, for days, collecting the souls of the ancient righteous. It was there, and only there, in the Kingdom of Death, that He conquered it.

Stand with the Tempted and Persecuted

So we need to stand with the suffering and the afflicted, the tortured and the tempted. Since suffering is everywhere in a world afflicted by sin, that can take many forms. I like the way Jason Jones formulates this part of the Christian calling. As I summed up his take after an interview with him:

People pretend that they want to stand “in solidarity” with the weak. Far too many, however, jump back when doing so would actually cost them anything. They refuse to have “skin in the game,” to quote Nassim Taleb, author of The Black Swan and Antifragile. They want the reputation for virtue without doing the work, the appearance of practicing empathy without the risk of suffering.

That addiction to cheap grace and public praise has become a dangerous ideology, Jones said. He cited the work of Christian philosopher Rene Girard, who labeled it “Victimism.” It means that you pretend to speak up for victims, while carefully insulating yourself from paying any kind of price.

We Can’t Collude with Caesar’s Lies

We can’t play that game. God isn’t fooled. Our excuses will count for nothing in the cold light of dawn when the cock crows.

From day to day, and person to person, our tasks will differ. But one thing we can’t do is call good “evil” or evil “good.” We can’t make people comfortable by colluding in Caesar’s lies, or Google’s. We can’t go along to get along — not when the medical establishment is mutilating children to serve the transgender delusion, or murdering them for America’s sexual convenience. We can’t pretend that same-sex “marriages” are real. That Islam is a tolerant “religion of peace,” or socialism a method of lifting up the poor. We can’t, in other words, no matter what our motives or how tired we are of conflict, join with the crowd in shouting “Give us Barabbas!”

Because we are Barabbas. The best we hope for? To become instead the Good Thief, who begs Jesus for help as he dies right alongside Him. If we justify sin and rationalize it, we’ll die anyway — but we’ll die like the other thief, who mocked Christ right till the end.

At the Foot of the Cross

I wish you a blessed Good Friday and Holy Saturday. In addition to the services your church is offering, I hope you will join me at the foot of one particularly bitter and urgent cross. I mean that of persecuted Christians around the world. Save the Persecuted Christians is sponsoring a worldwide prayer event from Holy Thursday through Easter, on behalf of those hunted for Christ. I will be taking part, and I hope you can join me.

May God rain the blessings of this dark and hopeful day on you, as He poured them forth from the wounded side of His beloved Son.