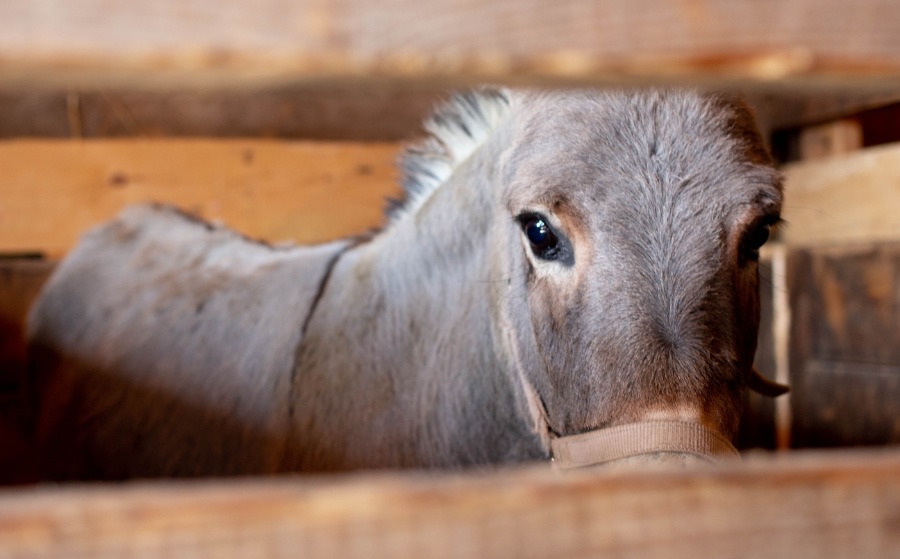 It was cold on that winter night. Fires were lit in every fireplace. Children huddled together sharing warm blankets. Moms and dads sat close to their fires sipping hot soup.

There were no warm fires in the barn, but the animal world could manage. Genie had been hoping that her baby donkey would be born on a milder night, but as she lay in the straw, she knew this would be Dankar’s birthday. She and donkey-father, Jack, had chosen this name for no special reason other than they liked the way it sounded. “Dankar” rolled off the lips easily.

Just before midnight, Dankar was born. He shivered in the cold barn but snuggled close to his mother for warmth and nourishing milk. Jack stood close by, nervously nibbling on some tasteless straw left in the feeding trough.

No one could imagine what lay in store for Dankar. Though his name would never be known outside the animal world, he would become a player in the greatest drama in the whole world. His story will be told as long as there are people to tell stories.

As he grew up, he had a few friends close to his age. They sometimes talked about the lowly status of donkeys. They noticed that horses and camels often wore beautiful saddles and ornaments. People could be heard boasting about the speed and endurance of their horses and camels. Donkeys were useful, but seldom celebrated. There was nothing Dankar and his friends could do about being a donkey. No use wishing they were horses or camels. No benefit to wondering, “Why me?”

Dankar was a strong but regular colt. No one had yet chosen him to ride. He was learning how to be led by a rope at the hand of his owner and to follow his commands. He spent lots of time tied to a wooden rail just outside his owner’s house.

One day some nervous-looking men slipped up from behind and untied him. As they began to lead him away, he heard his owner, “Why are you taking my young donkey?” They said that the master needed him. Surprisingly, his owner agreed.

Dankar was nervous too! Soon it became clear that he was expected to carry a man on his back in some kind of parade. He had never done that before. Would he be able to hold up? Would he stumble? Would the rider beat him if he didn’t walk smoothly? Why not get a more experienced donkey? Why not a horse or a camel? Why me?

There was no way Dankar could have known that hundreds of years before, ancient prophets had told of this day and promised that the greatest person who ever lived would ride a donkey into the city of Jerusalem. This person was and is the king over all nations of the earth and his kingdom is marked by the humility of the donkey. This king would love the unqualified, stumbling, weak, and less noble people of the world. They would be the ones who shared in his parade…forever.

But Dankar didn’t know about prophets and stuff. He did not know that the one on his back would in a few days be nailed to a cross and three days arise from the dead. How would he know that the greatest day in history was just a few hours away? For the moment He was in a big parade with palm branches under his feet. People were cheering their hearts out. No horse or camel had ever been in this kind of celebration. He loved it! It was so exciting that he forgot about his fears and questions and just enjoyed the walk.

He knew that they were not cheering him, but the one who was riding on his back. But he loved being a part. He didn’t want the parade to end. It was so much fun. He had never dreamed of being a part of such a grand day. Later he was taken back to his owner. He couldn’t wait to tell his friends. They would never believe him, but it was true and he knew it. Often he would muse about being a part of the grandest parade in all history and wonder: Why me?

I wrote this story of Dankar for Palm Sunday. We read it for the four grandsons, ages 10-3 during family church. It was interesting what part they picked out as significant to each of them. The good thing about a story is that each person can see something that speaks to them. When they asked me what stood out, I admitted that I have often felt that I was insignificant in the grand scheme of things and sometimes confounded that God would want to include me in his parade. I think a lot of people can identify with that.

I’d like to encourage you to believe that God delights in you and enjoys being with you. He sees all; He is not ashamed of you, and He loves to see you smile.

I’d like to encourage you to believe that God delights in you and enjoys being with you. He sees all; He is not ashamed of you, and He loves to see you smile. You are in the parade. You are valuable and your story is not only interesting, but powerful. Jesus has chosen to put his weight on you. You are carrying him to all parts of the world and when the world really sees him, they will cheer — and you will smile. You will know deep in your heart the cheers are for Him, and He deserves all the praise and glory. Some day “every knee will bow and every tongue will confess that He is the Lord of lords and King of kings.”

My Hope for Easter Sunday