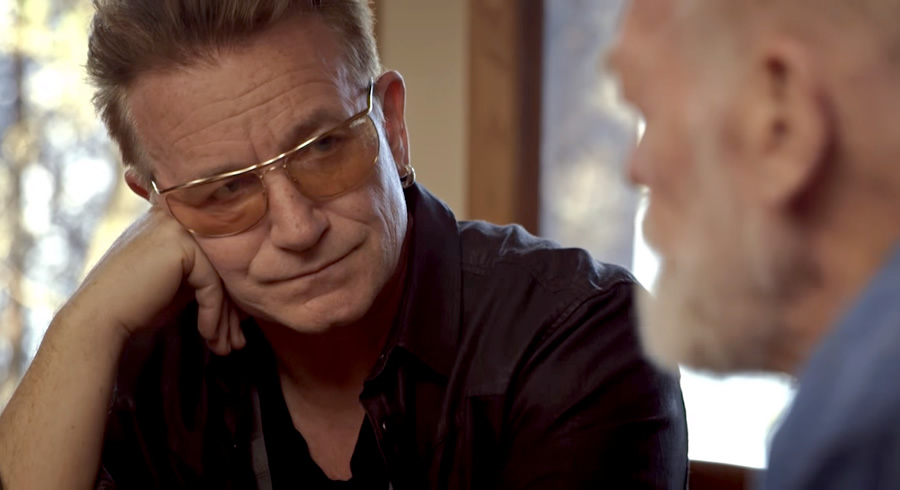 Those are the words Bono, the singer for the band U2, said live in 1983 to introduce the song “40.” It’s a song that I have recently revisited while writing a book about 2018. That’s when criminal opposition researchers, sociopathic politicians, and the corrupt media — a cruel triumvirate that I collectively call the American Stasi — tried to extort me and destroy my soul.

“40,” whose lyrics are taken from Psalm 40, has a special meaning for me because it reminds me of my high school friend Brett Kavanaugh. It’s a song that Brett and I both adored in high school. It represented the vitality of rock and roll, our Irish roots, and the Catholic faith we had been raised in. Whenever the song came on in a club or on the radio we’d smile at each other or crank it up. It was like a prayer we shared.

This isn’t one of the things about us that got reported in the press. As I’ve noted over the past year, in the the fall of 2018 the political left and the media tried to destroy Brett and me. They used long-planned opposition research, extortion threats from people who would eventually wind up in prison, and even an attempted honey trap.

“Remember that Bad Thing You Did? At Some Point During the 1980s?”

The focal point was a woman named Christine Blasey Ford. She accused Brett of sexually assaulting her in 1982 when we were in high school. Ford claimed that I was in the room when it happened. I found this out when I got a phone call from Ronan Farrow, the sloppy journalist, in September 2018. This came just after the news broke that Diane Feinstein had a letter that had something to do with Brett. Farrow informed me that I was mentioned in the letter and that the charge had to do with “sexual misconduct in the 1980s.”

Now, stop and think about the vagueness of that charge. I was being asked about nothing specific. Just something that had happened “in the 1980s” — as in, the entire decade. As John McCormick wrote at the time in The Weekly Standard:

Judge says he first learned he was named in the letter during an interview with the New Yorker… . The Kavanaugh classmate told TWS that the New Yorker did not provide him the name of the woman alleging wrongdoing, a specific date of the alleged incident, or the location where the incident is alleged to have occurred.

Can you say “Kafkaesque”?

Give Us the Man, We’ll Give You the Crime, Said Stalin’s NKVD

In May 2018 Farrow had dined with Michael Avenatti. Remember him? He’s the lawyer who just a week after the Blasey Ford charge would accuse me and Brett of being present at ten high school parties where girls were gang raped. Avenatti is now awaiting sentencing for extortion and has two more trials coming up.

The American Stasi wanted me, someone whose high school drinking had progressed into alcoholism before I cleaned up in 1990, to give them something on Brett. Anything, really. They were giving me an entire ten year span to do it. Surely the glamorous and hard-partying Reagan era could provide something, somewhere, somehow to bring Brett down. All I had to do was point and shoot.

The media would even help me “be a hero.”

Unpersoning the Scapegoats, Suiting up their Joan of Arc

Blasey Ford’s entire social media past was scrubbed. The Washington Post withheld an exonerating witness. They also used as a source a man who, by his own admission, has never laid eyes on me or Brett. Virtue-signaling lummox John Heilemann accused me of buying and selling cocaine, which I have never done. They even believed the ridiculous spectacle of Blasey Ford “crying.” If you can watch this video and, starting at the 55-second mark, do not think this person is acting, you shouldn’t be driving. Or riding a bike.

Now that almost three years has passed since the attack, people may be starting to understand what Brett is really like. He’s a thoughtful, decent judge who busted his tail getting to where he is, and loves the Constitution and America. His decisions so far have defended college basketball players and religious freedom. He loves his friends.

Of all the media reporting in 2018, only one writer on the left made a glancing effort to at least admit that Brett and I were not monsters. It appeared in, believe it or not, The Nation, a communist magazine.

The piece is by Timothy Don. Don was a year younger than us at Georgetown Prep and lived near me. We carpooled together before he left the school in 1982 due to a family move. In The Nation in October 2018, Don write that Brett and I “were both popular boys, and I remember them each with that mixture of fear and fondness that only a 14-year-old boy can feel toward well-liked upperclassmen.” Then this: “There is no question in my mind that Christine Blasey Ford is telling the truth.”

Don based this belief on how he remembers me:

[Judge] would be described in today’s therapy-laden culture as someone who “self-medicated” with alcohol. He watched The Benny Hill Show every night and tuned the radio dial every morning to whatever station was playing The Who. “Baba O’Riley” was a favorite. At pep rallies in the school gym before football games he’d come charging in and unabashedly make a fool of himself to get the howling and the cheers started. Maybe that sounds like just more prep-school grotesquerie, but it was also, for a 14-year-old, profoundly liberating. To be someone who didn’t give a damn. Someone who was confident enough to make a buffoon of himself in front of his peers. We’d be shoulder to shoulder in a group and he would rush up and literally throw himself into our midst, giggling and yelling, tackling someone and rolling off into the grass.

Don adds that “many of the boys at Prep — including me — were actually quite fond of him.”

Don then goes on to describe a football game at Prep. We were playing a school of mostly African-American students. There was a touch of racial tension, and after the game (which we won), one of them called Don over and then punched him in the gut.

I’m from the Suburbs: Punch Me!

“Mark Judge was at the car and he saw the whole thing happen,” Don wrote. “He looked at me and said, ‘Holy [expletive] man, are you OK?’ And he kind of put his arm around me (very unusual that, in an all-boys prep school, something that would get you called a ‘faggot’ in the 1980s), and he took my bag and threw it into the trunk.”

I didn’t say much more than, “Yeah, I’m OK.” There wasn’t really anything more to say. On the way home we stopped and he bought some beer at a 7-11 with his fake ID and we opened the car windows and drank it while listening to The Who. We didn’t say much or talk about the incident. I just wanted to forget it. I didn’t tell anyone about it, not even my parents, mostly because I was so weirded out by the whole thing and even more because I felt like I deserved it. Who was I, who were we? Privileged, white, prep-school boys. We had the money, the cars, the country clubs, the green fields, the happy homes. We had all of it, and we deserved a collective punch in the stomach.

The next week, Don got “called out of Latin class and into the dean of students’ office.” The dean, recalls Don

sat me down and very carefully and tenderly asked what had happened after the football game the previous Friday. I told him, we talked, and he led me through the confusion in a discussion of forgiveness and pain and injustice. It turns out that Judge had told him what he had seen, not to rat the other kid out, but simply because even Judge, this teenage drunk-ass idiot who would grow up to become a [expletive] writer with some very bad ideas indeed, had a soul. Had a humanity. Thought that someone needed some help.

Don also recalls spending a few days with Brett at a friend’s beach house: “There were no parties or girls. There was no beer. In the mornings we rode bikes and ate jelly donuts and played basketball for hours — Brett was good — and then went inside and drank pitchers of iced water over Monopoly games that lasted into the evening. It was harmless. Innocent.”

Yes, Don’s liberal self-flagellation is ridiculous. (“Punch me! I live in the suburbs!”) Still, he did try to reveal us as human. It’s just unfortunate that he leaped from Monopoly to gang rapes without batting an eye. Don may have left Georgetown Prep before taking the class on critical thinking.

Toss Your Friend to the Crocodiles, Save Yourself

But Don did capture some of the normality that was our lives. As teenagers Brett and I bonded over sports, rock and roll, and, yes, our boyish interest in girls. And yes, we went to parties, even while trying to make the grade at a very rigorous all-boys high school. In other words, we were normal teen boys in the 1980s. It’s true that I was always wilder than Brett, and that I developed a drinking problem in high school that lasted several years. You would think that liberals would appreciate a Supreme Court justice who had experience with a friend who had fought addiction. They are always taking about our leaders knowing real people with real problems. Brett does know such a person, and he got punished for it.

Brett was always a person of faith. He did his service project working in a soup kitchen in D.C., and never missed Mass on Sunday. Driving down to the beach, we’d play music — David Bowie, Prince, R.E.M., and crank it up when “40” came on:

We went to games, dances, and parties, yes. Yet even as young men we were searching for God. In our own very different ways, on paths so different and yet also fueled by the questing spirit of Ignatius Loyola, we’ve both found him.