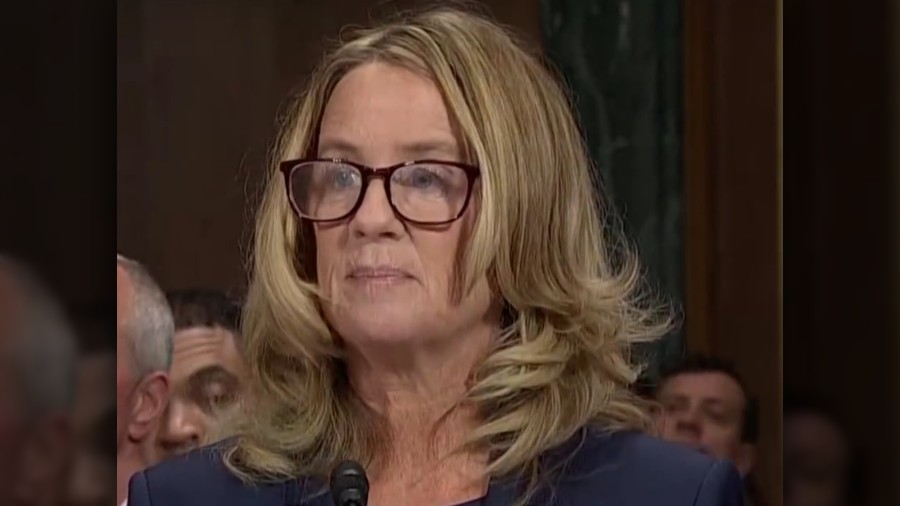 Christine Blasey Ford is sworn in to testify before the Senate Judiciary Committee on Capitol Hill in Washington, Thursday, Sept. 27, 2018.

There was one thing they weren’t expecting.

They didn’t think I would know the dragon’s true name.

On the night of September 14, 2018, I got a call from Ronan Farrow of The New Yorker. My high school friend Brett Kavanaugh had been nominated for the Supreme Court on July 9. Farrow was calling to tell me that Brett and I had been named in a letter claiming “sexual misconduct in the 1980s.” At the time of Farrow’s call the accuser had not been named. She turned out to be Christine Blasey Ford, a college professor in California.

A September 16 piece in the Washington Post followed. In it Ford claimed that Brett had sexually assaulted her when the two were in high school in 1982. Ford also claimed that I was in the room where the assault allegedly took place and that I witnessed everything before jumping in and breaking things up.

Their plan was simple. For the entire summer of 2018 Ford had been working with an opposition researcher named Keith Koegler. According to The Education of Brett Kavanaugh, Koegeler had “spent many hours that summer poring over news coverage of the nomination process, biographical information about Kavanaugh, and writings and videos produced by Mark Judge. In combing through YouTube, articles, and social networks, Koegler had learned more about the house parties … and the lexicon of 1980s Georgetown Prep than he had ever thought he would care to know.”

Koegler and others had set things up, and the next step seemed preordained: hit me with an unexpected allegation (Farrow) and get me to start talking. Then entangle my life, which has included a struggle with alcoholism when I was younger, with the life of Brett Kavanaugh, who had a much different journey than I. It was an oppo research hit whose lynchpin was me crumbling, babbling, and using my life to take my friend down, even if he had nothing to do with my struggles. Reading accounts of Ford’s behavior it becomes clear why she never went to the police or released her therapist’s notes (which never mention Brett Kavanaugh) and why she kept asking for delays. She was waiting for me to crack.

A Lesson from a Sci-Fi Classic

In her classic 1968 novel A Wizard of Earthsea, Ursula K. Le Guin creates an incredible fantasy world that also has layers of spiritual and psychological meaning. In Earthsea, every living thing has a hidden true name that defines its essence. Knowing something’s true name provides remarkable power. You can control a person, an animal or even minerals. Wizards in the book spend months studying the true names of every living thing.

In the best part of the story, the young wizard Ged sails to the island of Pendor to confront a dragon, who has been destroying local villages. The dragon speaks in a sinister, solicitous way, offering to help Ged while simultaneously mocking him – “twisting the true words to false ends, catching the unwary in a maze of mirror words each of which reflects the truth and none of which leads anywhere.”

There’s only one unexpected twist: because he has done long, hard research, Ged knows the dragon’s true name. Asked by the towering serpent what he could possibly have to threaten him with, Ged answers: “With your name, Yevaud.”

Then it happens: “When he spoke the dragon’s name it was as if he held the huge being on a fine, thin leash, tightening it on his throat. He could feel the ancient malice and experience of men in the dragon’s gaze that rested on him, he could see the steel talons each as long as a man’s forearm, and the stone-hard hide, and the withering fire that lurked in the dragon’s throat: and yet always the leash tightened, tightened.”

Of course, dragons go back long before Earthsea was written. The beasts are mentioned several times in the Bible. In the Old Testament, Leviathan appears in Psalms 74:14 as a multi-headed sea serpent that is killed by God and given as food to the Hebrews in the wilderness. In Isaiah 27:1, Leviathan is a serpent and a symbol of Israel’s enemies, who will be slain by God. In Revelation, the beast is described this way: “And the great dragon was thrown down, that ancient serpent, who is called the devil and Satan, the deceiver of the whole world — he was thrown down to the earth, and his angels were thrown down with him.”

In 2018 Christine Blasey Ford and her enablers sent a dragon to devour me and my friends and to destroy our village. But like Ged, I knew better than to start engaging with the beast. I knew the dragon’s true name, and that was enough. As Senator John Kennedy said when he saw the final FBI report done on the case, “This was about power and smash mouth politics, nothing more.” It was a tawdry political hit that had nothing to do with the search for truth.

When I didn’t give the left what they wanted when the story first broke, I think they were surprised. When a few days passed and I refused again, Leviathan became concerned. After even more time, they were forced to use their backup plan, rolling out tawdry, desperate and ridiculous allegations about drugs and gang rapes.

With each passing hour, the rope was tightening … not around me, but around the conspirators. They asked for extensions to testify, they made excuses, they launched attacks through the media. They scrubbed Ford’s internet history and tried to use my high school yearbook against me and Brett while memory-holing Ford’s salacious history and own yearbook. They protested, they yelled, they asked for an FBI investigation.

They claimed Ford, a lifelong and enthusiastic traveler to remote locations, was afraid to fly. They couldn’t produce any of the evidence they had cited, not even notes from Ford’s therapist. This had nothing to do with assault or parties or yearbook slang. It was, as Senator Lindsey Graham put it, “a bunch of garbage.” Graham also knew the dragon’s name.

After more than a week, Ford’s Leviathan grew truly malevolent and reckless. On September 24, 2018  – my birthday – I got a very sinister phone message from a California number. A reptilian voice on the other end told me I was about to be messed with (the caller used more colorful language), and then abruptly shifted to a slightly softer tone: “Hey, give me a call. We’ll work something out.” This was flat-out extortion, witness-tampering, Mafia-style strong-arming. The voice, both menacing and solicitous, was just as I imagined the sound of the voice of the dragon Yevaud in A Wizard of Earthsea. I could almost smell the smoke coming from the nostrils.

Call you back? I don’t think so.

I know your true name.