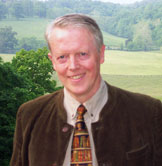 Christopher Manion < Back to Voices

Christopher Manion earned a Ph.D. in government from Notre Dame University, and has taught in departments of Politics, Religion, and International Relations at Boston University, the Catholic University of America, and Christendom College. For many years he was the staff director of the Senate Foreign Relations Subcommittee on the Western Hemisphere, chaired by the late Senator Jesse Helms, R-N.C.

For 10 years, Christopher Manion was a weekly columnist and contributing editor at The Wanderer newspaper. He has been a contributing editor and music critic for Saturday Review and High Fidelity magazines, and his op-eds and book reviews have appeared in The Wall Street Journal, National Review, The Journal of Economic Development, the National Catholic Register, and Western Horseman.

He is on the boards of the American Foreign Policy Council and the Population Research Institute, founded by the late Rev. Paul Marx, and was a founding Fideicomisario (Trustee) of Universidad Francisco Marroquin in Guatemala. He is a Knight of Magistral Grace in the Sovereign Military Hospitaller Order of Saint John of Jerusalem, of Rhodes, and of Malta. He and his family reside in the Shenandoah Valley in Virginia.

On Thursday night, President Trump mentioned the “Coyotes,” and all hell broke loose. Let me tell you about the Coyotes. First of all, the name. They earned it. They are ravenous wolves and they don’t bother with sheep’s clothing. The…

Pete Buttigieg and the Purple Cow

I Told An Immigrant To Go Home

Will Catholic Bishops Support Democrats in 2020?