Sojourners was afraid to insult the U.S. Catholic bishops, its partner in payola. 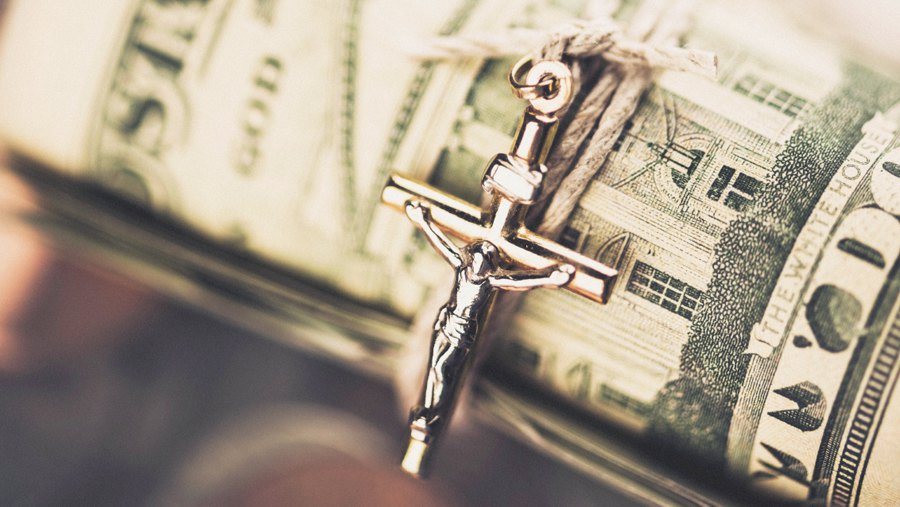 By Christopher Manion Published on September 6, 2020 •

A recent dustup on the Evangelical Left tells us many things. One of them is this: How far America’s Catholic bishops will go to get more taxpayer funding.

In July, Sojourners magazine, a stalwart in the realm of radical journalism, published an online article that ignited a furor. The fires are still burning.

Like many leftist outlets, Sojourners is obsessed with racism. “America Has Been Addicted to Whiteness for 400 Years,” reads one recent headline. “Who Will Call Out the President’s Racism?” reads another. And, introducing another favorite theme, “Donald Trump: Evangelist of White Nationalism” reads another.

None of this comes as a surprise. Rev. Wesley Granberg-Michaelson, Chairman of the Board at Sojourners, is a leader in Joe Biden’s “Faith 2020” team. There the message is all racism, all the time.

As we will see, with all that hype, one would think that the incendiary article would have fit right in with the party line. After all, it was sloppy and ill-sourced, but it screamed so loudly that somebody might actually read it.

Well, it looks like somebody did. And that’s the problem.

How so? Well, alongside its religious activities, the bishops’ conference publishes an endless stream of left-wing political materials. Martin focuses on their 2018 document condemning racism. What’s the problem? In that official 32-page “Pastoral Letter,” America’s Catholic bishops intentionally chose not to condemn “nooses” and “swastikas,” he complains.

For Martin, this deliberate omission proves that America’s Catholic bishops aren’t anti-racist enough. They should have been tougher on “white nationalists.”

Translated: “Hey, everybody, the bishops are providing cover for you-know-who!”

And who might these “sufficiently friendly” folks be? Well, Catholics like Nixon and Reagan advisor Pat Buchanan, or Kellyanne Conway, who until recently was President Trump’s senior policy advisor.

People like these undesirables represent “well-dressed Catholic nationalism,” Martin writes, and bishops are letting them get away with it.

Well, leftist screamers are ubiquitous these days, so one might yawn and move along to the Sunday crossword. But Martin apparently crossed a line, and therein lies a tale of woe, and wampum.

Circle the Wagons and Pass the Collection Plate

Sojourners was founded by Jim Wallis almost half-a-century ago. As its longtime editor, Wallis has become a significant leader on the Left. So after the Republicans dominated the congressional elections of 2010, Wallis organized the “Circle of Protection.” It’s a coalition of grifting nonprofits who between them receive billions of dollars a year in federal taxpayer funding.

“In late 2010, the newly elected Congress was focusing on deficit reduction,” reads the group’s website. “It became clear that it might disproportionately cut programs vital to hungry and poor people.” That meant that dozens of NGO’s — massive non-profit bureaucracies that administer poverty programs — were going to take a financial hit.

Wallis was worried. Even though he was a spiritual advisor to Barack Obama, he had little sway with the Tea Party, which had just swept the 2010 elections. So he went to his allies among the religious Left to form a coalition, a common tactic to secure federal tax dollars.

U.S. Bishops Were Key to Keeping the Cash Coming

One of the most influential groups Wallis recruited was “the conference,” America’s Catholic bishops.

For Wallis, the bishops were key. Their blessing was indispensable for his project’s success. But why would they give it?

The better question is, how could they refuse? To put it bluntly, they were broke. Scandals, lawsuits, and corruption had all taken their toll. So the bishops signed on, and Wallis’s “Circle” quickly became the “Circled Wagons,” a group of money-hungry do-gooders providing mutual protection and support in the always-vicious rampage at the federal trough.

Selling the Unborn for 30 Pieces of Silver

While they got the money, the bishops had to pay a political price. To insure support from Obama’s White House, they supported Obamacare. They opposed the health plan’s abortion coverage, but Obama funded it anyway. On Obama’s support of taxpayer funding of international abortions, the bishops proved their loyalty to the “Circle” by affirming its demand for full funding year after year

In addition to abortion, the foreign aid bill routinely contained some half a billion dollars for international contraceptive programs. These are both considered to be grave evils by the Church.

Bishop Howard Hubbard was the bishops’ point man for the Circle. So I asked him how he could support such immoral programs. He assured me that Catholics could disagree with his decision after “prayerful consideration,” but he did not apologize.

Another bishops’ NGO, Catholic Charities USA, went a step further to guarantee its taxpayer funding. In 2010, CCUSA hired the Sheridan Group, Washington’s premier “gay” lobbying firm. In spite of the Church’s formal opposition to same-sex “marriage,” their NGO’s simply needed influential advocates who were friendly to the new administration.

Well, it paid off. In 2010, CCUSA received $2.9 billion of its $4.7 budget from the federal taxpayer. (By the way, bishops did not share the news of the Sheridan contract with the faithful. The Washington Blade, the city’s homosexual newspaper, broke the story when it bragged about it in a July 14, 2011 front-page story.)

Thanks to Wallis’s leadership, his plan worked for ten years. The Circle’s unspoken rule was simple: “We all support full funding for each other’s programs.” Everybody went along and everybody cashed their government checks.

And then along came Eric Martin’s article.

Burning a Bridge Too Far

Insulted in public by their supposed partner, Catholic bishops were not pleased. After years of “doing their part” for the Circle, one of their closest allies in the group had just blasted them in public as a bunch of enablers of bigotry and racism.

Wallis was inundated. “What followed,” he wrote, “was not, as some have understandably assumed, just ‘pushback’ from the Catholic bishops (or ‘wealthy donors’) but a painful and angry outcry from Catholic friends and allies … .They were hurt. They felt betrayed. They felt that this article would jeopardize relationships of trust that have been built over a long time, and that this would harm our outreach to bishops and other church leaders who are now more ready than ever to take a stand. And I found myself agreeing with them.” [emphasis added]

So this was all about “hurt feelings”? Unlikely. Wallis continued:

“The article did generate significant outrage among many key Catholic but also other trusted partners, which seriously jeopardized our advocacy work, particularly through the Circle of Protection — our broadly ecumenical coalition over ten years that has been remarkably effective in preventing deeper budget cuts…” [emphasis added].

“Remarkably effective,” indeed. In ten years the Circle had greased the money machine to the point that they were virtually grandfathered in. Moreover, Wallis had coaxed many bishops to move closer to avowedly left-wing positions shared by others in the “Circle.”

This was a real crisis. Alienating the bishops threatened to cause not only a family feud, but an outright divorce. And a costly one at that.

So “On July 28, following backlash from Catholic leaders, Wallis removed the article from the site, saying it ‘made unwarranted insinuations and allegations against many Catholics.’”

Wallis couldn’t say it out loud, but he knew that “our dearest, closest, and long-term progressive Catholic allies” — the bishops and their NGO bureaucracies — had already been in the tank for years. Hey, people, the bishops were already doing everything right, why rock the boat? Sure, they voted last November to make abortion their “preeminent issue,” but that’s already gone down the Memory Hole! Now it’s all racism all the time, “Catholic” Joe Biden has their silent seal of approval. Sojourners’ chairman is leading Basement Joe’s “Faith 2020” team. So what’s the problem?

Problem? In fact, there wasn’t any. The bishops’ website was completely revamped this year to emphasize racism, not abortion, as America’s deadly sin. And on that issue, since 1979, the bishops have consistently taught that “most” whites are racists, nobody else can be, and whites are racists whether they know it or not. It’s “systemic,” you see.

So on the issues, the bishops already agreed with Eric Martin. Why did he have to rub their face in it?

The damage was done. Martin’s little rain dance was a tantrum too far for the bishops. For them, Wallis was the “Circle,” and they blamed him. Could the coalition stay unbroken if the bishops walked off in a huff? The grifting NGO’s, desperate for dollars after the pandemic, knew that would sink the “Circle.” That’s why they prevailed on Wallis to pull it.

When Ideology Trumps Even Money

But sometimes ideology prevails, even when there’s money on the table. Hard-liners liked Martin’s article. Why remove it, they demanded. If Catholic bishops are indeed “harboring a culture of hate,” as Martin alleges, shouldn’t the truth be told?

A lot of staffers at Sojourners supported Martin. So when Wallis pulled the article, all hell broke loose in the home office. Two assistant editors quit. Wallis, who has edited Sojourners for decades, was removed. In the end, the Martin article was put back online, with a minor correction (the bishops had indeed condemned “nooses” and “swastikas,” but they had apparently forgotten to condemn “Confederate flags”).

The mammoth bureaucracies of America’s Catholic bishops are out of control, defying Church teaching to get federal taxpayer funding for their secular programs.

The message: Sojourners had called Catholic bishops a bunch of bigot-enablers, and Sojourners was going to stick to its story. They were, after all, ideologues. Like Lenin, they weren’t just revolutionary, they were really revolutionary! Suddenly, Wallis was a Menshevik, a sellout, afraid to call out those corrupt Catholic protectors of white supremacism. So he had to be cancelled and publicly shamed, losing his position as editor of the journal that he had founded and made a real force on the Left.

The Abortion Party at Prayer

What do we learn from this? First, that the mammoth bureaucracies of America’s Catholic bishops are out of control, defying Church teaching to get federal taxpayer funding for their secular programs. Most Catholic faithful don’t know that, when they drop their envelope in the Sunday collection, they’ve already given last April 15.

That battle rages today, not only on the Evangelical Left, but within the U.S. bishops’ bureaucracies and NGOs as well. The bishops themselves are in no position to take control of their hired hands and quit the “Circle.” Desperate for cash, beset by lawsuits, and riven by factions themselves, they will take Eric Martin’s slap in the face and live with it.

Nothing will change. They need the money.