The October Surprise After Sixty Years 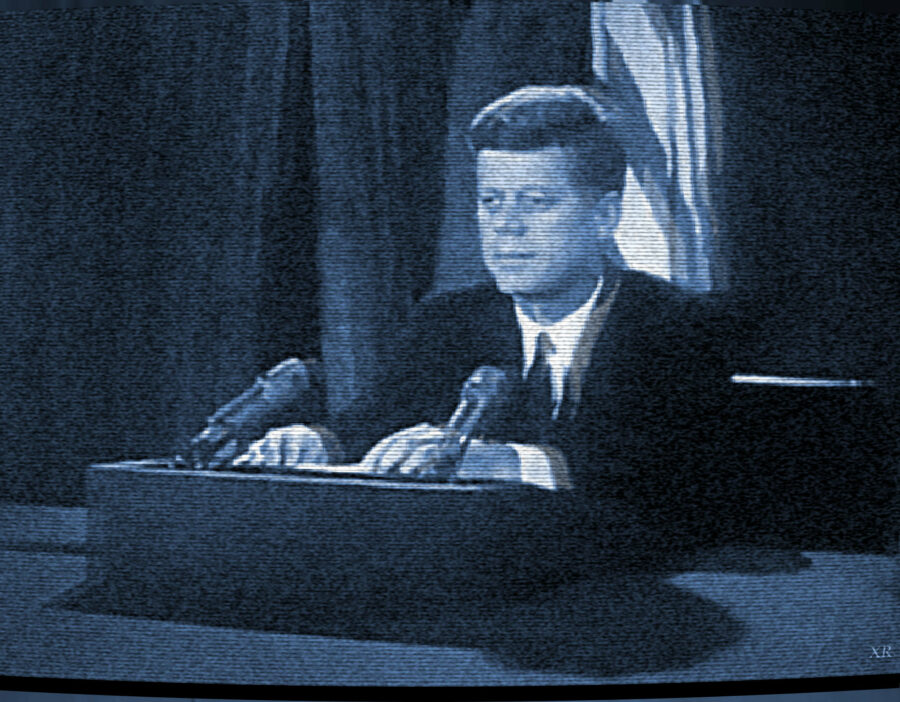 Two weeks ago, commenting on the war in Ukraine, Joe Biden said “We have not faced the prospect of Armageddon since Kennedy and the Cuban Missile Crisis.”

And this week is the sixtieth anniversary of that crisis.

JFK’s confrontation with Soviet Premier Nikita Khrushchev in October 1962 arose from the discovery in July that Russia had placed ballistic missiles in Cuba. It was resolved just days before the 1962 midterm election, when Kennedy successfully persuaded Khrushchev to remove them.

My focus here is on the political impact of that confrontation.

A Deal That Saved the Democrats’ Mid-Term Fortunes

But the 1962 midterms were a rare exception, he writes. JFK had botched the Bay of Pigs invasion in April 1961, and his summit with Khrushchev six weeks later was a disaster. By the time October 1962 came around,, Democrats were in the same sinking boat that they are today, expected to lose over 40 seats in the House alone.

But after the crisis ended and the “Kennedy-Khrushchev Accords” were agreed to, Busch writes that Democrats lost “a mere four seats in the House and actually gaining four seats in the Senate” in the midterm elections held a week later.

And that wasn’t all.

“Democrats also suffered no net loss in governorships,” he adds, “the only time the President’s party could say that from the 1920s to 1986. Some of Kennedy’s fiercest critics, like Senators Walter Judd of Minnesota and Homer Capehart of Indiana, went down to defeat, and so did Richard Nixon in his bid to become Governor of California.”

Those historic wins also led to historic gains. In the next two years, the 88th Congress passed JFK’s tax cuts, the Civil Rights Act, and the legislative core of LBJ’s “Great Society.”

Fast forward sixty years. Today Republicans are expected to gain 30, 40, maybe even 50 House seats on November 8th. A really strong “red wave” would give them a comfortable majority in the Senate, maybe 52-48 or even 53-47.

Poor Joe Biden. No one appreciates him, Democrats aren’t asking for his help, he’s irate, lashing out at upstart Republican governors and insisting that no one appreciates all the progress he’s made. “We’re changing people’s lives,” he told the AFL-CIO, and the people apparently aren’t too happy about it.

And for Joe, Vladimir Putin and his U.S. stooges, the “MAGA Republicans,” pose a danger to democracy that Americans just don’t understand.

Armageddon. Why would Joe Biden raise such a volatile issue with a bunch of rich New York Democrat donors at a private Manhattan fundraiser?

Does he really want to go toe-to-toe with Putin in the next ten days? Face him down, force him to rescind his threat to use nuclear weapons, maybe even resign from office?

Or, failing that, just put U.S. troops in Ukraine to up the ante a notch or two?

Waving his cowboy hat as he rides the nuke towards a Russian target to launch World War Three?

Well, Jack is back.

CBS News reports that the Army’s 101st Airborne Division has been deployed to Europe for the first time since World War II. Units are practicing with live tank and artillery rounds not far from the Black Sea across from Ukraine.

We should note that America’s entry into World War Two followed a constitutional Declaration of War by Congress. In fact, that was the last constitutionally declared U.S. war, and we’ve lost or bungled every one since.

At least the bipartisan War Party’s apologists can point to the United Nations or funding from a cowardly Congress in their justifications for Korea, Viet Nam, Iraq, and Afghanistan. But today, we have no-name mid-level brigadier generals in Europe following up on Joe Biden’s “Armageddon” outburst, darkly hinting that U.S. troops are ready to cross the border into Ukraine “if the fighting escalates” there.

No mod-level commander would raise that prospect without permission. And who would issue such an order? Is it General Mark Milley, Chairman of the Joint Chiefs of Staff? The same General Milley who’s spending most of his time forcing transsexual service members into our dilapidated military units worldwide?

Hardly. General Milley is “just following orders” as well. They’re coming from the top. Like Woodrow Wilson and FDR before him, Joe Biden wants war — and it’s all designed to protect his destructive domestic agenda.

After all, Vladimir Putin has threatened to use nuclear weapons in his invasion of Ukraine, and cautions the West not to assume that he wouldn’t.

Would the entry of U.S. troops into Ukraine give rise to Putin’s threat to use nuclear weapons? And a confrontation with Joe Biden?

Would that give Biden the opportunity to initiate talks with Putin?

The Democrat Caucus in the House would strongly condemn such talks, but Biden might find them a stepping stone to stem Democrat losses in both Houses by an instant replay of JFK’s 1962 deal.

It could all happen, if Joe could just make something happen to create at least the illusion of a 1962 JFK-style deal that avoids war with Russia, demonstrates his skillful mastery of foreign policy, and silences his MAGA critics for good.

A Brief Footnote To History

Perhaps the Kennedy-Khrushchev deal was not all that it seemed. The State Department fought tenaciously for years to keep details of the Accords secret. In 1983, Senator Jesse Helms (R-NC), Chairman of the Senate Foreign Relations Subcommittee on the Western Hemisphere, invited Secretary of State George Schultz to testify at a hearing on the subject.

Schultz erupted, refused, and finally agreed instead on a top-secret briefing in the Capitol’s most secure location. And it wasn’t until 1988 that open testimony in a Senate hearing on the Intermediate Nuclear Forces Treaty revealed that the United States had never verified that the missiles had actually left Cuba.

But while “Camelot” and the Kennedy cult lives on, such details are of concern only to a small community of scholars today.