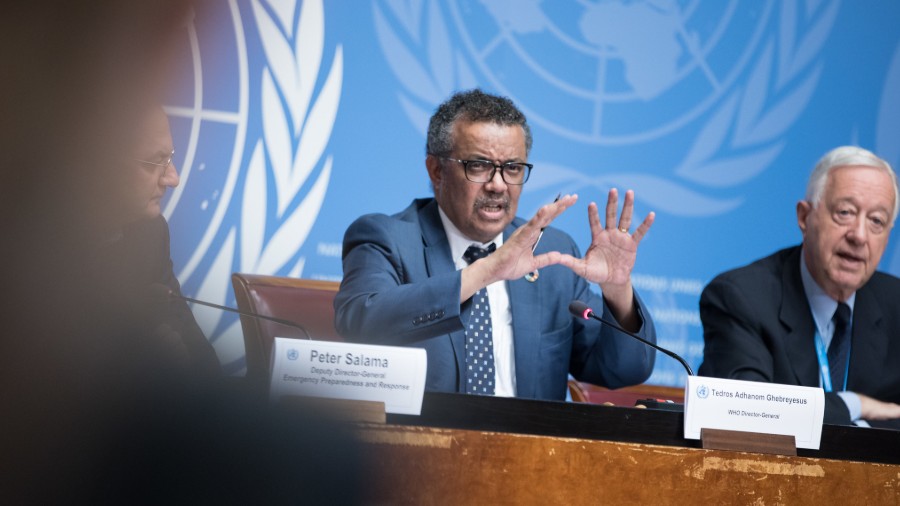 By Christopher Manion Published on August 5, 2022 •

The World Health Organization (WHO), still recovering from its disastrous management of the COVID-19 crisis, has decided to double down by asking for more power. And they’re demanding a new worldwide “Pandemic Treaty” to get it.

The WHO is the “specialized agency of the United Nations responsible for international public health.”

But that’s not all that’s special about the WHO. Its boss, Tedros Adhanom of Ethiopia, is a lackey of Communist China. And he plays his role well.

So instead of blaming China for covering up the outbreak of the virus in Wuhan, Tedros played lapdog. He cheered China’s “new standard for outbreak control.”

While China gaslighted the world on the virus, Tedros bragged that Xi had “bought the world time, even though those steps have come at greater cost to China itself.”

Xi Jinping repeatedly refused to allow a WHO team to investigate the Chinese secret Level Four biohazard research facility in Wuhan. (The military needed more time to clean up its mess there).

Did Tedros complain? No way. He was too busy blaming Donald Trump for calling COVID the “China Virus.”

“We know that no one ever seizes power with the intention of relinquishing it.” — George Orwell

The WHO blithely responded to its China Virus disaster not by firing Tedros, but by demanding that countries worldwide adopt a “Pandemic Treaty” to give it more power.

As Tedros put it, the WHO wants worldwide power to “strengthen the global health architecture to protect and promote the well-being of all people.”

Remember the Blue State lockdowns? Our churches, schools, and businesses closed for months by the diktat of unelected bureaucrats, all to “keep us safe”?

Ah yes: we couldn’t go to church, but the abortuaries were open 24/7. While the murders continued inside, pro-lifers who counseled mothers outside on public sidewalks were arrested.

And WHO cheered: after all, last March, WHO’s Craig Lissner insisted that “safe abortion is a crucial part of health care.”

But hey, so what? A WHO Pandemic Treaty could never force nationwide abortion-on-demand on the United States …

No problem! Tedros declared one anyway (and the media’s usual suspects reported with a straight face that Tedros “broke a tie”).

Immediately, the White House announced that Joe Biden was considering a proposal to declare MonkeyPox a “public health emergency.”

Nice work if you can get it.

But how did he get it?

According to Article VI, Clause 2, of the Constitution, treaties “shall be the law of the land.” A treaty binds “Judges in every State.”

That’s why Article II of the Constitution requires that, to be adopted, a treaty must receive the “advice and consent” of 2/3 of the Senators present and voting.

It’s unlikely that the Senate would ever ratify any form of a WHO treaty that hands over the control of the world’s health to Communist China through Tedros the Lapdog.

But Joe Biden’s State Department is undaunted. It’s carefully working with the WHO to schedule the adoption of the Pandemic Treaty’s final text for May 2024.

Oh, that just happens to be during the last year of Joe Biden’s current term.

So what’s going on?

Biden wants to destroy the Supreme Court’s Dobbs v. Jackson decision any way he can. He has issued countless “Executive Orders” and bureaucratic mandates to deny to the states the constitutional powers that Dobbs restored.

With Tedros’s “Pandemic Treaty,” Joe could declare that the WHO Treaty requires that “safe abortion” be considered “health care.”

And, as Lieutenant Columbo used to say, “Just one more thing.”

Biden doesn’t need the Senate’s “advice and consent” to do it. The President can reach an “Executive Agreement” with any foreign head of state. Say, Xi Jinping.

Once concluded, an Executive Agreement has the binding power of a treaty.

In fact, such “Executive Agreements” — made between a U.S. President and a foreign leader — have been employed by Presidents before to bind the United States with the power of a treaty not only during their term, but for years, even decades, thereafter.

And not only can the President bypass the Senate, he doesn’t even have to inform it.

The contents of the agreement can be kept secret — for years.

Time To Learn From The Past

At the Yalta Conference in February 1945, Franklin Roosevelt gave the Soviet Union control over 100 million Eastern European Christians. He also agreed to work with Stalin to create the United Nations.

Roosevelt was accompanied at Yalta by Secretary of State E.R. Stettinius, Jr.

More than 50 years after Yalta, the late M. Stanton Evans found Stettinius’s papers in the basement of the University of Virginia library. In those papers Evans found that, when Stettinius was asked by officials at Yalta for details about the proposal to create the U.N., he routinely replied, “Ask Alger.”

Alger Hiss was then the head of the State Department’s Office of Special Political Affairs. In May 1950 the FBI confirmed that Hiss was a Soviet agent — corroborating the allegation made by Whittaker Chambers in congressional testimony four years earlier.

So in sum: a Communist spy guided FDR’s embrace of the “Executive Agreement” reached at Yalta — and its details were kept secret for years.

It was an outrage.

To prevent another Yalta, in 1953 Ohio Senator John Bricker proposed a Constitutional Amendment prohibiting any “Executive Agreement” that conflicted with the Constitution. The Bricker Amendment also required that any treaty would acquire the status of U.S. law only after Congress enacted its terms in legislation.

My father, the highest-ranking Democrat in the Eisenhower Administration at the time, was a chief proponent of “Bricker.”

The amendment failed by a narrow margin, and Ike, prompted by Secretary of State John Foster Dulles, fired my father.

So “Executive Agreements” were still fair game. And one of the most famous was consummated nine years later in the “Kennedy-Khrushchev Accords” of October 1962.

Their contents were labeled “Top Secret” — and administrations of both parties fought for years to keep it that way.

Khrushchev had “ordered” that Soviet missiles be removed from Cuba, we were told in 1962. Why, we even saw aerial pictures of the Soviet ships hauling them away!

It was only 25 years later that a Defense Department official addressed the Kennedy-Khrushchev Accords in public.

At a Senate hearing on the Intermediate Nuclear Forces (INF) Treaty in 1987, a senator recalled Ronald Reagan’s invocation of the Russian proverb, “doveryai no proveryai” (“Trust but Verify”).

Had the United States Government ever verified that the Soviets had removed the missiles, he asked.