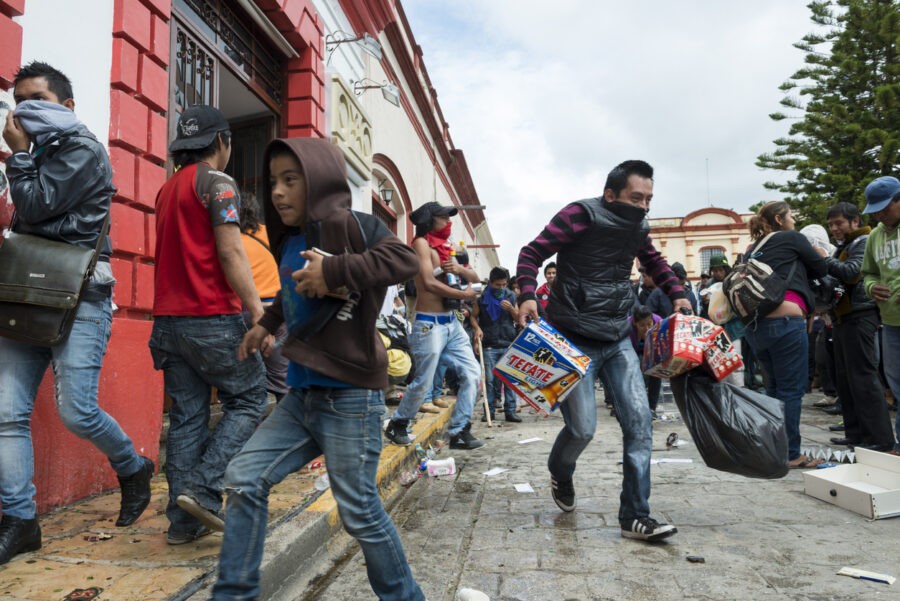 Looters are ruling the streets in a lot of American cities, and it isn’t pretty.

I worked in Chicago in 1968. I remember well how Mayor Richard Daley, responding to a night of rioting and general mayhem, ordered police “to shoot to maim or cripple anyone looting any stores in our city.”

But that was then.

These days, police are trained not to shoot, and looters run free in the Windy City’s Magnificent Mile.

Trip Advisor calls it “one of the great avenues of the world,” but the criminals keep on coming, customers aren’t coming, and many retailers are just throwing in the towel.

They’re tired of the criminal mobs stealing everything in sight and getting away with it.

More than a few Chicagoans might be quietly pondering a forbidden phrase these days: “You know, if they just shot a couple of looters, most of these criminals would just stay home.”

As Russell Kirk told us at the Heritage Foundation over 40 years ago, when people are forced to choose between security and freedom, they will always choose security.

Chicago shoppers and the stores aren’t the only ones who are hurting. Everybody is.

The City of Chicago is losing a lot of money, of course, and a lot of respect. The rampages hit everything from high-end millionaire boutiques to local drug stores.

And all of it goes unpunished.

Of course, the Windy City has other problems. The mayor is a foul-mouthed disaster who hates the cops, the State’s Attorney is a leftist and accused domestic abuser, and the stench of Jussie Smollett still hangs dank and dark over the justice system.

So retailers are on their own, and they’re at their wit’s end. Hire “security guards”? Oh, great — all they can do is tell employees to go hide somewhere. Carry a gun? You’ll go to jail, and the career criminal won’t.

Nothing works. Everyone is looking for solutions.

I have one here.

I’ve lived and traveled in Latin America for over 60 years. Retailers there have a different security system than we do. They have to — they can’t rely on the corrupt cops, and there are simply too many crooks with too many guns.

It’s a fact, Latin America is full of guns. Remember “Fast and Furious”? That’s where Eric Holder played gun-runner for the Mexican Coyote Cartels and — as Democrat criminals routinely do in DC — he walked.

In Mexico, gangs traffic in drugs, illegal aliens, money laundering, and guns. They shoot people all the time.

Mexico is the most dangerous country in the world for Catholic priests, and you wouldn’t want to be a judge there either.

In Guatemala, people don’t bother going to court to sue somebody. It takes a lot of bribes, and it also takes years. So folks in that situation find it much easier simply to hire a gang to shoot the other guy.

In Honduras, gangs run not only the prisons, but much of the country as well. Tegucigalpa, its capital city, is a finalist in the “Murder Capital Of The World” contest every year.

But retailers in those countries and many others south of the border rely on a security system that I first learned about in El Salvador 40 years ago. It was the number one option for businesses looking to make sure they aren’t robbed all the time, and I saw it work close-up.

The businesses hire “private security.” And it works.

Of course this “solution” relies on street logic and street justice. It isn’t perfect, but some exasperated store owners might choose it as a last resort.

Trouble is, it wouldn’t last.

Every neighborhood in San Salvador, the country’s capital, has several gangs. The gangs have “territories.” So retailers pay “protection money” to the gang that rules their territory. If the store is robbed, the gang finds out who did it and it kills them.

Learning from Our Southern Neighbors

Chicago has a lot of gangs. One site estimates that 100,000 members belong to one or more of 59 gangs that saturate Chicago’s neighborhoods and streets.

The gangs do a lot of shooting, but mostly they just shoot members of other gangs — and, of course, a generous selection of random victims, whom they rob, or rape, or carjack, or kidnap — you know, that kind of stuff.

And nothing happens to them.

And that’s a good thing.

But Chicago’s gangs are shooting people all the time. So why not copy the Latin American model and stop the looters that are ruining their businesses while the cops are busy fighting with the mayor?

After all, just ask Latin American retailers: it’s a deal that works. If a looter mob robs a customer of a store protected, say, by Chicago’s Gangster Disciples or the Vice Lords, the word will get out. As soon as an unsuspecting flash mob of pillagers like this one hits a store on the the Miracle Mile, the protection gang will “discipline” a few of them.

Look, the retailers can’t shoot looters. The police sure can’t. But Chicago’s gangs are shooting people all the time.

And if those looting mobs thought they might get shot for stealing a couple of handbags or cell phones, wouldn’t most of them just stay home?

Chaos And Its Discontents

Of course this “solution” relies on street logic and street justice. It isn’t perfect, but some exasperated store owners might choose it as a last resort.

Trouble is, it wouldn’t last.

You pay the Lords for a few months and you’ve got peace and quiet, safe streets, and satisfied customers. But then the Disciples show up, and offer you another deal.

Any two or three punks can form a “gang” and demand “protection.” Refuse, and their guns are just as lethal as anybody else’s.

That’s the way it works south of the border. What sounds like an escape hatch turns into a dead end.

Chicago and other cities in America’s Blue Third World are already collapsing in corruption and crime. And as Russell Kirk told us at the Heritage Foundation over 40 years ago, when people are forced to choose between security and freedom, they will always choose security.

Which is why they’re letting it happen.

They all think they’ll win in the end.

And if they do, we lose.