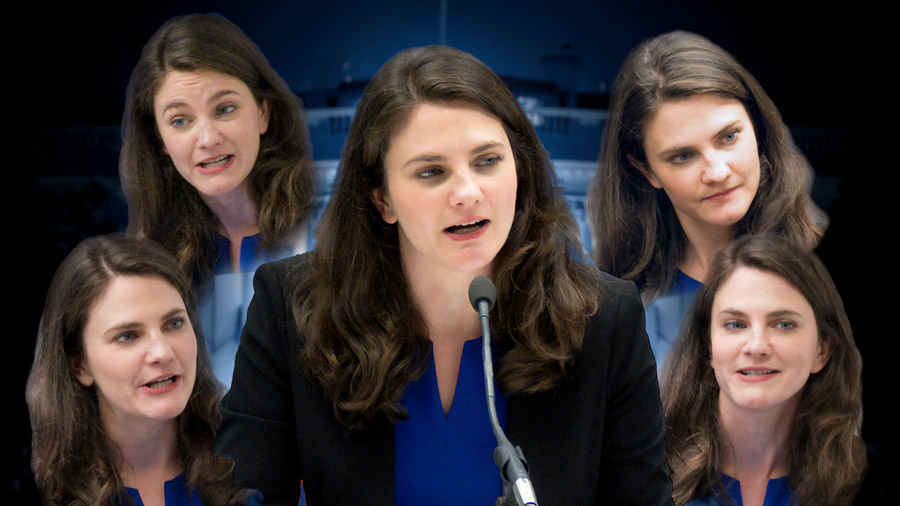 The Daily Caller News Foundation has a helpful profile of “Disinformation Governance Board” head Nina Jancowicz, the self-described “Mary Poppins of Disinformation.”

Unfortunately the Biden Administration is full of Ninas, top officials who cheerfully and deliberately misinform — what our mamas called “lying” — all while acting as if the public were the problem.

Take the news from just the past few days.

When he wasn’t declaring Jankowicz “absolutely” political neutral, DHS Secretary Alejandro Mayorkas declared he had “operational control” of the border. This clearly is false. A howler worthy of Baghdad Bob. Unless letting hundreds of thousands of illegal immigrants into the country is “control.”

Mayorkas is a Nina. He made that statement knowing full well that DHS has worked overtime to prevent media coverage of the border and immigration facilities. He’s not just stiffing the media, but even members of Congress. Recently, a group of elected representatives had a nocturnal visit to the border blocked by DHS.

Saying you have things in hand while denying Americans and their representatives from seeing for themselves makes you a Nina.

Meanwhile, has Mayorkas apologized to the border agents who were accused of whipping Haitian migrants trying to sneak into the country? It was known within hours the agents were just holding horse reins. Yet Mayorkas, Biden, Harris, Psaki, et al, condemned the agents and spent months “investigating.” The agents were cleared. But no apology for the fake news and the smearing of our brave agents.

Ninas never apologize. Never explain. They just swish into the next song-and-dance.

They did it with “climate change.”  Now here they come with “gender-affirming care” for children. Stifling debate while claiming there is no debate. That’s a standard number for Ninas. Deputy HHS Secretary Rachel Levine declared last week that all pediatricians agree chemical castration and genital mutilation of children under the guise of “gender-affirming care” is just spiffy.

That there is no debate within the pediatric community. To quote, Levine told NPR “There is no argument among medical professionals — pediatricians, pediatric endocrinologists, adolescent medicine physicians, adolescent psychiatrists, psychologists, etc. — about the value and the importance of gender-affirming care.”

As Madeleine Kearns said plainly in National Review, “This is an egregious falsehood.” There has been “an unmissable and international debate within the medical profession.”

This as a new report out of Sweden found 13 transgender children out of 440 treated by the Karolinska University had suffered catastrophic injuries as a result of puberty blockers. And as the Daily Mail reports, several European countries are debating the prohibition of such blockers.  And sounding the alarm.

The Stream has also profiled several medical professionals and pediatric organizations who are aghast at what ghouls like Levine are up to. For example, The American College of Pediatricians.

Why say there is a consensus when there obviously isn’t one? One explanation is rhetorical. If there isn’t a consensus, then you’re forced to acknowledge that these treatments are medically controversial and experimental. Obviously, that makes them unjustifiable. Especially when the alternative, watchful waiting, worked so well.

No argument, Levine? That’s a flat out lie. Unless by “no argument” you mean “no allowing for other opinions.” And that’s what makes you a Nina.

Levine’s boss, HHS Secretary Xavier Becerra is also a Nina. Last week, Becerra claimed before a House Committee that his agency does not have any explicitly “anti-racist” policies.

As DCNF reports, he was asked by Rep. Gary Palmer (R-Ala.) about a “recently enacted HHS rule that provides a financial incentive for doctors to create and implement so-called ‘anti-racist’ policies.”

Becerra said that no such rule exists and blamed “misinformation.”

Oh really? The organization Do No Harm tweeted out an image from an HHS fiscal planning document that specifically lays out the creation and implementation of an “Anti-Racism Plan.”

This document clearly details the creation and implementation of an “Anti-Racism Plan” to ensure that clinics “are aligned with a commitment to anti-racism and an understanding of race as a political and social construct, not a physiological one.” pic.twitter.com/rusPIK42CL

See the full DCNF story here. See why Becerra is a Nina.

Press Secretary Jen Psaki Offers Reporters Copy of Binder. The One Who Asks for It is Denied

White House Press Secretary Jen Psaki is a Nina on Adderall. In comparison to her daily run of deceit and spin and snake news, this next item may seem trivial. But it’s so, so telling.

To counter, Psaki held up a 385-page binder she said was the information shared with Congress. She told the White House press corps: “You can have access to this for a prop if you would like it as well. We’ll make copies for you.”

Oddly, only one reporter took Psaki up on her offer: Rachel Cohrs of STAT news. (The rest must have been too busy primping and prepping for the White House Correspondents Dinner.)

Cohrs reports that the White House refused to make her a copy, as promised. The White House wouldn’t even let her photograph the pages. Cohrs was granted only one hour to look over the binder … under the supervision of a budget office employee. And guess what? Specifics about where money was going weren’t even in there.

There were none of the documents that would have explained how White House officials chose to move around money between accounts, which they did repeatedly. Those documents would indicate that the funding wasn’t spent exactly how Congress intended. The Biden administration was also supposed to send Congress plans for how to spend Covid-19 relief every two months, but those documents weren’t included either.

The Ministry of Truth

This quick survey shows us that the “Disinformation Governance Board” is not just a board within DHS. Disinformation governance is the operating principle of the Biden Regime.

Or is Barack Obama the director-choreographer of this scheme, as Tulsi Gabbard suspects?

Either way, we can’t fixate on the showtune belting, Mary Poppins of Disinformation. Because all Nina Jankowicz and her fellow Ninas are doing is singing Obama and Biden’s tune.

The tune sung by totalitarians throughout history.