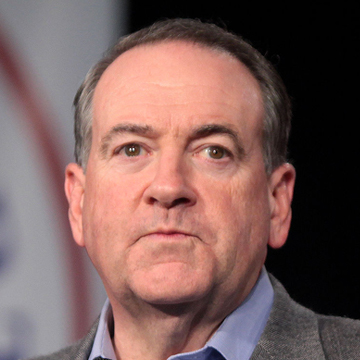 Mike Huckabee < Back to Voices

Mike Huckabee is the former governor of Arkansas, a 2008 candidate for the U.S. Presidency, and longtime popular conservative commentator on issues in culture and current events. An ordained Southern Baptist minister, Gov. Huckabee was host of the number-one rated weekend television show Huckabee on the Fox News Channel from 2008-2015, as well as host, from 2009-2015, of The Huckabee Report, which aired three times daily on nearly 600 radio stations across the nation.

A New York Times best-selling author, he is the host of the popular weekly talk show Huckabee, which airs exclusively on TBN.

On Wednesday, Newsweek ran an exclusive story saying the raid on Mar-A-Lago came following reports from an FBI confidential human source (CHS) — that’s official terminology for “mole,” “informant” and “spy” — from inside Trump’s home. (NOTE: this sure looks…

The Raise Your Taxes Act

Why Pelosi Went to Taiwan: An Educated Answer!

The Details of the ‘Inflation Reduction Act’ Are Public