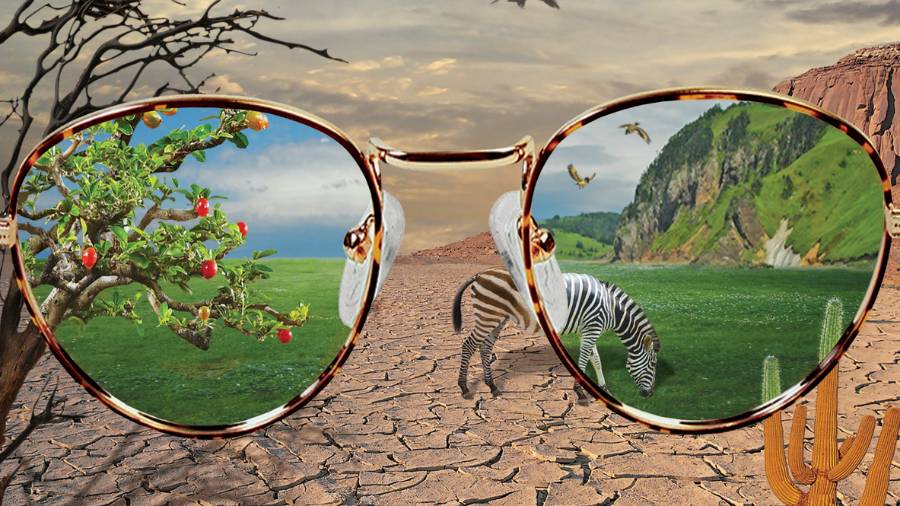 We find this same principle in 2 Thessalonians 2, but this time in terms of delusional beliefs, as those who reject God’s truth will end up following the Antichrist.

The coming of the lawless one will be in accordance with how Satan works. He will use all sorts of displays of power through signs and wonders that serve the lie, and all the ways that wickedness deceives those who are perishing. They perish because they refused to love the truth and so be saved. For this reason God sends them a powerful delusion so that they will believe the lie and so that all will be condemned who have not believed the truth but have delighted in wickedness. (2 Thessalonians 2:9-12)

Notice carefully: God Himself sends these persistent unbelievers “a powerful delusion.” They are hardened in their sin, just as Pharaoh was in Exodus. (For a detailed treatment of the Hebrew verbs involved in the biblical account, see here.)

In other cases, as with the texts just referenced, God actively gives people over to delusion and deception. This is the judgment they experience for refusing to yield.

Biden, we were told, was not actually installed as our 46th president. It appeared to be him but was not. Trump is still in control. Soon enough the whole world will see.

Today, we are witnessing a similar phenomenon, be it with people reaping what they have sown or with God giving them over to delusion. Either way, it is frightening to watch this unfold here and now, right in front of our own eyes.

For example, some who continue to believe in the QAnon conspiratorial myths are now espousing even more extreme and bizarre theories.

There can be no reality check because reality no longer has any meaning.

When There is Only Perception

It was one thing when, in the days before Joe Biden’s inauguration, the conspiracy theorists told us that the thousands of National Guard troops that flooded the Capital were there to install Donald Trump, not protect Biden.

Yes, we were assured, both Biden, Mike Pence, and others would be arrested, and Trump himself, the rightful president, would be inaugurated.

The theory was bizarre and preposterous, without any foundation in fact, yet the inauguration had not yet taken place. But for those given over to delusion, the events of January 20th presented no problem at all.

Biden, we were told, was not actually installed as our 46th president. It appeared to be him but was not. Trump is still in control. Soon enough the whole world will see. (For a variation of this, actually fact-checked by USA Today, see here.)

This is the madness of delusion. There are no facts. There is no reality. There is only perception.

Many Have Woken Up

Thankfully, many QAnon followers did wake up. They had their reality check, with many commenting, “We’ve all been played.”

As Forbes reported, “As Joe Biden was sworn in as president, QAnon followers finally saw their hope for the ‘storm’ — when President Donald Trump would bring down the ‘deep state’ and expose a far-reaching child-sex-trafficking ring — disappear, leaving followers of the unhinged conspiracy theory in despair and searching for answers, while one of the most prominent adherents gave up.”

On the Christian charismatic, spiritual front, we’re witnessing a similar phenomenon when it comes to the failed Trump prophecies.

Some leaders have apologized for their wrong words, however well-intentioned the prophecies may have been. And many believers have recognized that these prophetic leaders have erred, calling for honesty and accountability without throwing them under the bus.

Digging in Their Heels

But many others have dug in their heels.

Some of those claiming the mantle of prophet have told us that Trump has actually been inaugurated by God, and that it is he, not Biden, who is currently the legitimate, even governing president.

Others are insisting that the big turnaround is still to come, with new dates set for March or April or sometime in the next four years(!). Yet these very same voices guaranteed us that Trump would be inaugurated on January 20th, reaffirming their words in the days leading up to that date. Why the need to shift the dates now? Did God lose track of the time?

As for those of us who would call for accountability, based on clear New Testament principles (see 1 Corinthians 14:29; 1 Thessalonians 5:19-21; 1 John 4:1), we are accused of attacking the prophets, or criticizing the prophets, or shaming the prophets. “Don’t touch God’s anointed,” we are told with threatening intonation. God will strike us if we do.

Time for a Reality Check

Still, it’s one thing for those who made the failed predictions to defend themselves. It’s another thing for their followers to do so as well, castigating anyone who would dare point to reality. As one of my colleagues noted, it is a bizarre fulfillment of what God said through the prophet Jeremiah over 2,500 years ago: “A horrible and shocking thing has happened in the land: The prophets prophesy lies, the priests rule by their own authority, and My people love it this way. But what will you do in the end?” (Jeremiah 5:30-31, my emphasis.)

The path to delusion has many roadblocks along the way. One of those is called reality. Once we deny that, we are well on our way to dangerous deception.

So, to one and all I say: it is high time for a serious reality check. Those who truly love God will never be hurt by the truth.