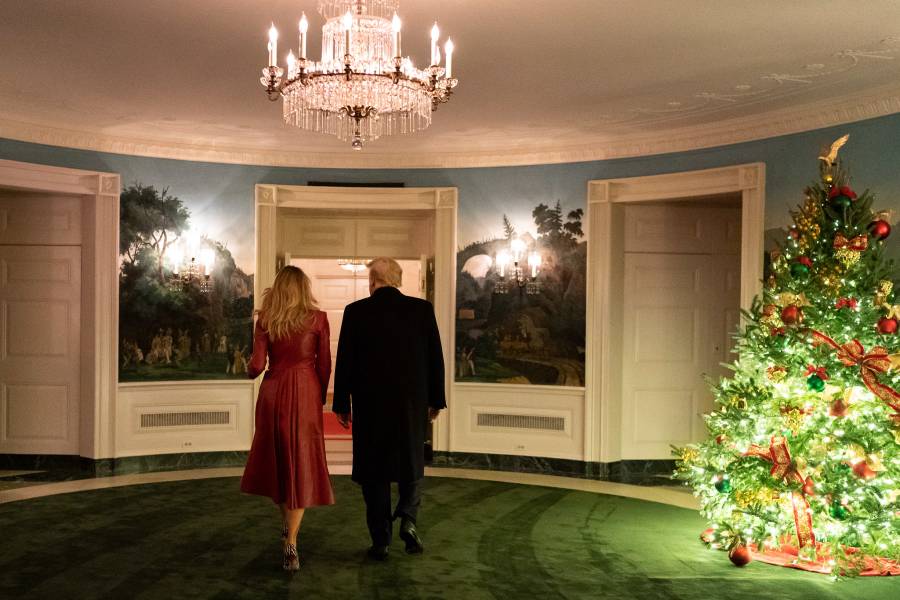 President Donald J. Trump and First Lady Melania Trump walk together in the Diplomatic Reception Room of the White House Saturday, Dec. 5, 2020, returning from their trip to Valdosta, Georgia.

This is not the time for flights of spiritual fantasy. Either the charismatic prophets who declared unanimously that Donald Trump would be reelected to a second consecutive term were right or they were wrong. Either there is going to be some last minute, seemingly miraculous intervention that overturns the vote of the electoral college, or Trump will not serve a second consecutive term.

There is no middle ground. There is no third option. There is no reality in which Trump actually did win but in fact didn’t win. Or in which he’s the president in God’s sight but not in man’s sight.

Not a chance. To entertain possibilities like this is to mock the integrity of prophecy and to make us charismatics look like total fools. (To our critics, we already do look like fools, but that’s another matter. Sometimes truth itself can seem foolish to those who reject it.)

To be clear, I myself am a charismatic, having spoken in tongues since January 24, 1972. I have even been called the leading apologist for the charismatic movement by those outside of the movement. And I am a strong believer in prophetic ministry today, having participated in it on different levels over the years.

Not only so, but some of the prophetic voices most clearly proclaiming a Trump victory (even to this moment) are respected colleagues, genuine men of God. Some are even friends. And if they end up being wrong, I will not throw them under the bus. Instead, I will do my best to meet with them, together with other leaders, and ask, “What went wrong? How could so many miss it together so badly? How could so many claim to be speaking for the Lord while at the same time misrepresenting His voice?”

These will be serious questions and there must be serious accountability, reflection, and even repentance.

That’s why it’s important that we lay out the options plainly now: they were either right or wrong.

“But,” someone will say, “what if the prophecies expressed God’s desire but were contingent on our faith?”

In theory that could be an option. But it evaporates when someone says, “I guarantee it. Joe Biden will not serve a single day in the White House. Trump will serve another four years.”

Plus, even when the words have not been that direct, there has been plenty of faith for Trump’s reelection. That’s why so many believers were shocked when the votes went Biden’s way.

And in any case, if we could blame unbelief on every prophecy that was not fulfilled, all accountability would go out the window. “You see, my prophecy over you was true. God promised that you would be a billionaire within 12 months of my word, but you didn’t have enough faith. It’s on you.”

Too bad the false prophets in biblical days didn’t figure this excuse out. It might have saved them from being stoned as false prophets.

“But,” you say, “I’ve heard Christian leaders say that Trump will end up serving this next term and that massive fraud will be uncovered, but only if we pray enough.”

To that I say: I have never seen so much mobilized prayer in my life. If prayer was going to do it, Trump would be president until he was 90.

No, the fact is that either these prophets heard accurately from God, as some of them did more than four years ago when they said Trump would be our next president, seemingly against all odds, or they did not hear accurately from God. Period.

Let us not make a mockery of truth.

A friend sent me a video where a prophetic leader now claims that the real results will not be made manifest until March. Inauguration Day, he declared, will have no meaning.

And on and it will go until reality has been exchanged for fantasy — and in the name of the Holy Spirit at that.

To witness this unfold is as heartbreaking as it is scary. Where does it end?

In the church where I came to faith in late 1971, the pastor told us an amusing story.

A guest speaker was ministering to the congregation, and after the sermon, he had some personal prophetic words for the people.

When they got in the car, they were both very excited.

The wife said, “The man of God told me we’re called to be missionaries and we’re going to India!”

He replied, “No, the man of God told me we’re called to be missionaries and we’re going to China!”

Confused, they went back into the building to ask for clarification, explaining to the speaker that he gave them two conflicting prophecies.

He smiled and said, “No, there’s no contradiction. God is calling you to Indochina.”

I appeal to my prophetic friends and colleagues (and those I don’t know personally), please don’t play spiritual games like this. Please don’t bring further reproach to the name of the Lord whom we love and serve.

Will you sign on the dotted line and make that “no excuses” and “no rationalizations” commitment today? The world is watching.

(See here for my extended video on this subject.)