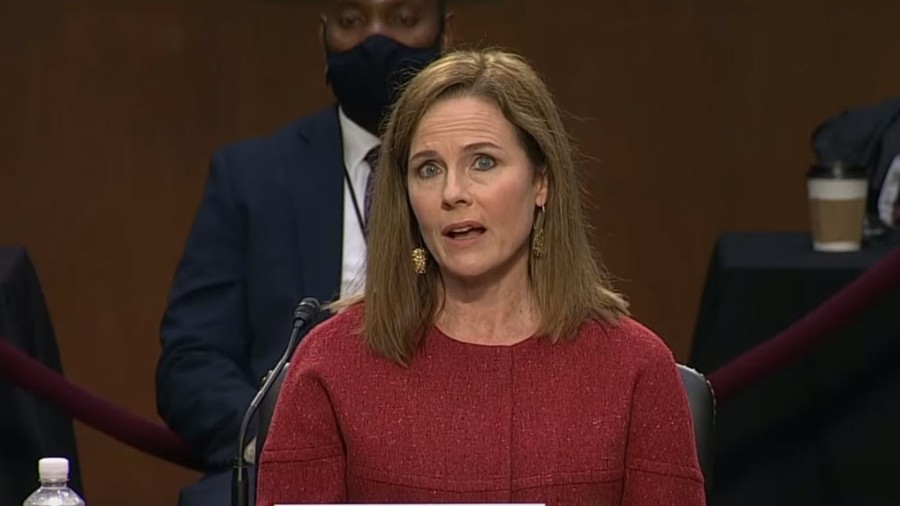 During her interaction with California Senator Diane Feinstein on Tuesday, Supreme Court nominee Amy Coney Barrett used the forbidden term “sexual preference” with reference to LGBT sexuality. Not only did this cause an instant internet firestorm, but it apparently led to an instant adjustment in a major online dictionary. The term is now officially “offensive” when used in the sense of “orientation.”

To give the background, Feinstein asked Barrett if she would “vote to roll back hard-fought freedoms and protections for the LGBT community.”

That was a crystal-clear answer. She would not discriminate against the LGBT community based on sexual preference. That was the legal question at hand.

But that was not what got the attention of other senators, including Hawaii Senator Mazie Hirono. She argued that “sexual preference” is a term “used by anti-LGBTQ activists to suggest that sexual orientation is a choice. It is not,” she said. “Sexual orientation is a key part of a person’s identity.”

Barrett replied, “I certainly didn’t mean and would never mean to use a term that would cause any offense in the LGBTQ community.”

But the cat was out of the bag. Barrett had tipped her hand. This woman is a religious fanatic and a bigot and a homophobe. She is obviously not fit for the Supreme Court. Away with her!

Hirono also noted that when the Supreme Court narrowly decided to redefine marriage in 2015, the majority opinion claimed that “[homo]sexual orientation is both a normal expression of human sexuality and immutable.” (See here for Justice Kennedy’s actual statement.)

He, along with countless others, would also tell us that homosexual desires and attractions are hardly immutable.

Interestingly, even the Washington Post pointed out that, “Plenty of figures on the left — including Democratic presidential nominee Joe Biden and the late Justice Ruth Bader Ginsburg, whom Barrett is hoping to replace on the high court — have also used the phrase, which was considered acceptable as recently as a decade or two ago.

“But,” the Post added, “in a heated, highly polarized confirmation process that has brought questions of religion and gender into the forefront, LGBT advocates and Supreme Court watchers said her word choice may have been more telling than it seemed.”

Was Barrett unaware that saying “sexual preference” would cause offense? Was it an innocent slip of the tongue? Was she sending a not-so-subtle message to other Christian conservatives? Or did she simply share her own viewpoint without thinking through the consequences?

Right now, only she can answer that question.

What we’ll address here is twofold. First, is there any truth to the term? Second, what can we learn from the reaction to Barrett using the term? In particular, to a major dictionary quickly changing its definition of the word?

Is There Any Truth to the Idea of Sexual Preference?

That’s why “sexual preference” is deemed to be an offensive and even dangerous concept.

After the early premiere of the In His Image movie Tuesday night in Oklahoma City, I spoke with an ex-gay man who told me his own story. He explained how he realized he was same-sex attracted at the age of 6. This was certainly not his preference or choice, and he spent many years trying to “unchoose” his sexual and romantic attractions.

At the same time, this man now identifies as ex-gay. Jesus has touched his life, and he no longer lives the way he used to live. And he does not agree with the Obergefell opinion that “[homo]sexual orientation is both a normal expression of human sexuality and immutable.”

How does the open-minded, tolerant, LGBT community respond to the heartfelt, often heart wrenching testimonies of ex-gays? It denies their existence or labels them outright liars. In the words of one gay blogger, “How many people do they have to [expletive] up to get a handful who claim that conversion therapy works?” (For the LGBT use of the term “conversion therapy,” see here.)

What we can say is this: 1) the vast majority of those who identify as LGBTQ truly believe that this is who they are and that change is impossible. 2) Their sexual desires and romantic attractions are, in fact, deeply rooted in their lives. 3) But it is entirely their choice (or preference) to identify as LGBTQ and to act on their perceived sexual orientation.

As for what science has to say about the possibility of change, this link from the National Task Force for Therapy Equality, compiled especially for legislators, will prove helpful.

Rewriting Dictionaries on the Fly… Will We Challenge the Prevailing Narrative?

Second, when it comes to dictionaries being “woke,” I drew attention last month to Dictionary.com’s “biggest update ever,” noting that “those who control the language control the culture.”

As I wrote, “The revisions are intended to ‘help eliminate heterosexual bias in language, and they were “informed” by the gay activist (or, gay activist driven) organizations GLAAD and the APA. No wonder LGBTQ websites like Out.com are celebrating the changes.”

Now, it appears that the prestigious Webster dictionary realized that it was not sufficiently woke, making clear that to speak of “sexual preference” with reference to “orientation” was “offensive.”

As Steve Krakauer tweeted on Tuesday, “As recently as last month, Webster’s Dictionary included a definition of ‘preference’ as ‘orientation’ or ‘sexual preference.’ TODAY they changed it and added the word ‘offensive.’ Insane – I just checked through Wayback Machine and it’s real.”

He added, “I mean this is all just complete insanity. Here’s Leon Panetta, Obama’s Defense Sec, writing in 2018 for CNN about how ‘Trump is not who we are’ since ‘we are all created equal under God, regardless of our race, creed, religion, color, sexual preference.’”

Jeremy Boering’s observation was right on: “Remember way back in today when ‘sexual preference’ became an offensive term and the left started rewriting dictionaries and disappearing the term from their own histories? Yeah, nothing Stalinesque about any of that…”

But what else can we expect from a society that now allows you to change your birth certificate based on your personal perception of your gender? Rewriting dictionaries on the fly is minor in comparison.

The discouraging news is that this will continue to happen unless we challenge the prevailing narrative. Will we?