Like a small, unnoticed fire in the basement which can destroy your home, Communism is lurking in the shadows of our nation. 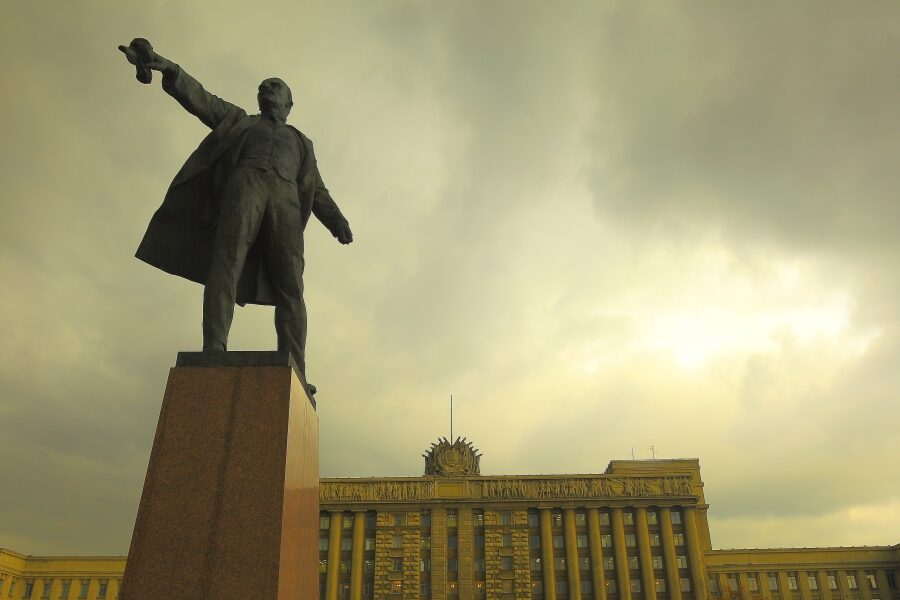 Russian House of Soviets, Lenin on Moscow Square in St. Petersburg (which the Soviets called Leningrad).

Americans don’t know enough about communism to see it when it starts here. Writing in the Tablet, Mary Mycio notes that we have “a certain herd immunity to Nazism and fascism.” But not to communism.

The Soviet Union fell a long time ago, as people’s memories go. It fell almost 30 years ago. That means that no one under 45 or 50 will have any real memory of communism as a living force in the world. They know about Cuba because it’s close to us and about weird little places like North Korea. They don’t seem to think of China as a communist country. A few people try to say this, pointing to the state’s genocidal wars on its people, like the Uygurs. But few seem to care.

“After a generation of forgetting,” Mycio writes, “we have few cultural T-cells left to recognize coercive unanimity, punitive group think, and other warning signs when they appear in the body politic.” She lived in communist Ukraine and watched the Soviet Union fall after 70 years of tyranny. She wrote a book about the Chernobyl disaster, which exemplified the Soviet system. “Americans and others across the West,” she writes, “have simply forgotten about it all, or never learned about it in the first place.”

As far as I can tell, most people who think about communism at all don’t worry about it. They worry more about other people worrying about it.

They Don’t See It

I know what she means. I’ve seen Soviet communism face to face. In a campground outside Moscow, in the summer of 1978, I and some friends huddled in our cabin with a Russian violinist. He risked losing everything he had to talk with westerners. As westerners, we were being watched.

If caught, the young man would have been sent to the gulag, where he would have suffered and could have died. If he survived, he would never get his musical career back. I told the story in Americans Romanticizing Communism.

But people who haven’t had such experiences often don’t see it. They don’t see how wicked the communist countries were. A few years ago, I found a Red Army cap for sale in a thrift store. Here was a symbol of one of the worst regimes in human history, maybe the absolutely very worst one ever. Someone had bought it and worn it. The clerk at the thrift store put it on the rack for sale. I’m sure no one gave it a second thought. It was just a hat.

Mycio explains why it matters. “Most people don’t learn history from lectures or books. They pick it up from television, movies, and entertainment. Hogan’s Heroes taught baby boomers to laugh at Nazi Germany, and a new generation learned about its horrors from Schindler’s List.”

We don’t get the same message about communism. Popular culture doesn’t give us any equivalents to Hogan’s Heroes or Schindler’s List about communist countries. “Most of the crumbs of communist memory that make it into American culture have no real connection to history. The few exceptions — such as Mr. Jones, the powerful 2019 film about the Ukrainian famine — tend to be culturally marginalized. … Compare that with the dozens or hundreds of titles like Hitler’s Circle of Evil that you often find without even looking for them.”

We have a Holocaust Museum in Washington, D.C., right on the National Mall with the Smithsonian’s great museums. A host of organizations and scholars work to keep our knowledge of the Holocaust alive, and to see how easily some Americans might begin thinking that way or even acting on their thoughts.

We don’t have a museum dedicated to remembering communism’s long brutal history. We have a memorial for victims of communism in D.C., some blocks away from the Mall. That’s something, but not the same thing. Some organizations and some scholars still talk about communism, but not that many. A lot of political activists do, but even when they’re right, they don’t have the weight of the people writing on the Holocaust. Readers can say, “Well, of course they’d say that” and click to the next article.

Why Does the Ignorance Matter?

This matters, even though many political people will want to say it doesn’t. Anti-semitism and communism are like small fires in the basement. The fire’s small enough to put out easily, without damaging the house. But you have to put it out, because while it may burn itself out, it may also spread and destroy a lot more, and maybe even burn down your home.

That doesn’t mean it’s the threat people think it is. People who cry “communism!” or “socialism!” any time the government does something they dislike discredit their cause. Christianity has a high view of the state as a guarantor of order, including the protection of public health. The American founding fathers did also, George Washington leading the way.

Lewis and Acton Knew This

C.S. Lewis knew this. Writing during World War II, he worried that the “masters’ running things wouldn’t go away when the war was over. “Those who wish for whatever reason to keep their fellow-citizens regimented longer than is necessary will certainly say they are doing so in the interests of security.” Bossy people will always have a good-sounding reason for continuing to boss people around.

So did Lord Acton, author of the famous line, “Power tends to corrupt, and absolute power corrupts absolutely.” And of a just as famous but not as well known follow-up line: “Great men are almost always bad men.”

It’s a dark view of men in power, but then God Himself through the psalmist tells us not to put our trust in princes. The psalmist says not to do that because they die and their works will pass away, but we take from the whole of Scripture a warning against trusting people in power to serve us and the common good rather than themselves.

This is, as it happens, both a conservative and a leftist insight. Disciple of Edmund Burke or of Karl Marx, you know the modern state can’t be left on its own. It cannot be trusted always to act well nor to protect the rights and freedoms of citizens. It must be watched, closely, and all the time.

David Mills is a senior editor of The Stream. After teaching writing in a seminary, he has been editor of Touchstone and the executive editor of& First Things. His previous article was They Lied About Tolkien.

My Local Newspaper Whitewashes a Communist