They Lied About Tolkien 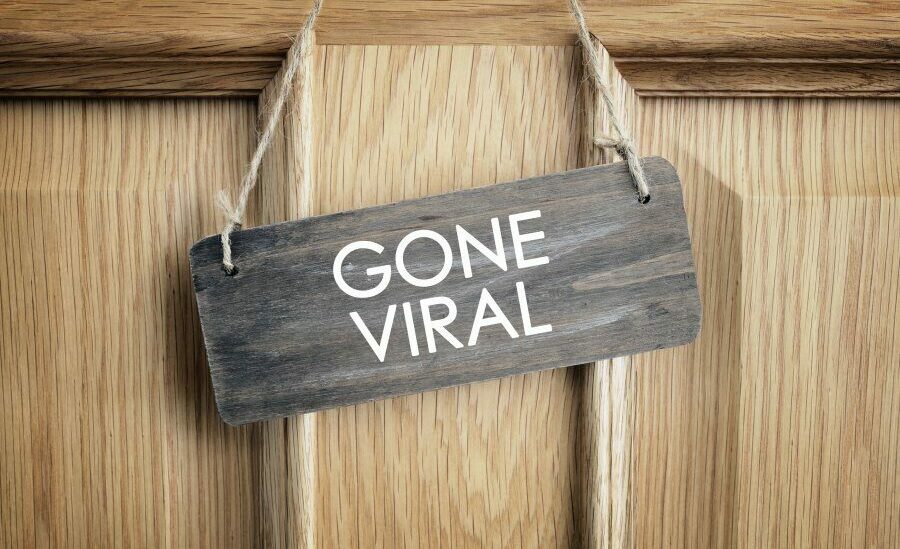 The editor rejected J.R.R. Tolkien’s draft of The Fellowship of the Ring because Tolkien had used “dwarves” instead of “dwarfs.” So said a meme that popped up a lot on my Facebook page. A pastor I know posted it with the note, “Which he did.” Very quickly 29 of his friends shared it. Who knows how many dozens or hundreds of times friends shared it on.

It makes Tolkien look like a jerk. It is also completely wrong. Ridiculously wrong. And I think dishonestly wrong.

It’s completely wrong in a way that anyone who knows anything about Tolkien should spot.

First, Tolkien’s editor would not reject a draft because he disagreed with how he spelled one word. Especially when the author is a distinguished scholar of old languages. They had a very good relation and the editor admired his writing.

For that matter, no editor in the world is going to reject a whole draft based on one misspelled word. That would be monumentally stupid. People that stupid don’t become editors at major publishing houses. 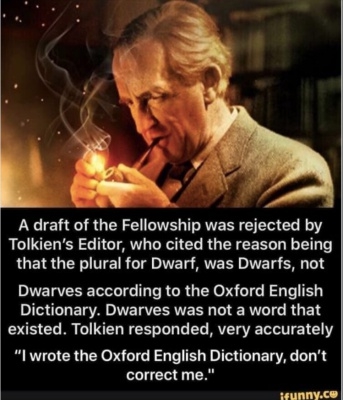 Second, Tolkien would never have said something so dumb as “I wrote it” of a vast project like the OED. Work on it had begun in 1879. (By 1884, the editors had reached the word “ant.”) The first edition finally appeared in 1928, in ten large volumes. It covered 400,000-some words.

Third, he knew his authority as a scholar and as the inventor of the world and the languages he’s describing. He invoked his authority, when he did, politely and often with an explanation.

Fourth, Tolkien would not have said to his editor that imperious, “Don’t correct me,” unless he were really peeved, and I don’t think he would even then. He could be cranky, but he wasn’t lofty and condescending.

If you knew a little more about Tolkien, you’d know a couple more things. He only worked for the OED for a year or so, from 1919 to 1920. He collected uses of words from “waggle” to “warlock.”

You’d also know that he explained why he used the spelling. A little contradictorily, as it happens. In a 1937 letter to his editor after the publication of The Hobbit, he calls his usage “a piece of private bad grammar,” but goes on to defend it. In Appendix F of The Return of the King, he wrote “I have ventured to use the form dwarves, and so remove them a little, perhaps, from the sillier tales of these latter days.”

Why Make It Up?

People seemed to love the meme. Rarely have I seen a meme pop up on my Facebook page so many times. People who should have known it was false dropped their guard. Like my friend the pastor, who not only believed it but pushed it (“Which he did.”).

Why would someone make up a meme this obviously false? Why would so many people who should have known it was a crude fake believe it? And share it? For the usual reasons we believe untruths, I think: We want to believe them because they make us feel good about ourselves, and let us look down on others.

“This kind of meme flatters the reader,” my friend Christopher Chapman observed. It pulls us “into the imaginary inner circle of those who have positions of authority but just ‘don’t get it.’ Ha, ha, that stupid editor I now feel superior to!”

Chris gave a second and worse reason. Attributing such a mean spirit to Tolkien “allows me to pawn off my mean spirit on him — as if it would be a great character trait to possess — so that we are now cronies, the great Tolkien and myself telling off the fools of the world.”

It’s too easy to lie through memes. We can be self-servingly gullible. We like words — especially short and punchy ones like memes — that tell us what we want to hear. So we drop our guard and pass on the meme because we want it to be true. Sometimes for good reasons, but sometimes for very bad reasons.

God tells us in the Eighth Commandment, “Do not lie.” That includes trying very hard to tell the truth. It means being very careful not to say anything untrue. Or to pass on anything untrue. The negative commandment requires positive action.

We too often forget this. I can’t count the number of times I’ve shared a meme or a news story because it said what I really wanted to be true, when it wasn’t. When you share a meme, it becomes your meme. You’ve put your word behind it. If it’s not true, and you could have known it was untrue if you tried to find out, it’s a lie. It’s your lie.

David Mills is a senior editor of The Stream. After teaching writing in a seminary, he has been editor of Touchstone and the executive editor of First Things. His previous article was They Even Called Themselves ‘Cuomosexuals.’ Liberals Find an Excuse for Loving a Thug.