Now That the Left Has Rewritten Ruth Bader Ginsburg, What’s Next? 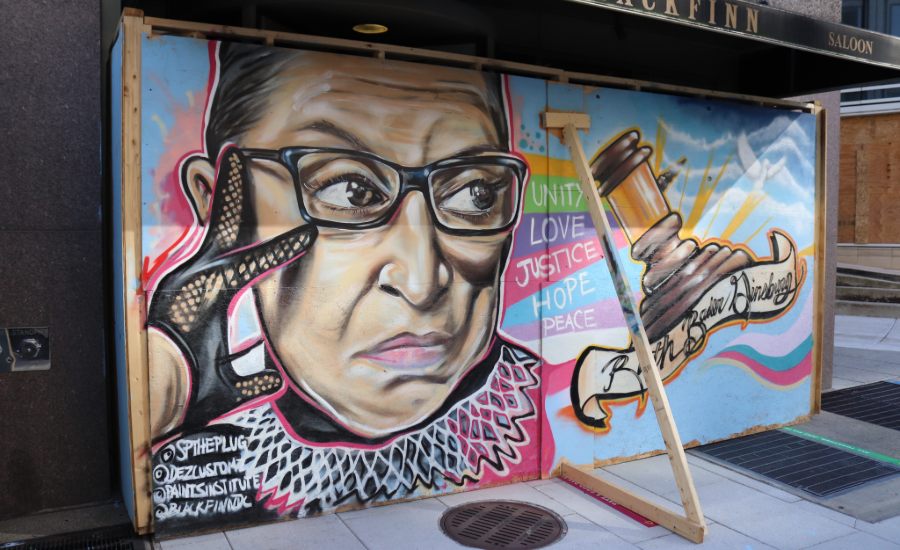 When the words of the iconic Ruth Bader Ginsburg have to be rewritten to satisfy the latest cultural craze, you know you are in deep trouble. The only question is, what’s coming next? I have an idea. In fact, I’ll give you a sample. But first, let’s look at the recent rewriting of an important Ginsburg quote.

Last year, to honor Ginsburg’s memory soon after her death, the ACLU posted this quote: “The decision whether or not to bear a child is central to a woman’s life, to her well-being and dignity. … When government controls that decision for her, she is being treated as less than a fully adult human responsible for her own choices.”

This year, to honor the one-year anniversary of her passing, the ACLU reposted the quote, but with revisions: “The decision whether or not to bear a child is central to a [person’s] life, to [their] well-being and dignity. … When government controls that decision for [people], [they are] being treated as less than a fully adult human responsible for [their] own choices.”

This is About Women, Not Just “People”

And so, rather than offend biological women who identify as men — and, theoretically, who can still get pregnant and have abortions, as long as they haven’t had full-scale sex-change surgery — all references to women must be removed. Plus, the constant references to “women” and “she” and “her” sound antiquated and sexist. How did RGB miss it?

But that’s the whole point she was making. This is about women, not about people. About “she” and “her,” not about “them.”

As one Twitter follower noted, “ACLU misquotes RGB and changes her meaning. She did not say or mean ‘person’ or say or mean ‘their’. She said and mean[t] woman and her. The use of brackets in fact changes the quote to a statement RGB never made.” (Mind you, this was the ACLU posting this dribble, not some marginal, non-influential, fringe player.)

It would seem, then, that in the end, even the very concepts of femininity and feminism and womanhood and even “female” must go.

But in these days of cultural madness, authors as prominent as J. K. Rowling get eviscerated for daring to state that women, not people, menstruate. And leftist leaders like Alexandria Ocasio-Cortez make utterly absurd statements like this: “The gutting of Roe v Wade imperils every menstruating person in the US, every person who engages in sex, and every person who values our constitutional right to privacy. Just one reason,” she continued, “Roe isn’t a ‘women’s issue’ beyond the fact that people who aren’t women can menstruate too!” Oh, the science! (To be totally honest, when I first saw this quote a few days back, I thought it was a joke. Seriously?)

Where, then, will this lead us?

Men Can Be Feminine, but They Can’t Be Women

I have previously pointed out that, “Radical feminists have raised their voices to protest the idea that a biological male who identifies as a woman is now legitimately female, devoting an entire book to the subject. The book is titled Female Erasure, with a foreword by feminist icon Germaine Greer.

She wrote, “Men who adopt femininity may believe that they are achieving femaleness, but femaleness is a tougher destiny than they can know or guess. Femaleness is demanding and painful, whether at menarche, menstruation, childbed or menopause, and born women have no choice but to deal with it. . … Femininity is a de-sexed masquerade. Men can be as good at it and better than women, but that does not make them women.”

It would seem, then, that in the end, even the very concepts of femininity and feminism and womanhood and even “female” must go. Perhaps some of the tributes to RBG will have to be rewritten as well?

How about we give it a shot?

Let’s Rewrite This to be Gender Neutral Too

On September 19, 2020, Yasmin Omar penned a tribute to Ginsburg titled, “Why Ruth Bader Ginsburg Is Our Feminist Hero.”

But how does that make transgender females (meaning, biological men who identify as women) feel? Isn’t the very concept of feminism a threat, if not somewhat judgmental, falling into the old gender binary? Why can’t someone be a masculine female? Or a feminine male?

I propose a more neutral term, one that is still open to leftist leanings, thus, “Why Ruth Bader Ginsburg Is Our Humanist Hero.” What a delightful improvement!

We’ll make that change in the article too: “With all the trails she has blazed, Ruth Bader Ginsburg certainly lives up to her name as a flaming feminist [humanist].”

Or, better still, “With all the trails [they have] blazed, Ruth Bader Ginsburg certainly lives up to [their] name as a flaming [humanist].” That is much better.

Let’s fix up these sentences too: “Ginsburg’s inspiring work on the bench – speaking up for women, minorities and the LGBTQ community – has made her a pop-culture sensation.”

This becomes, “Ginsburg’s inspiring work on the bench – speaking up for [people], minorities and the LGBTQ community – has made [them] a pop-culture sensation.” (On second thought, perhaps Ginsburg would have preferred a different pronoun, such as “zer.” We’ll have to do some research on that.)

Those [Humanists] Took the Place of [Humans]!

And this: “What I admire about Justice Ginsburg is how she courageously stands her ground in the face of sexism, battling aggressions both micro and macro. When studying at Harvard Law School in 1957, she was one of just nine female undergraduates in a year group of 500 men, and suffered countless indignities. The women were refused access to the library (the same fate that befell Virginia Woolf at Cambridge decades earlier); they were not called upon in class; and were asked by the dean to explain, one by one, why they had enrolled at the university and taken a place from a man.”

It now becomes: “What I admire about Justice Ginsburg is how [they] courageously [stand their] ground in the face of sexism, battling aggressions both micro and macro. When studying at Harvard Law School in 1957, [they were] one of just nine [human] undergraduates in a year group of 500 [people], and suffered countless indignities. The [people] were refused access to the library (the same fate that befell Virginia Woolf at Cambridge decades earlier); they were not called upon in class; and were asked by the dean to explain, one by one, why they had enrolled at the university and taken a place from a [person].” That makes thing so much clearer!

We Must Push Back Against the Dehumanizing Neutering of Society

And with that, RBG, the great humanist icon, the defender of the rights of people, has been effectively neutered.

I say we don’t wait around and find out. Instead, let’s push back with sanity and truth (and love for those who struggle with gender identity confusion). It’s doubtful we could survive a further descent into cultural madness.

Rosh HaShanah and the Passing of Ruth Bader Ginsburg