By Rachel Alexander Published on October 7, 2015 •

The Stream has uncovered alarming information about Planned Parenthood after submitting a Freedom Of Information Act (FOIA) request to the U.S. Department of Health and Human Services (HHS). The request was spurred by a series of undercover videos suggesting that Planned Parenthood may be involved in illegal activity in the aborted fetal body parts aftermarket.

Under the NIH Revitalization Act of 1993, the U.S. Department of Health and Human Services (HHS) should be performing audits on Planned Parenthood, since Planned Parenthood is involved in research on aborted fetuses and HHS is supporting its work with funding. Specifically, according to HHS’s own documents, “Section 498A of the Public Health Service Act [42 USC 289g-1] requires the annual submission to Congress of a report describing research involving therapeutic transplantation of human fetal tissue supported or conducted by the NIH.” In the fourth undercover video released by the Center for Medical Progress, Dr. Savita Ginde, a Planned Parenthood abortion doctor in Colorado, revealed that the organization’s fetal harvesting is categorized as research, explaining, “Putting it under the research gives us a little bit of a, a little sort of an overhang over the whole thing.”

Additionally, one of the redacted emails from HHS contained a Planned Parenthood consent form that women were given to sign in order to donate their aborted fetus to research.

Despite the terms of Section 498A of the Public Health Service Act, the audits are apparently not taking place.

The Stream filed its FOIA request with the Office for Human Research Protections (OHRP) of HHS in July, asking for documents and emails related to Planned Parenthood and the audits. OHRP is in charge of overseeing any research done on human fetuses. HHS initially responded partially on August 24, the deadline, saying they had no documents fitting the description of the public records that The Stream had requested. HHS did say that it would provide the requested emails after redacting them (more on those below).

Ultimately, the only documents turned over were the redacted emails and several letters from HHS to Congress stating that the National Institute of Health (another part of HHS) had no required reports to give Congress about research on transplanting human fetal tissue for therapeutic purposes because NIH hadn’t been involved with any such work. The letter stated that fiscal year 2007 was the last year HHS provided funding for that type of research. After that, “The NIH did not provide any financial support for human fetal tissue transplantation research.”

If this is accurate, what about all the harvesting of fetal body parts that Planned Parenthood itself categorizes as research? HHS provides Planned Parenthood with the majority of its federal funding, and has continued to do so up to the present.

HHS released 190 pages of emails to The Stream, but these were heavily redacted. Most of the emails appear to be internal discussions about how to respond to reporters’ questions about Planned Parenthood selling fetal tissue and responses to reporters — essentially coordinated talking points for damage control within various divisions of HHS and even within the FDA. Questions where the answers were redacted include, “Does the NIH believe doctors violated federal law by performing procedures in a way that preserved specific body parts?” and “Does the NIH believe the NIH or funded researchers violated federal law by their involvement with Planned Parenthood or StemExpress?”

In a few of the email responses that were not redacted, HHS confirmed that its NIH division is funding fetal research. Reporters had asked for confirmation of Senator Ted Cruz’s estimate that NIH funded $76 million in 2014 to study the therapeutic use of fetal tissue, and whether HHS would comply with his requests for information. A frantic stream of emails ensued within HHS, and an HHS employee responded stating that fetal stem cell research was mostly separate from embryonic stem cell research, costing $76 million versus $166 million for embryonic research.

Questions were also asked about the undercover videos and whether organizations other than Planned Parenthood harvest fetal tissue.

A handful of the reporters wrote stories about the information they got back from HHS. CNN’s Carina Storrs wrote, “One of the Health and Human Services requirements for using fetal tissue is that no other experimental settings, such as other cell types or lab mice, would be appropriate.” Is this the case, and if so, isn’t it another reason HHS should be monitoring Planned Parenthood and reporting on its activity in the fetal tissue aftermarket?

Writing for Reuters, Letitia Stein interviewed Arthur Caplan, director of medical ethics at NYU Langone Medical Center’s Department of Population Health, about fetal tissue research. He said Planned Parenthood might be better off staying out of the area. “The need for tissue is not great,” he told her, explaining, “It’s too controversial.” 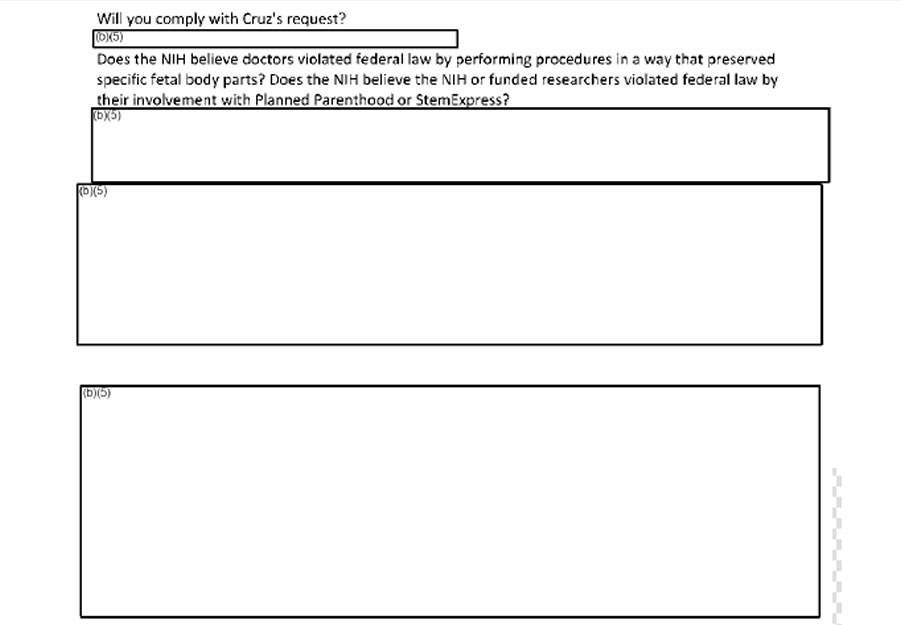 We asked Steve Aden, Senior Counsel for Alliance Defending Freedom, about the HHS response to our FOIA requests. “The FOIA Statute wasn’t intended to empower the government to stonewall the public,” he responded. “Using FOIA as a shield to keep its own deliberations on how to ‘spin’ its decisions to the public secret is a flagrant violation to the letter and spirit of the law.”

The Stream will be appealing all of the email redactions. There are nine disclosure exemptions applicable to FOIA requests, and HHS claimed the (b)(5) exemption applied, “inter-agency or intra-agency memorandums or letters which would not be available by law to a party other than an agency in litigation with the agency.”

But is this a justifiable reason or just an excuse to throw up a smokescreen? According to Department of Justice guidelines, emails that are sent to reporters in response to FOIAs are no longer considered privileged. The guidelines say that the courts have found “repeatedly that preferential treatment ‘waives any otherwise applicable FOIA exemption since ‘FOIA does not permit selective disclosure of information only to certain parties.'”

Even if HHS believes one of these exemptions applies, it will be up to a court or trier of fact to make that determination. The Stream will continue to press the matter with the assistance of the FOIA Resource Center, and continue investigating why HHS apparently has not been performing the audits of Planned Parenthood’s “therapeutic research” authorized under the Public Health Service Act. The House continues its investigation this week, as a bill is being considered today that would establish a special committee to investigate the activity.