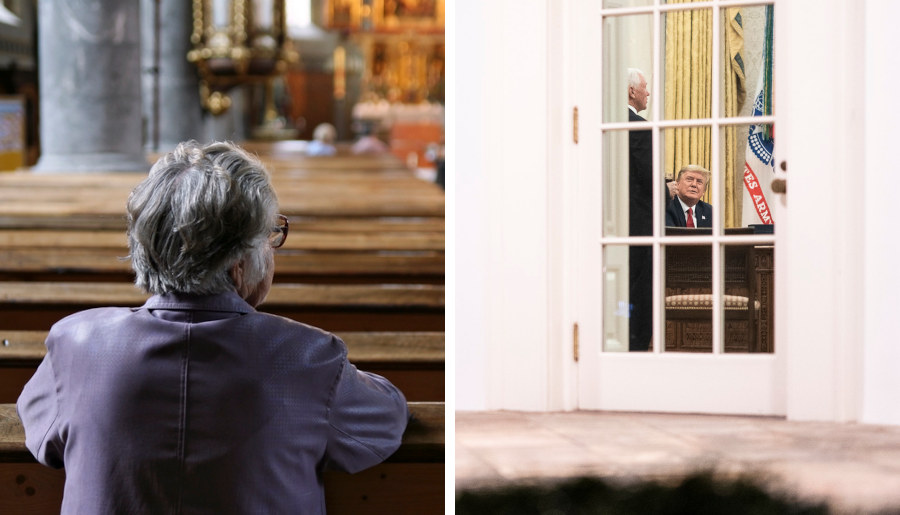 As things are ending very badly for Donald Trump’s presidency and some of his close associates are abandoning him, the question for Christian conservatives is this: Did we sell our souls by voting for Trump? Did we make a deal with the devil that was bound to end in failure and disgrace?

Someone asked me on Twitter shortly after the storming of the Capitol, “If you knew how things would end, would you have voted for Trump?”

That, of course, is an intriguing question. But it is, ultimately, unfair and unhelpful.

We’re Now in a Mess

We can only make decisions based on what we presently know. This includes being able to make projections and predictions as well, but we cannot do that perfectly.

When it came to voting for Trump, many of us knew we were walking on treacherous ground. He could do a lot of good, and he could do a lot of bad. Would the former outweigh the latter? Or in the end, would he do more harm than good?

We became better known as “the Trump people” than as “the Jesus people.”

And what of our witness and our integrity? What would be the lasting effects of our association with Trump? Perhaps we would see some policy advances, but at what cost?

Those were the questions many of us wrestled with, and that’s one reason I opposed Trump during the 2016 Republican primaries, as did many of you. We thought there were much better choices. (As for those who chose Trump over the other Republican candidates, that’s another discussion entirely.)

One Reason We Voted for Trump: To Fight the Left

But when it came to Trump vs. Hillary (or, more recently, Trump vs. Biden), we felt conscience-bound to vote against the left. We knew there were inherent dangers in our vote, given the type of person Trump was. But he got our vote nonetheless. The alternatives were simply too scary to consider.

And right now, as we watch “the Purge” taking place, with the wholesale banning of conservative voices and platforms by Big Tech, we remember one reason we voted for a political outsider and fighter like Trump. Take him out of the picture now, and we face some very precarious times.

On the flip side, had Trump responded differently to his loss to Biden (be it by fraud or not) and not been accused of undermined the Republican party in Georgia, we would likely be looking at a GOP majority of 52-48 in the Senate, thereby holding back the radicality of the left.

So, on the one hand, Trump won some short-term victories and also appointed many lifetime judges. He did much good on the national and international scene. On the other hand, we are now left with a real, national mess, with the balance of power shifting dramatically left, and with the country as a whole vulgarized in many ways by the Trump presidency.

What About Our Christian Witness?

But what of our Christian witness? Did we sell our souls by voting for Trump?

To this moment, I believe we can justify why we voted for him in the general elections and do so without shame, especially given the choices. (For the record, though, I have always respected those who could not vote for either candidate out of conscience before God. I differ strongly with those who voted Democrat rather than vote for Trump.)

Like some of you, as a Trump voter, I often expressed my concerns about the president, sounding many warnings along the way. (See, for example, this article from June 30, 2017 titled, “Don’t Sell Your Soul Defending the Words of President Trump.”)

Like some of you, I cringed over many of his tweets and saw the real danger of his reckless words (after all, this was the most powerful man on the planet demeaning and degrading others in the sight of tens of millions).

Like some of you, I saw real truth in the damning criticisms that were brought against Trump, all while recognizing how he was unfairly savaged by the leftwing media.

The Choice was Clear for Us

Yet, to repeat, when it came to voting for him or Hillary or Biden, the choice was clear for us.

We had absolutely nothing in common with the white supremacists and other fanatics who stormed the Capitol last week. We were not xenophobes or racists or misogynists. But we were staunchly opposed to where the radical left might take us, hence our vote for a very flawed man.

What can all of us do to see His name lifted up again?

Many of us also hoped that some of the godly leaders who surrounded him would be able to help him make some deep, fundamental changes as they spoke into his life with clarity and truth. And so we cast our vote.

Did we sell our souls in doing so? Did we compromise our values in the process?

For many of us, the answer is no, and we don’t need to go on an apology tour for our vote. Even if some of our friends were more prescient than we were, seeing that things would end badly, we acted with sincerity before God and man. And if in the years ahead, our worst fears are realized and our country lurches even further to the far left, we will remember why we voted as we did.

Many of Us Did Compromise Our Values

That being said, many of us did sell our souls and compromise our values. There is no doubt about it whatsoever.

We diminished the importance of a leader’s character and integrity. We became apologists for the president’s sins and shortcomings. We mirrored his worst characteristics. We justified the unjustifiable. We put our trust in a man to fight our political and cultural battles. We became better known as “the Trump people” than as “the Jesus people.” The list goes on and on.

To the extent that applies to any of us, we need to do some serious, private soul-searching along with some honest, public repenting, not in reaction to the attacks from the left but out of reverence before God.

Either way we voted, however, the reputation of Jesus has been trashed before the nation. What can all of us do to see His name lifted up again?