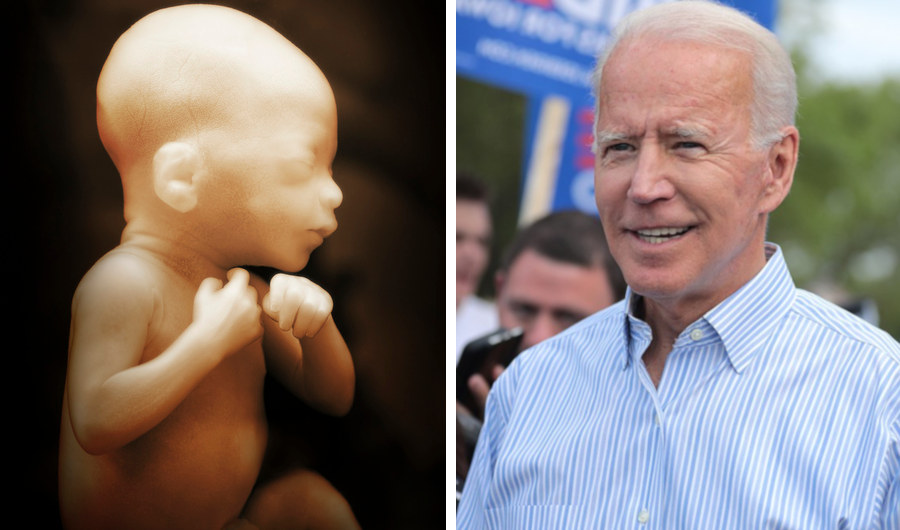 In a period of less than 10 minutes on Monday, I read an article about candidate Joe Biden’s extreme pro-abortion views and then was sent a link to the home page for “Pro-Life Evangelicals for Biden.”

The article cited Biden’s response to a question about abortion rights, where he addressed the potential of Amy Coney Barrett becoming a Supreme Court justice. Should that be the case, he said, and should the court overturn Roe v. Wade, “the only thing, the only responsible response to that would be to pass legislation making Roe the law of the land. That’s what I would do.”

This is in harmony with the Democratic platform, which plainly states, “We will repeal the Hyde Amendment, and protect and codify Roe v. Wade.”

In that light, how can you identify as a “pro-life” evangelical who supports Biden? Wouldn’t that be like declaring yourself a pro-abolition supporter of George B. McClellan, the Democratic candidate who ran against Abraham Lincoln in 1864? Or like declaring yourself an anti-segregation supporter of George Wallace? How can you identify as “pro-life” and yet actively campaign for the party of abortion?

How can you identify as “pro-life” and yet actively campaign for the party of abortion?

In other words, while we think the slaughter of tens of millions of innocent babies is a bad thing, we’re willing to sacrifice their lives before they enter the world by voting Democrat, since we prefer the Democratic Party’s other policies. Seriously?

How much different is this than saying, “While we have a problem with Pol Pot’s genocidal policies, we do think his other reforms serve in the best interest of the country, and so he gets our vote.”

To be clear, I am not comparing Joe Biden to Pol Pot (please repeat that 10 times slowly, since I am not making that comparison). But I am comparing the slaughter of the unborn to other mass moral atrocities, and for good reason. Thus, I find any evangelical justification of a vote for an aggressively pro-abortion candidate and party to be unethical. (Yes, this is my personal opinion. Each of us will give account to God, and He is the ultimate judge.)

How, then, do these evangelical leaders justify their position? They state, “Many things that good political decisions could change destroy persons created in the image of God and violate the sanctity of human life. Poverty kills millions every year. So does lack of healthcare and smoking (if you are trying to quit smoking, you can check here). Racism kills. Unless we quickly make major changes, devastating climate change will kill tens of millions. Poverty, lack of accessible health care services, smoking, racism and climate change are all pro-life issues.”

And this is the justification for voting for a pro-abortion candidate? A candidate who wants to be sure that Roe v. Wade is the law of the land? A candidate who, during the campaign, reversed his longstanding support of the Hyde Amendment?

I agree that poverty kills, but Trump’s economic policies have helped alleviate poverty, not accelerate poverty.

As for lack of healthcare, both parties want good healthcare for all Americans but simply differ on the best way to achieve that.

As for racism killing people, perhaps what kills people is the stoking of racism, especially by the left? As for Americans literally killed because of racism every year, as tragic as even one such death would be, that number pails in comparison to the 700,000 (!) babies killed in their mother’s wombs every year. (In years past, that number has been twice as high.)

As for climate change and what should be done about that, there is intense scientific debate about the subject.

Yet, for these very reasons, we are being told not to vote for the strongest pro-life president we have ever had and rather to vote for the most radical, pro-abortion ticket in our nation’s history.

Do You Really Think a Vote for Democrats Will Help Save Babies’ Lives?

These pro-Biden evangelicals claim that “the most common reason women give for abortion is the financial difficulty of another child,” and so “we appreciate a number of Democratic proposals that would significantly alleviate that financial burden: accessible health services for all citizens, affordable childcare, a minimum wage that lifts workers out of poverty.”

Oh yes, if we vote Democrat, they will help these poor women out of their poverty, and thus abortions will be reduced.

In all honesty, I ask: Can you really say those words with a straight face in the presence of a holy God? Are you not perhaps driven more by deep opposition to Trump (as expressed quite forthrightly in other writings by some of this movement’s leaders) than by the hope that a vote for Democrats will help save babies’ lives?

The statement concludes with, “For these reasons, we believe that on balance, Joe Biden’s policies are more consistent with the biblically shaped ethic of life than those of Donald Trump. Therefore, even as we continue to urge different policies on abortion, we urge evangelicals to elect Joe Biden as president.”

Tell that to the more than 60 million babies slaughtered since 1973. Tell that to the babies viciously terminated in the third-trimester, some of them with their brains sucked out while still alive.

And tell that to Brenda Pratt Shafer, a registered nurse from Dayton, Ohio, who testified before the Senate Judiciary Committee on November 17, 1995, about what she witnessed when assisting a doctor abort a baby boy in his 26th week.

She stated that the baby was alive and moving as the abortionist “delivered the baby’s body and arms — everything but the head. The doctor kept the baby’s head just inside the uterus. The baby’s little fingers were clasping and unclasping, his feet were kicking. Then the doctor stuck the scissors through the back of his head, and the baby’s arms jerked out in a flinch, a startle reaction, like a baby does when he thinks he might fall. The doctor opened up the scissors, stuck a high-powered suction tube into the opening and sucked the baby’s brains out. Now the baby was completely limp.”

These “pro-life” evangelicals are voting for the party that has supported these barbaric procedures for years. Indeed, they are calling on other Christians to vote for the party that opposes the Born-Alive Abortion Survivors Protection Act, which would guarantee medical care for a baby that survives abortion.

In fact, as senator, Vice Presidential candidate Kamala Harris voted against this very Act, and “earlier this year she voted against the Pain-Capable Unborn Child Act, which would have protected unborn babies from abortion procedures after the point at which they can feel pain (20 weeks).”

Yet these enlightened evangelicals state they “oppose ‘one issue’ political thinking because it lacks biblical balance.”

With all respect, I say this: Do not talk to me about “biblical balance” while urging evangelical followers of Jesus to vote for the party that justifies the slaughter of more than 60 million babies in their mother’s womb and will fight tooth and nail to codify Roe v. Wade.