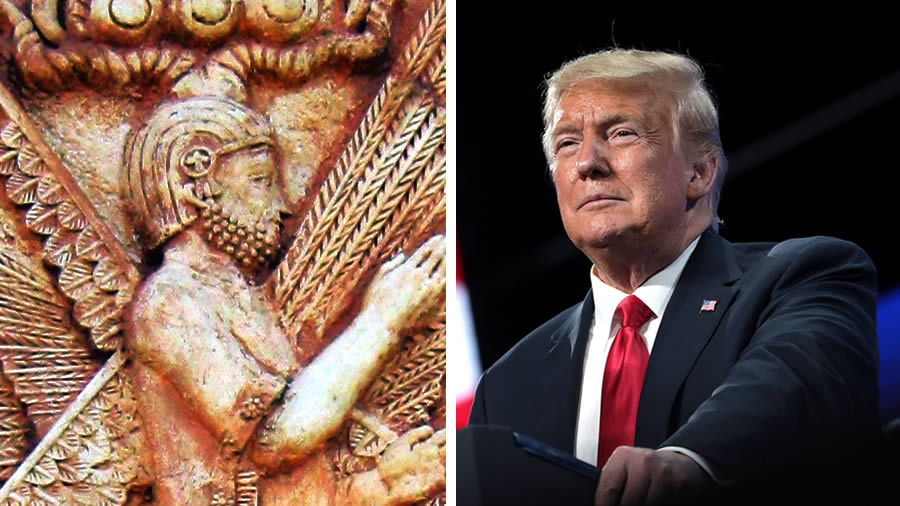 As if the person and presidency of Donald J. Trump have not been controversial enough, there is an unusual twist that adds to the controversy. I’m speaking of the idea that the presidency of Trump can be likened to a biblical prophecy, namely that of the Persian king named Cyrus. What are we to make of this seemingly farfetched idea? And have you ever read a quote from King Cyrus himself? (If not, stay tuned. You’re about to.)

This week, in conjunction with the release of my new book, Evangelicals at the Crossroads: Will We Pass the Trump Test?, I’ve been focusing on a number of major issues of special importance to evangelical Christians, especially as we approach the November elections.

In my last article, I asked whether Trump could be reelected without divine intervention, as many have alleged divine intervention in his 2016 election. That’s also why I devoted a chapter in my book to the question, “Did God Uniquely Raise Up President Trump?”

Specifically, some time before the 2016 elections, there were Christian leaders who felt that God showed them that, just as He had raised up Cyrus, an idol-worshiping, foreign king, to restore and rebuild Jerusalem, so he would raise up Donald Trump. Not only so, but in the book of Isaiah, the Lord called Cyrus His anointed one (Hebrew, mashiach).

Does that mean that Trump is anointed by God? Does that make him some kind of savior figure?

Look at this Parallel

Not surprisingly, these claims were widely mocked, especially before Trump’s election.

But to say that is to miss the whole point of the Cyrus connection, which was meant as a parallel rather than a direct prophecy.

In other words, these Christian leaders were not saying, “The Bible contains a prophecy about Donald Trump! Trump is in the Bible!” (If that’s how you took it, I strongly encourage you to read the Scriptures more carefully.)

Instead they were saying, “Look at this parallel. God used King Cyrus, an unlikely vessel who didn’t even know who Yahweh really was, to bless His people Israel. We believe God is going to use Trump to do good things for God’s people too, even though there’s no evidence he has a personal relationship with the Lord.”

Sixty years earlier, during the founding of the modern state of Israel, Harry Truman realized the significance of America’s standing with the Jewish nation, seeing himself as a Cyrus-type figure. (For a fascinating book-length study, see here. Israeli Prime Minister Netanyahu actually compared both Truman and Trump to Cyrus.)

And, ironically, just as Cyrus was commissioned to restore and rebuild Jerusalem (Isaiah 44:24-26), so Trump was the president who moved our embassy to Jerusalem.

God Raised Up Cyrus, Though Cyrus Did Not Know God

But, to understand the Cyrus prophecy, it’s important to hear from Cyrus himself. His words have been preserved in what is called the Cyrus Cylinder, discovered in 1879 and written in 539 BC. (For more details and further quotes, see my book.)

This is what the Lord had said about Cyrus in Isaiah: “For the sake of Jacob my servant, of Israel my chosen, I summon you by name and bestow on you a title of honor, though you do not acknowledge [or, know] me.” (Isaiah 45:4)

What did Cyrus say of himself?

It sounds like Cyrus was a bit full of himself. There is no king on earth like me! (In reality, at that time, it was true.)

And to whom does Cyrus give credit for raising him up? To Marduk! “[Marduk] searched everywhere and then he took a righteous king, his favorite, by the hand, he called out his name: Cyrus, king of Anshan; he pronounced his name to be king all over the world.”

Isn’t this remarkable? The prophecy in Isaiah uses similar wording, except there it is Yahweh who called and raised up Cyrus. Here, credit is given to Marduk!

But, in keeping with the policy of Cyrus, rather than subjugate the exiled peoples, as a foreign king would normally do, he restored them to their homelands and even funded the rebuilding of their temples. This way, he could rule over them more peacefully, extract taxes and revenues, and keep his trade routes open without continual warfare.

And so, when it was time to release the Jewish exiles, Cyrus wrote this (as recorded in the Bible): “This is what Cyrus king of Persia says: ‘The Lord, the God of heaven, has given me all the kingdoms of the earth and he has appointed me to build a temple for him at Jerusalem in Judah. Any of his people among you may go up, and may the Lord their God be with them.’” (2 Chronicles 36:23)

So, when it came time to speak to Israel, he talked like a true believer (presumably with the help of one of the Jewish exiles), giving credit to “Yahweh, the God of heaven.” But when he wrote for the Babylonians, he gave credit to their chief god, Marduk, ascribing might and power to him.

This is part of the Cyrus prophecy that very few Christians know about today, leading to confusion when they hear that God raised up Trump just as He raised up Cyrus. And things get even more confusing when some Christians give the impression that Trump is so anointed that even his Twitter account is anointed by God. Certainly not!

Can you see it more clearly now? And, in many ways, hasn’t the comparison proven true?