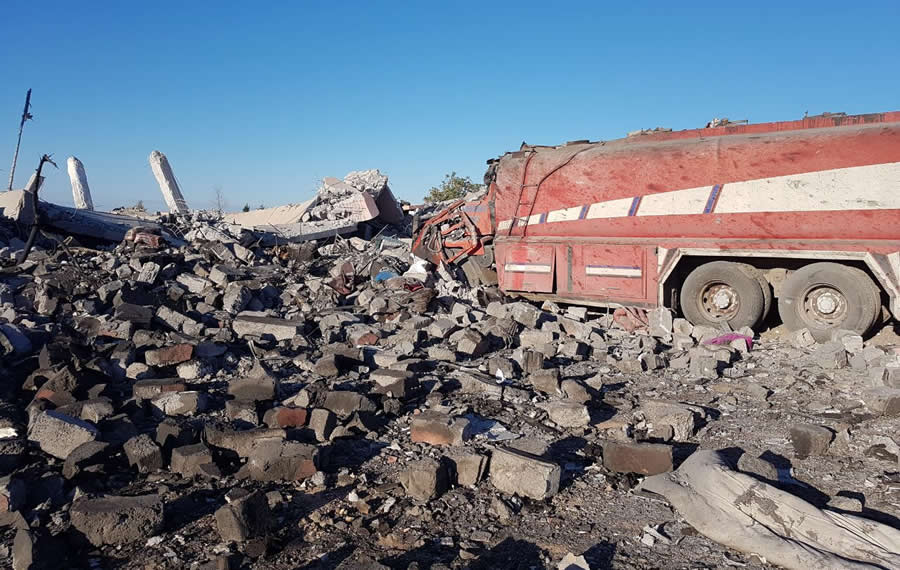 The aftermath of Turkish jet attacks on Syrian Christians and Yazidis.

The United States and Turkey have signed an agreement over Syria. Both parties agree on the importance and functionality of the “safe zone.” The agreement calls for dismantling Kurdish positions. “In order to address the national security concerns of Turkey to include the re-collection of the YPG heavy weapons and the disablement of their fortifications and all other fighting positions.”

The Turks stated that they would suspend the combat operations for 120 hours. But no one specified when the cease-fire would begin. According to reports, Turkish bombings have continued.

The White House has called this agreement a “victory for civilization.” As someone who fights for the Assyrians in Iraq and elsewhere … . I am unable to rejoice just yet. Those who do not learn from history tend to repeat it. This agreement, on paper, may sound promising. It might bring order to Northeast Syria. However, let us not forget that in Erdogan we are dealing with a leader whose aim is to “Turkify” and Islamify this very diverse part of Syria. To replace its native residents with hundreds of thousands of refugees now in Turkey.

The situation in Syria is devilishly complex. Essentially, the following are the groups on the ground who are components in this war.

President Trump has decided that this complex region isn’t worth the United States trying to manage. The reins have been given to the forces on the ground, and their outside sponsors (Turkey, Iran, Russia).

I’m guardedly optimistic that President Trump’s withdrawal and this agreement might result in stability. And that this will not be a green light for Islamist ethnic cleansing.

The Syrian Democratic Forces, however, see this as their forced surrender. They have announced that they won’t abandon their positions to Turkey. They will simply cease fighting over the small areas Turkey has already conquered. But they will hold the rest of the land they have come to possess. They count on help from the legal government of Syria and its Russian allies. That would mean folding the SDF into the regular Syrian Arab Army, and granting the region Russian air protection.

Turkey doesn’t want to have dogfights with Russian planes. Or to face the heavy equipment Assad’s army commands.Therefore, its land-grab in Syria will prove limited. Its plans to expel Kurds will probably fail.

The Turks Have Angered the World

Turkish President Erdogan has alienated world opinion by his actions and threats. (For instance, he warned he might shove 3.6 million Syrian migrants into Europe.) He can’t count on NATO support if war flares up with Russia. Erdogan has asked Russia’s Vladimir Putin for a face to face summit. I don’t expect Putin to cave to Erdogan’s demands for a chunk of Syrian territory.

Although there has been an agreement reached by the U.S. and Turkey, the fighting on the ground continues. So I think the U.S. Congress should move ahead with its sanctions bill targeting Turkey. President Trump should sign it. Aggressors should pay a price when they create 100,000 refugees with wanton attacks on neighboring countries.

U.S. Influence Out, Russian In

I have followed the abusive and aggressive actions of Kurdish nationalists in Iraq and Syria toward Assyrians, Chaldeans and Syriacs. So I don’t consider the Kurds a long-term safe option for Syrian Christians either. The legal government of Syria must regain some control of that region. It must include Syrian Christians and the Kurdish Sunni Muslims in negotiation and political talks. Othewise keeping the peace won’t be worthwhile for them.

We must pray for something better. For a new Syria where all (particularly persecuted Christians) can exercise their rights as citizens. For a Syrian state whose function it is to protect those rights. They must include free speech and religious liberty. That is is a more democratic and realistic goal than what Kurds or Islamist fighters have sought. I hope that peace prevails now. I hope the Syrian government allows enough decentralization of power to make its regime more acceptable to all its citizens.