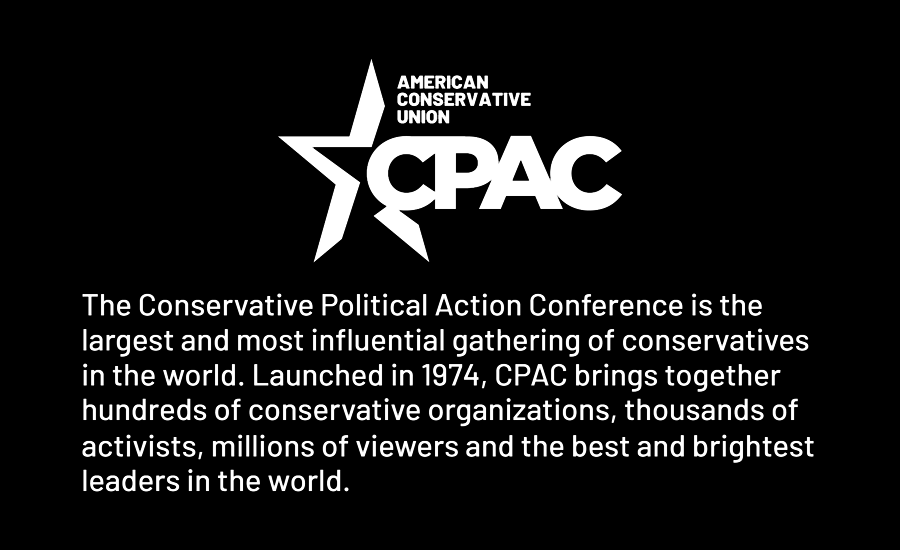 It’s the foremost gathering of conservative activists. Everyone goes to CPAC. More than anything else, it defines what American conservatism is on the ground. Its website boasts “We define conservatism.” And it’s the conservatism the political world pays attention to: “CPAC is the third ranked Political and Press event of the year, behind the State of the Union and the White House Correspondents’ Dinner, showcasing CPAC’s ability to be at the center of the news media for four consecutive days.”

Matt Schlapp is the head of CPAC. He’s also Catholic. And here is his tweet. 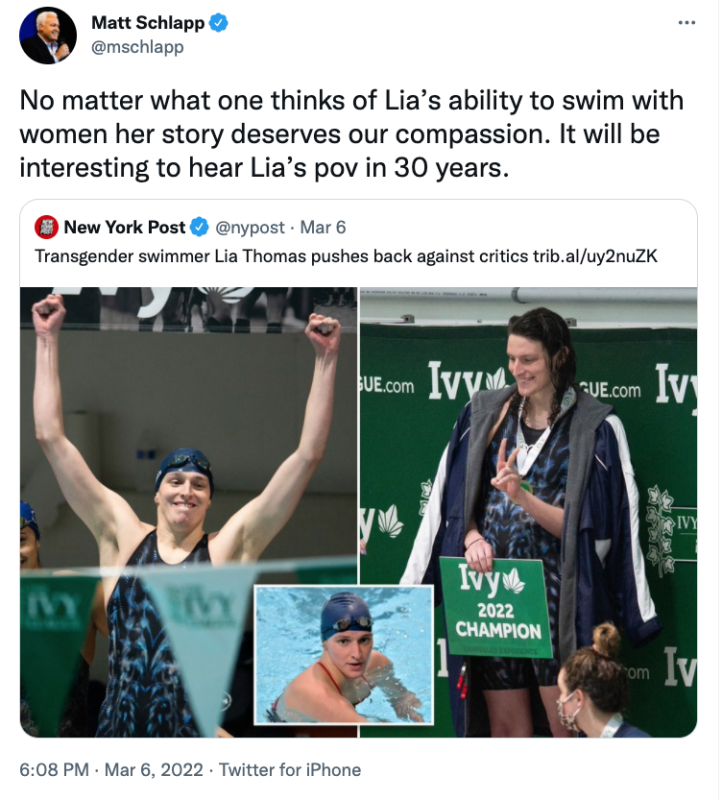 Note his use of the word “her.” Of course we should feel compassion for people like “Lia” Thomas, a young man who feels he’s a woman. But “Lia” Thomas is a he, not a her.

The writer Matthew Walther explains cultural conservatism. They have “vague objections to so-called ‘cancel culture’ or critical race theory, [and] strong feelings about Dr. Seuss’s contributions to American literature and Colin Kaepernick and the integrity of women’s sports.” They either don’t care about or approve same-sex marriage, pornography, embryonic stem-cell research, and legalizing marijuana.

Schlapp is clearly the latter, not the former. See this Twitter string as well, with Schlapp explaining why he chose not to include pro-life sessions this year. He’s not all the way on board, of course, but when he tweets a “compassionate” message calling a young man “her,” he’s signaled which kind of conservative he is. It behooves social conservatives to call this out whenever we see it. As some have.

The weird thing is, all of CPAC wasn’t like that. Though the pro-gay Log Cabin Republicans had a booth in CPAC’s exhibit hall, they struck me as isolated. The speakers talked a lot about fighting the trans agenda in the schools and in sports. The American Principles Project and Moms for America held a breakout session on fighting the trans agenda in the schools.

And yet, here is Schlapp’s tweet. Here is the head of CPAC affirming transgenderism.

So what is going on? Here is what I think. In the wake of the Biden administration’s extremism and Republican Glenn Youngkin’s victory in Virginia, the GOP wants to ride the wave. They want to be the “party of parents.” But it’s cynical. They don’t really mean it.

They want to ride that wave only for the sake of being against the other party, not to be for something good. They will ride this issue to electoral victory and then fail to stop it once in power, as they did with their opposition to Obamacare. In that case, the Republican establishment just failed. In this case, they are on the other side.

Just three months ago, Ronna McDaniel, head of the Republican National Committee, advocated an “RNC Pride Coalition.” Speaking at the Log Cabin Republicans’ annual fund-raising dinner, she said they “enrich it [the party] by adding unique perspectives to our party and recruiting even more diverse candidates and supporters to join our cause.”

Also speaking at the dinner, held at Mar-a Lago, Trump’s acting director of National Intelligence — an appointment that made him the first openly gay cabinet member — and his ambassador to Germany, celebrated the party’s acceptance of LGBT members. Richard Grenell was proud to be part of “an event where the former president of the United States and first lady are welcoming us, and hosting 600 influential gays, lesbians and their straight allies.”

This is where the heart of the GOP establishment really is. Matt Schlapp’s tweet is of a piece with it.

The GOP Establishment and Us

The GOP establishment has been trying to keep social conservative support while sidelining our issues for a long time. At no single moment in time did they reveal where their heart is more than in 2012, when in the wake of Romney’s defeat, the party leadership issued an “autopsy report.” The Growth and Opportunity Project said the party needed to drop social conservatives.

It didn’t say so out right, of course. The party wants to keep us — and our votes, our money, and our energy. It signaled its real goal in claims like “When it comes to social issues, the Party must in fact and deed be inclusive and welcoming. If we are not, we will limit our ability to attract young people and others, including many women, who agree with us on some but not all issues.” And “We win the economic message, which is the most important to voters, but we then lose them when we discuss other issues.”

This was supposedly the only path to a victorious and sustainable GOP in a changing America. The last ten years has completely contradicted that report. Trump won in 2016 by doubling down on white voters (and lost in 2020 when they went back to the Dems, even as he increased his minority vote). Trump played up culture at the expense of fiscal conservatism. And now, as with Glenn Youngkin, fighting the trans agenda in the schools is a real thing.

The problem for the GOP establishment is that the pro-family movement turned out to be prophetic. Thanks to the coronavirus pandemic and children Zooming into their classes from home, parents finally saw the radical indoctrination happening in the schools. Thanks to Lia Thomas and his peers, many people are seeing what the LGBT movement really wants. Thus the wave of indignation and activism the GOP hopes to ride.

Who They Really Champion

The GOP says they want to fight it too. They want to champion those parents. But when I see Ronna’s attempted alliance and Schlapp’s tweet, I’m reminded who they really champion. The same people they championed, without saying so out loud, in the 2012 autopsy report.

Unless and until the GOP drops its support for the LGBT agenda, they are not “the Parents’ Party.” They’re “the Donors’ Party.”

A Senior Contributor to The Stream, Peter Wolfgang is president of Family Institute of Connecticut. He lives in Waterbury, Connecticut, with his wife and their seven children. The views expressed on The Stream are solely his own. His previous article was A Year Without Rush Limbaugh, and Why I Miss Him.

The Brew: Kamala Deliberately Being Strange to Avoid Becoming President? Her Latest Head-Scratcher