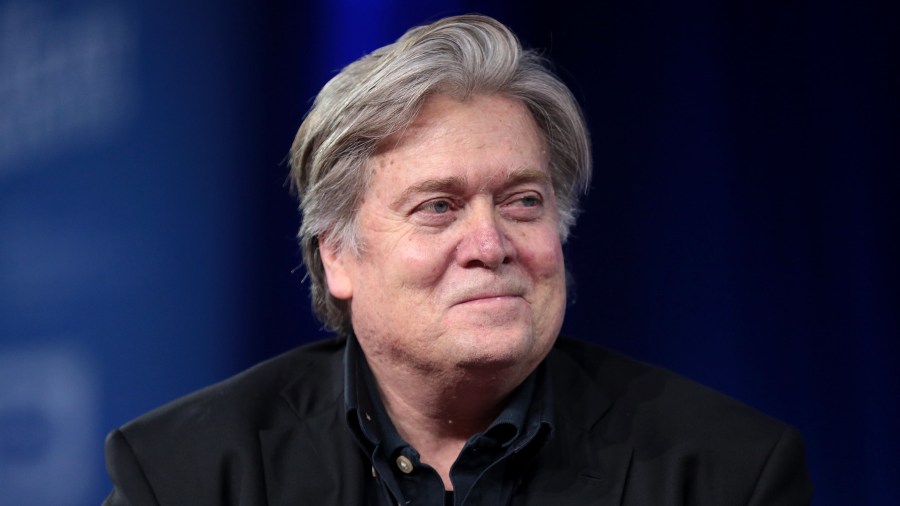 On Friday, after less than three hours of deliberation by a DC jury, former Trump strategist Steve Bannon was found guilty (surprise!) on two counts of criminal contempt of Congress for refusing to cooperate with Nancy Pelosi’s January 6 kangaroo court.

To those who think our use of the term “kangaroo court” is just an example of the rampant partisan hyperbole so common in 2022, I assure you we’re not being flip or exaggerating. Here, once again, is the Merriam-Webster definition:

kan-ga-roo court (noun) 1. a mock court in which the principles of law and justice are disregarded or perverted 2. a court characterized by irresponsible, unauthorized or irregular status or principles

That is exactly what the J6 committee is. Both definitions work. So why shouldn’t Bannon refuse to honor their subpoenas?

Allegiance to Trump is the Real Crime in DC

Prosecutor Molly Gaston told jurors that Bannon “didn’t want to recognize Congress’ authority or play by the government’s rules.” To that, I’d say it’s the government that hasn’t been playing by the rules, and Bannon’s (and Peter Navarro’s) non-compliance is shining a big spotlight on that, conviction or no conviction.

“When he chose to deny a congressional subpoena, that was a crime,” the prosecutor told the jury. “The defendant chose allegiance to Donald Trump over compliance with the law.” You and I may safely assume that any allegiance to Trump is the real crime in Washington DC.

This is Round One

The trial went quickly as trials go; it lasted four days. Bannon was found guilty of 1) willful failure to appear for testimony, and 2) willful failure to provide records. Sentencing is scheduled for October 21, with Bannon facing anywhere from 30 days to a year in prison. He could also face fines of between $100 to $100,000. Bannon said to Tucker Carlson Friday night, “If I go to jail, I go to jail…I support Trump and the Constitution, and I’m not backing off one inch.”

“This is an ideological war, and we cannot lose. The fate of the country is [decided] over the next couple of years.” — Steve Bannon

But Bannon attorney David Schoen was confident after the trial that the verdict would not stand. “This is round one,” he said. “You will see this case reversed on appeal.” He called the appeal “bulletproof.”

Bannon said, “We may have lost the battle here today; we’re not going to lose this war.”

Bannon is the first to be found guilty of criminal contempt of Congress since 1974 (!), when G. Gordon Liddy of Watergate fame had that distinction.

The J6 Committee is Politically Biased — And the Sky is Blue

There was a potential conflict of interest that apparently fell on deaf ears in the jury box. Bannon’s lawyer, Evan Corcoran, told the jury that the prosecution’s case stands or falls with the testimony of January 6 committee staffer Kristen Amerling, and that Amerling has an interest in the outcome of the case. Corcoran told them that politics were at play, that Amerling “has been doing committee work for the Democrats for 20 years” and has donated money to Democrat causes. She also has a relationship with prosecutor Molly Gaston going back 15 years.

Of course, since this is Washington DC, donating money to Democrats is just what everybody does.

Believe it or not, the Huffington Post actually has a pretty straightforward account of the proceedings, so I’ll link to it here. One thing HUFFPOST mentions that we found amusing: the judge in this case, U.S. District Court Judge Carl Nichols, actually warned the defense not to claim in court that the January 6 committee was politically biased. That’s like telling them not to say the sky is blue.

Headed to the Supreme Court?

Jonathan Turley said this guilty verdict was one of the more predictable he’d ever seen, as Bannon “didn’t put on a defense,” calling no witnesses. (I would add that since this was a DC jury, Bannon probably thought, “Why bother”?) Turley assumes Bannon will have more to say in his appeal. He would’ve told Bannon to just show up for the committee and then take the Fifth.

Well that might be the most solid legal advice, but personally, I kind of like the idea of ignoring subpoenas from this (yes) kangaroo court. Bannon’s argument was that he didn’t have to respond to the committee because he was covered by executive privilege. Now, as I like to remind my readers, I am not a lawyer, but it seems to me that since Trump waived executive privilege for Bannon, that might not have been the best defense in his case. I’m thinking my defense would be that since the committee is bogus, there’s no obligation to take a role in this disgusting piece of political theatre.

Oh, but wait — Judge Nichols ruled specifically that Bannon’s attorneys couldn’t argue his subpoena was legally invalid. (I am not kidding.) So scratch that idea. They also weren’t allowed to subpoena January 6 committee members to come to court and testify. (It’s okay if they don’t cooperate with him.) So if Turley expected Bannon to put on more of a case, what exactly was he supposed to use?

If Bannon is wedded to the executive privilege argument, it’s likely by default, as the judge is allowing him nothing else. Still, he might see his appeal go all the way to the Supreme Court (which perhaps was the idea all along). Decisions in this case will almost certainly impact Peter Navarro’s case as well, as he, too, has refused to comply.

Tucker Carlson noted Friday that “contempt of Congress” is a crime for which Democrats are never held accountable. Eric Holder, Lois Lerner, James Clapper, the list goes on. He also said that Bannon had essentially nothing to do with January 6 and had left the White House three years before it happened. “It didn’t matter.” Tucker said. “He annoyed the right people.” Tucker went on to give other examples of the double standard, particularly when it came to FARA, the Foreign Agents Registration Act. That’s another law that seems to apply only to Republicans.

Maybe that’s something else Bannon’s attorneys can use in his appeal. Can you say “selective prosecution”?

But that’s par for the course at today’s DOJ. Trump supporter Mike Flynn’s life was destroyed with a bogus charge of lying to the FBI in a set-up, ambush interview. Trump supporter George Papadopoulos served jail time for, the FBI said, not being “forthcoming” with them after they targeted and spied on him. In glaring contrast, Democrat Michael Sussmann was acquitted by a DC jury of lying to the FBI, when Special Counsel John Durham had him dead to rights.

An Ideological War We Cannot Lose

Bannon appeared on Tucker’s show Friday, to say we need a real January 6 committee. But that won’t be possible until Republicans “have a sweeping victory in the House.” Intelligence failures, FBI involvement, DHS involvement, the intelligence services, what happened to the Pentagon and the National Guard, Ashli Babbitt — all of that needs to be looked into. And it will be.

“It’s outrageous what the public doesn’t know about this,” he said. And later, “This is an ideological war, and we cannot lose. The fate of the country is [decided] over the next couple of years.” The Republicans will have to deliver “a crushing blow…and then, we have to really govern…on offense.”