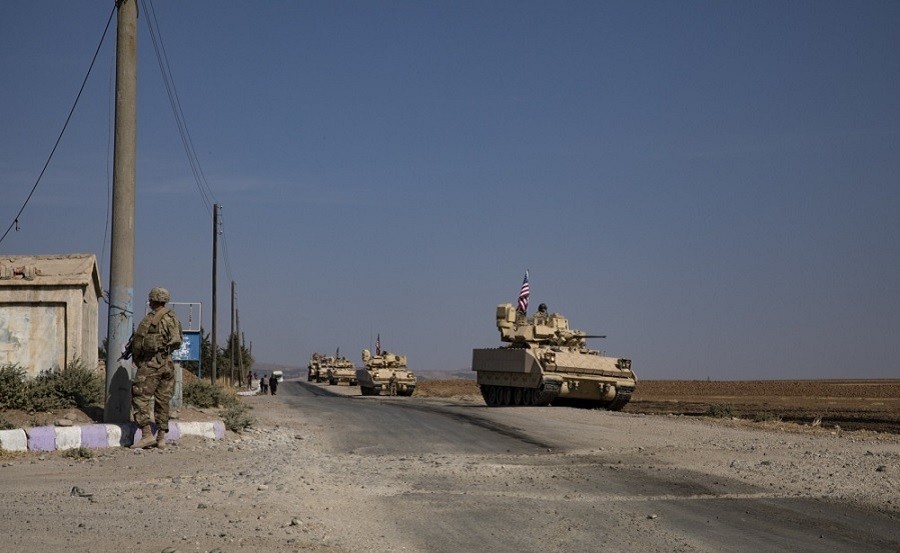 U.S. Army soldiers maintain relations with a local village during a convoy through northeastern Syria on October 11, 2020.

Brave U.S. troops are still at war with ISIS and other terrorist groups in Syria.

As the above image shows, American convoys are traveling through northeastern Syria to not only hunt for terrorists, but connect with the local population. U.S. forces are also busy meeting with local leaders and oil field workers.

On Wednesday, Secretary of State Mike Pompeo said that the approximately 600 U.S. troops serving in Syria will not be pulled out as any part of deal to secure the release of American hostages, including journalist Austin Tice and psychotherapist Majd Kamalmaz.

“The president has said clearly we don’t pay for the return of hostages,” Secretary Pompeo said in a State Department news conference on Wednesday, as transcribed by Yahoo News. “We work to make the case that they need to get these people returned.”

Attacks by the Taliban continue to increase in Afghanistan, according to a report this week by Fox News.

“National Defense Secretary Robert O’Brien affirmed this week that the Pentagon was working to carry out President Trump’s vow to further diminish U.S. troop presence in Afghanistan, slashing numbers to just 2,500 by early next year,” Hollie McKay wrote. “However, Trump has pushed the envelope even further in recent days – advocating that all troops be brought home by Christmas.”

As The Stream reported last week, it is unknown whether the U.S. military will be able to fully withdraw from Afghanistan by the end of the year. What is known, however, is that the country is still a very violent place.

“Afghanistan is probably at its most fragile point since the U.S. toppled the Taliban regime,” Kamran Bokhari, director of analytical development at the Center for Global Policy, told Fox News. “The Afghan jihadist movement not only has the upper hand in the battlespace, it is also emboldened by the deal with the United States.”

Please continue to pray for the thousands of brave men and women in uniform still serving in Syria and what is now America’s longest war in Afghanistan. May God protect them and comfort their families.

At home, courageous military warriors are still fighting a war on COVID-19. Across the nation, tens of thousands of troops are mobilized to help their fellow Americans cope with the ongoing pandemic.

“These last few months have been an adventure for every state dealing with COVID-19, and our Soldiers and Airmen of the New York National Guard have done a tremendous job in being flexible and responsive and being there for their fellow citizens for whatever missions come our way,” Maj. Gen. Ray Shields said. “Along with all our leaders, I am especially proud of what our service members have accomplished.”

Soldiers and Airmen with the @NationalGuardNY continue to help staff 15 COVID-19 drive-in test sites across the state from Long Island to Buffalo. As of Oct. 15, members helped administer 661,683 tests at those locations. https://t.co/eQLjY0T8Tn #InThisTogether

In Georgia, soldiers are handing out food to needy residents across the state.

Another aspect of the coronavirus pandemic that should not be overlooked is its impact on the huge issue of military suicide, as The Stream reported in July.

“Some of the scientists have said they’ve not been able to show causation between COVID and suicide, but I would argue, at least my sense is, it is having an effect because it disconnects people,” said Gen. McConville, as quoted by The Hill.

Please join me in praying for all active duty troops and veterans being affected by this pandemic. You are not alone and your country loves you.

If you are a service member or veteran contemplating suicide, please call the veterans suicide hotline at 1-800-273-8255 or text 838255. If you want to be put in touch with a fellow veteran who has experienced depression or despair or just want to talk, please e-mail me anytime at [email protected]

With the presidential election between President Donald Trump and former Vice President Joe Biden less than two weeks away, hundreds of veterans are stepping forward to volunteer at polling sites across the country amid the pandemic.

“I think that veterans can sort of stand up and lend some legitimacy, some cover to that process,” Iraq war veteran Joseph Jenkins told McClatchyDC’s Tara Copp. “That’s just one trusted institution, one sacred institution protecting another one.”

May God bless all of our nation’s selfless veterans.

A group of Ohio National Guard soldiers recently returned to Cleveland after spending the last year at war in the Middle East. 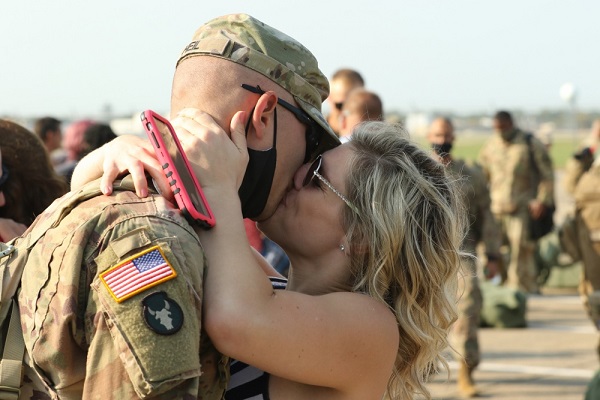 A couple shares a kiss as Ohio National Guard soldiers return from a deployment to the Middle East on September 25, 2020, in Cleveland.

Welcome home, warriors! Thank you for defending our freedom overseas.