This week's salute to our brave men and women in uniform contains a call to action about a huge issue affecting our troops and veterans: suicide. 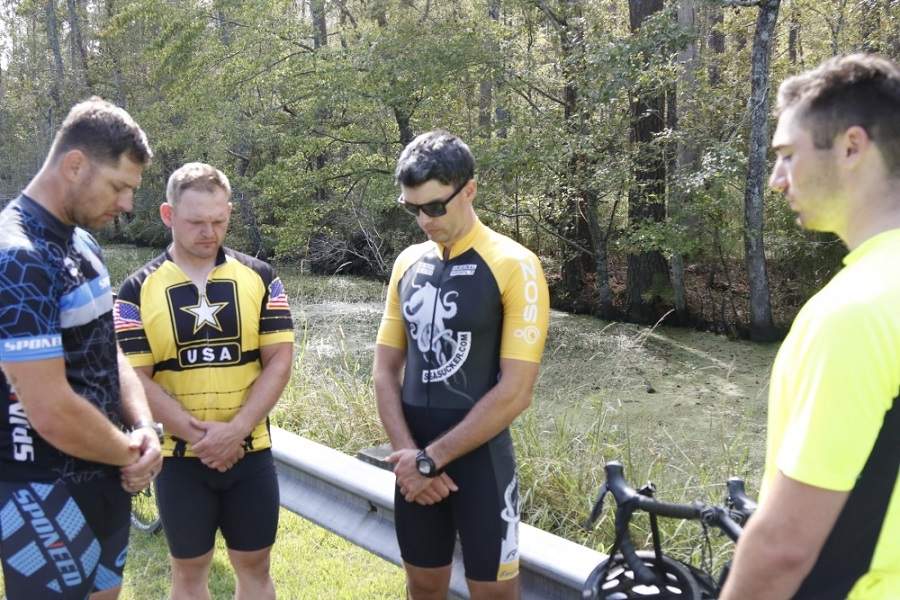 Soldiers and combat veterans pause for a moment of silence to reflect on the veterans they've learned about during the September 2019 Veteran Suicide Awareness Bike Ride in Columbia, North Carolina.

“Twenty veterans every day take their lives by suicide.”

Those jarring words were uttered on Wednesday by Secretary of Veterans Affairs Robert Wilkie during a conference call that included Vice President Mike Pence. I was honored to not only listen in on the conversation, but spread awareness about military suicide and how we can all join together in helping heroes in need.

“As the son of a combat veteran, as the father and father-in-law of two members of our Armed Forces, it is heartbreaking for me to think that every year, more than 6,000 veterans, guardsmen, reservists, retired active duty, lose their lives to suicide,” Vice President Pence said. “It’s almost hard to even say it out loud.”

The vice president and his wife, Second Lady Karen Pence, are leading the Trump administration’s support of a new Department of Veterans Affairs PREVENTS program called REACH, which aims “to change the conversation around suicide by urging people to recognize their own risk and protective factors — as well as the risk and protective factors of their loved ones,” according to the VA.

During the call, Vice President Pence specifically asked those who believe in God to also believe in our nation’s veterans.

“We need men and women of faith to meet this moment for the American people and America’s veterans,” the vice president said.

During a heated election year, it was refreshing to hear a politician speak from the heart without even the slightest hint of partisanship. It was obvious to anyone listening that the vice president cares deeply about ending military suicide.

I personally know veterans who have considered ending their lives while also mourning fellow veterans who have tragically committed suicide. I stand with any national leader – Republican, Democrat, or Independent – who shines a light on these heroes and their families. It is also a bold and smart strategy to enlist people of faith in taking this extraordinary effort to the next level.

This week, we had an inspiring virtual conversation with faith-based leaders from across the country about the important role their communities play in suicide prevention. Watch to learn more & visit our site to see how YOU can get involved: https://t.co/Z07oeL7vOI. #REACHnow pic.twitter.com/EcM3Dz8kbw

How can you help? You can start by taking this online pledge.

Please encourage your church and community leaders to talk openly about suicide and assure everyone — especially veterans — that you are there in their time of need. While taking the pledge is a start, VA Secretary Wilkie ended his remarks by quoting an even more sacred pledge from the Book of Joshua: “I will not fail thee nor forsake thee.”

If you are a service member or veteran contemplating suicide, please call the veterans suicide hotline at 1-800-273-8255 or text 838255. If you want to be put in touch with a fellow veteran who has experienced depression or despair or just want to talk, please e-mail me anytime at [email protected]

To our brave troops and veterans: You matter. From this day forward, we will not fail you or forsake you.

For the first time in American history, a woman has joined the ranks of the U.S. Army’s legendary Green Berets.

According to Military.com, “U.S. Army Special Operations Command would not identify the soldier, but confirmed that she graduated from the 53-week course in a ceremony at Fort Bragg, North Carolina.” All military jobs, including combat roles, have been open to women who can successfully complete the required training since 2015.

Just before our country celebrated its independence, America lost another hero to its longest war.

Spc. Vincent Sebastian Ibarria, 21, of San Antonio, died Friday as a result of the incident, which is under investigation, a statement said. The accident happened in the capital of Farah province in the country’s southwest.https://t.co/KGMMN5zxNN

U.S. Army Spc. Vincent Sebastian Ibarria, of San Antonio, Texas, was killed in a July 3 vehicle accident in Afghanistan’s Farah province, according to the Pentagon. The soldier was just 21 years old and is the ninth U.S. service member to be killed in Afghanistan this year.

“The entire warrior team mourns the loss of Vincent,” said the 1st Infantry Brigade Combat Team said, as quoted by Stars and Stripes. “Our thoughts and prayers are with Vincent’s family, friends, and fellow soldiers.”

Please pray for all who knew and loved Spc. Vincent Sebastian Ibarria.

It’s important to continually acknowledge and thank the thousands of American service members risking their safety during the ongoing war on coronavirus. Every single week, these heroes – many of whom are serving with the National Guard – quietly help ordinary Americans struggling during this deadly pandemic.

Thank you to each and every American hero fighting COVID-19. You are administering tests, guarding hospitals and nursing homes, delivering supplies and performing countless other essential duties. Your daily sacrifices are noticed and deeply appreciated. We humbly ask God to keep you and your families healthy and safe.

A group of U.S. Navy sailors returned to San Diego this week after spending the last six months at sea. 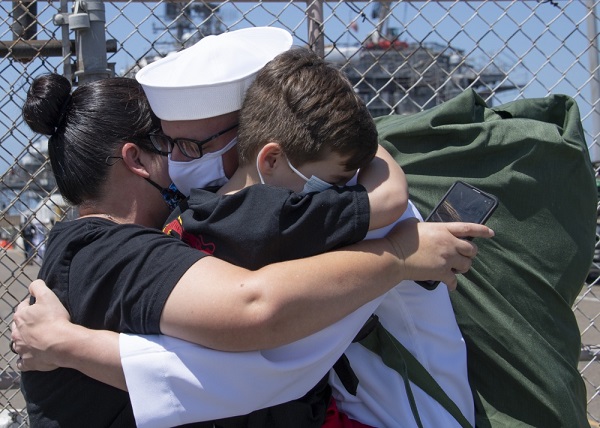 A U.S. Navy sailor assigned to the guided-missile destroyer USS Russell hugs his family following the ship’s return to Naval Base San Diego after a six-month deployment.