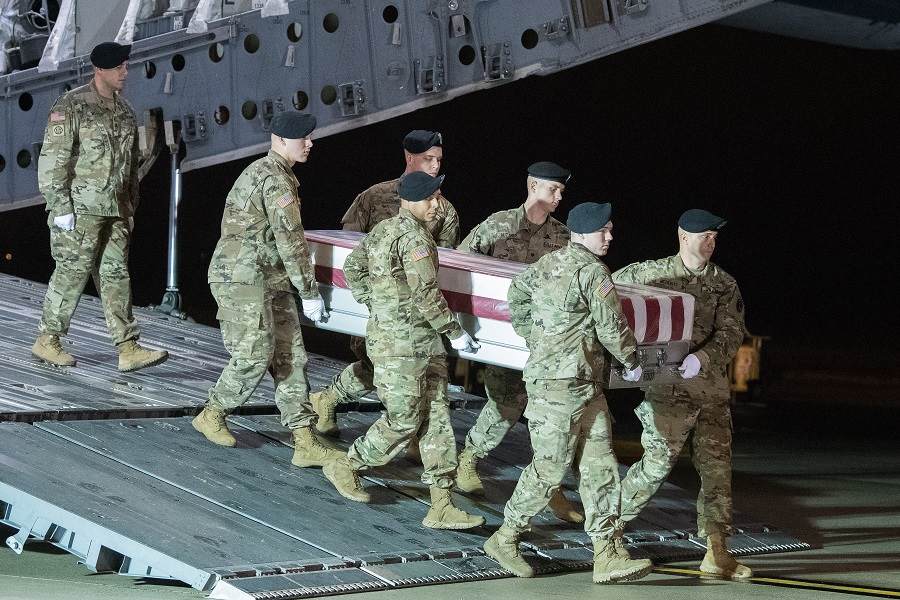 A U.S. Army carry team transfers the remains of fallen Pfc. Miguel Villalon, of Joliet, Illinois, on January 14, 2020, at Dover Air Force Base in Delaware.

Two American soldiers were killed during the war in Afghanistan on Saturday when a Taliban improvised explosive device blew up near their vehicle in Kandahar Province, according to the Pentagon.

United States Army 82nd Airborne Division paratroopers Pfc. Miguel Villalon, 21, of Joliet, Illinois, and Staff Sgt. Ian McLaughlin, 29, of Newport News, Virginia, were killed in the attack, also according to the Department of Defense. Their flag-draped caskets arrived on American soil on Tuesday at Dover Air Force Base in Delaware.

“We are grateful for all our kids,” East Aurora High School Naval ROTC instructor George Allen told the Aurora Beacon-News. “But Miguel was special in that he wanted to do so much to help the community and his unit.”

Denise Crosby’s column has more details on Pfc. Villalon’s brief but extraordinary life. The future warrior was just a toddler when the first soldier from his area was killed in Afghanistan. Even after growing up in the shadows of war, the selfless young man volunteered to serve in uniform upon graduating high school.

The All American Division mourns the loss of two @PantherBrigade Paratroopers. SSG McLaughlin and PFC Villalon, both combat engineers, were killed by an IED in Kandahar, Afghanistan yesterday. Both Paratroopers embodied the values of an All American and will not be forgotten. pic.twitter.com/1izfr9BwgJ

Staff Sgt. McLaughlin was married with four children, according to WVEC-TV.

“It’s a tremendous loss for all of us,” the fallen soldier’s mother, Glenna Carroll, told the television station. “His whole world was his children and his wife…and he is just the perfect example of a wonderful father, a wonderful son, and man. And he served his country bravely.”

The 18-plus year war in Afghanistan is still having a staggering toll on military families like the McLaughlins and Villalons, even if millions of Americans aren’t even aware that the conflict continues to this day.

“Since 2012, when we pulled troops out of Iraq, the war on terror has been placed on a far back burner for most of us,” Crosby wrote in her column. “In fact, we probably give little or no thought to the dangers of this unfinished war…”

As the 82nd Airborne community mourns Pfc. Villalon and Staff Sgt. McLaughlin, the Division is also dealing with the rapid deployment of thousands of troops to the Middle East to combat the threat posed by Iran.

A troubling Military Times story published Wednesday said the families of some soldiers “have been getting threats and disturbing messages” through social media.

“We have done several things to inform our paratroopers and families of these risks and ways that they can protect themselves,” Lt. Col. Mike Burns told the Military Times. “I also personally spoke to the brigade [Familiy Readiness Group] leaders today.”

These harrowing events and the Military Times report remind us to pray not only for all American troops in and around the Middle East, but their families here at home. May God be with you during this scary and unsettling chapter of your lives.

A large group of airmen from the Connecticut Air National Guard were recently saluted following a four-month deployment to Southwest Asia. 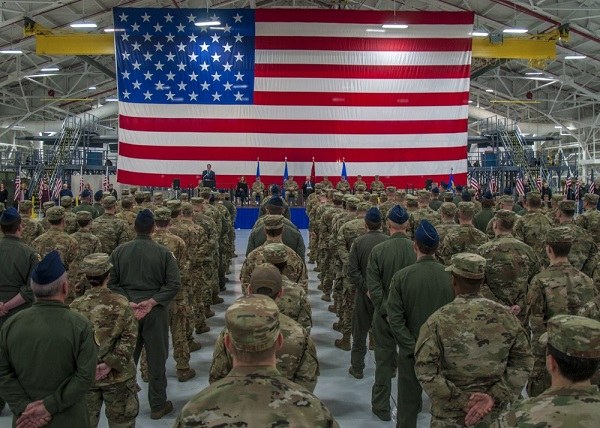