The Republican Gift Biden Should Accept … But Won’t

The latest on the Washington maneuverings over the disputed 2020 Election.

Eleven GOP Senators, led by Sen. Ted Cruz, are offering old Joe Biden this gift: a unified country that accepts him as president-elect. They are calling for a 10-day emergency audit of the November election results. They will challenge Wednesday’s election certification until the audit is completed.

It’s a gift to Biden … if he’s not too dull or demented to jump at it.

Now, Joe and the Democrats and RINOS can do what they’ve done since November. That is, fight tooth and nail against any legitimate effort to investigate the election. Threaten lawyers who take up the cause. Fire whistleblowers who come forward. Turn a blind eye to video proof of shenanigans. Declare “baseless” without proof the claims by the thousand or so eyewitnesses who’ve sworn affidavits or publicly testified.

Basically, tell 75 million people who saw before their own eyes what by any logical measure was an election heist, to “Shut up, chumps, and accept it.”

Yes. Joe can just huddle in his basement, and let things ride. Barring some shocking turn, even after House and Senate Republicans force a floor debate on the evidence Wednesday, Democrat votes will carry the day. Joe Biden will officially be declared the next President of the United States.

But what a weak and hollow victory it will be, with half the voting public not only convinced the election was fraudulent, but rightfully convinced Biden does not care about their concerns.

That’s no way to start an administration. Especially after all your teleprompter’s talk of “unity.” You’re dead in the water.

Or … Biden can start off swimmingly. He can jump at the opportunity presented by Cruz. He can get behind the 10-day emergency audit. Insist on it. After all, it’s not only what’s best for the country. If the election was as clean as we keep being told it was, he’s the biggest beneficiary!

He is not only proven the winner, he has proven that he is willing to go the extra mile for those who didn’t vote for him. He shuffles into the Oval Office with a unified country behind him.

Refuse the emergency audit and, well, the refusal speaks for itself. Dr. Michael Brown lays this argument out beautifully in his great new column. And uses a wonderful analogy.

It’s like the little boy who did not eat the cookie telling his mother, “Mommy, look at my teeth, look at my hands, check my pockets. I didn’t eat it!”

In contrast, the little boy who did eat the cookie doesn’t want to show his hands or open his mouth for fear of crumbs being found. Instead, he starts crying, “Mommy, you’re hurting my feelings. Why don’t you trust me?”

Unfortunately for Joe and the nation, Biden has never shown a willingness to be politically bold or brave. Or for that matter a man of integrity. And since Election Day he has done absolutely nothing to ease the concerns of the masses worried the election was crooked.

Instead, he speaks like a child with a mouth stuffed with cookies and hands dirty with chocolate.

And why not? Especially with so many of establishment Republicans happy to see Trump booted to Mar-a-Lago.

Take Sen. Pat Toomey of Pennyslvania. Despite obvious corruption and unconstitutional actions in his state, he wants no part of efforts to challenge the election. He’s attacked both the Cruz effort and Sen. Josh Hawley, the first Republican to say he would stand and object to certification of the disputed swing states.

Hawley has now struck back, challenging Toomey to a Senate floor debate on the merits of the election fraud allegations. For example, how Pennsylvania violated its own election laws. 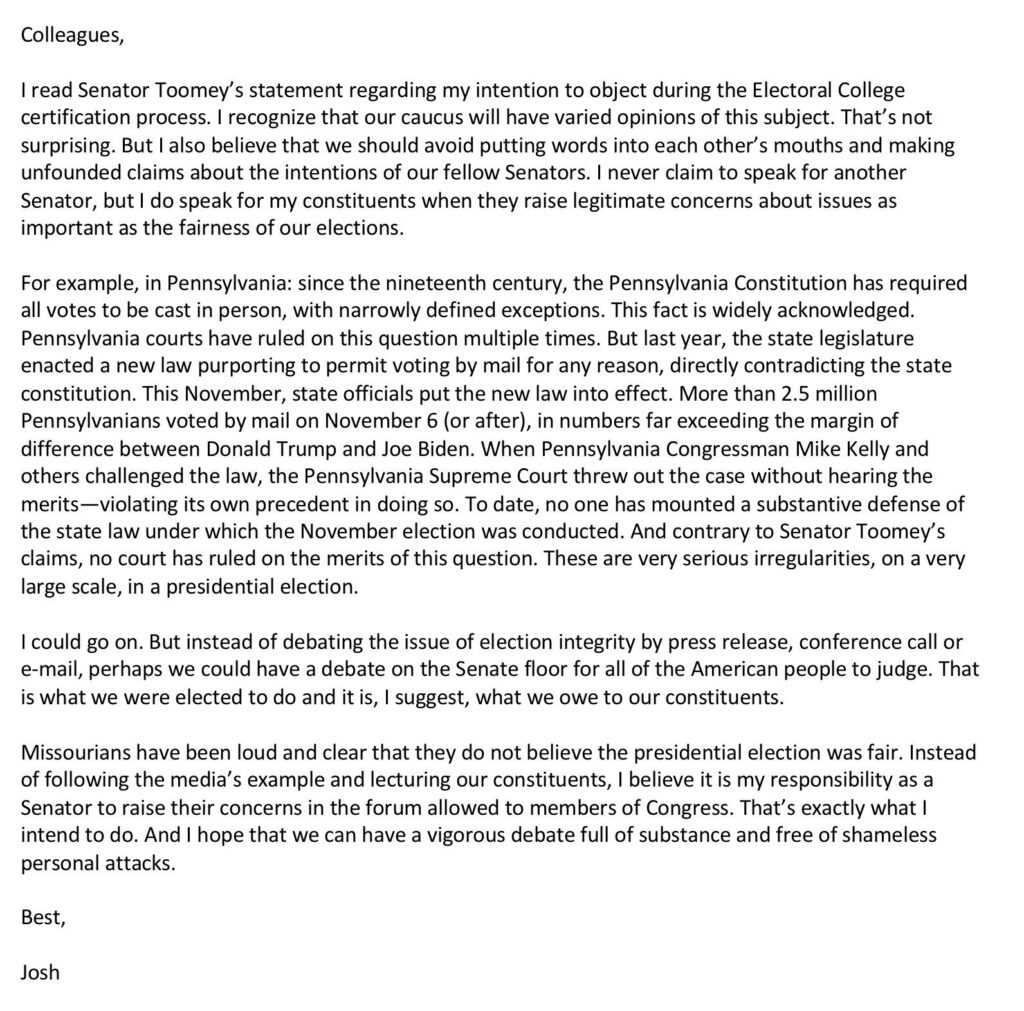 All Eyes on VP Pence

As we wrote about last week, all eyes are Pence. Pence, as President of the Senate, is in charge of Wednesday’s joint session when the electoral votes are counted … and challenged. Just how far will he push his authority under the Constitution and the 1887 Electoral Count Act?

Pence did not support Rep. Louis Gohmert’s efforts to force a federal court to declare that the VP had the “exclusive authority” to accept or reject electors. That case was thrown out Friday.

However, in a statement Saturday, Pence’s Chief of Staff Mark Short said:

Vice President Pence shares the concerns of millions of Americans about voter fraud and irregularities in the last election. The Vice President welcomes the efforts of members of the House and Senate to use the authority they have under the law to raise objections and bring forward evidence before the Congress and the American people on January 6th.

But what’s that mean? Just cheering on the effort doesn’t move the ball.

What Pence will or won’t do adds to Wednesday’s drama. Will he take the 12th Amendment out for a spin? His support of the challenge effort suggests he will not act before House Republicans object and the GOP Senators second the objection. But could something else be in the works?

After all, we are talking about @RealDonaldTrump.

Trump Urging the Fight and Pumping the January 6 Protest

If we’ve learned anything about Trump, it’s that he does not give up. He plays all the angles and if that doesn’t work, he comes up with some new ones. What we do know is:

Could a Trump first term end any other way but wild?