The Bravery and Brilliance of Detransitioner Chloe Cole 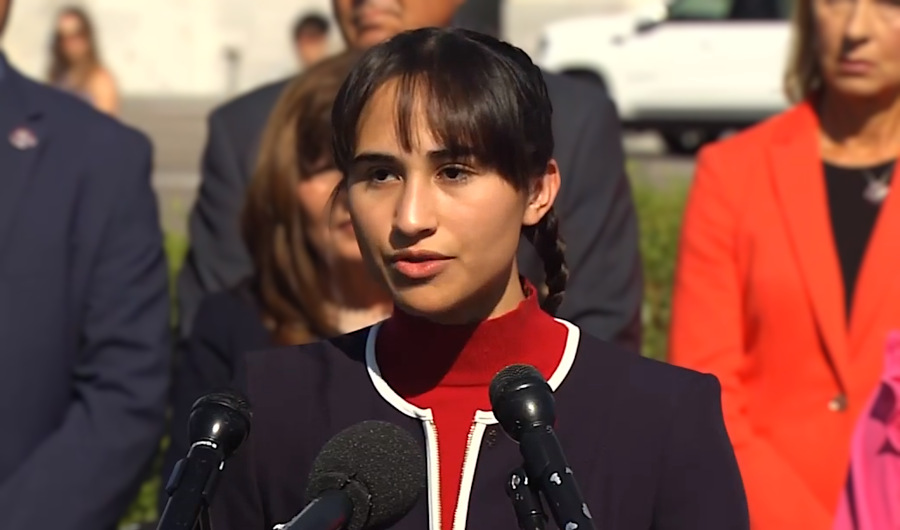 “So who’s your favorite band?”

Chloe Cole doesn’t hesitate to answer. “I like all kinds of music,” she says. “I listen to everything. I like all of it.”

It’s not a surprising answer. Cole, 18, has become a popular face of those who are raising serious questions about transgender ideology. Cole, who grew up in Northern California, was 11 years old when she was first exposed to gender ideology via online platforms. She was also diagnosed with autism and ADHD at age 7, things she says are “common comorbidities with gender dysphoria.” Cole was put on puberty blockers and testosterone at 13 years old, and then underwent a double mastectomy at 15.

To see a beautiful and intelligent teenager up close and really know that this child of God has been mutilated is to realize that the cheerleaders and activists for the transgender movement are demonic.

Cole spoke about her ordeal Tuesday at the Heritage Foundation, and to see and hear it live was incredibly powerful. It also explains why after the talk I went up to her and asked this brave and brilliant teenager who her favorite band is. After hearing her explain the trauma she endured, I just felt like I wanted Cole to be able to express some joy. For me, joy has always come from popular music. Cole’s answer that she “likes everything” did not surprise me. She has a capacious mind and speaks with incredible eloquence and the ability to hold several thoughts in her mind at once. She also likes art and graphic design.

Cole was interviewed for an hour at Heritage, and what she said at the tail end of her interview is as important as the horror story that came before. Cole emphasized that “conservatives can be better” when it comes to empathizing with kids who may be on the autism spectrum and suffering from gender dysphoria. It’s a sharp, good point that deserves emphasis.

Most people with gender dysphoria are not political activists, but suffering human beings. They have no interest in, and are appalled by, the idea of grooming young children for sexually inappropriate and even criminal behavior.

Of course, there is also an evil, demonic and activist element that does indeed want to corrupt children and sexually groom them. These people need to be resisted at every turn.

One sad memory from her talk involves the day she was wheeled into the hospital to have her breasts removed. Cole describes making eye contact with a young male nurse in the room — a nurse who had a look of uncertainty on his face. “I think he was thinking, my God this is just a kid,” Cole said. That one nurse with an attack of conscience needs to become a movement.

We Are Battling Against the Demonic

So what to do? After hearing and meeting Chloe, the first thing is obvious: immediately stop operating on kids and teens who are confused about their gender. In her talk, Cole used the language of horror movies and tragedy, to a room that often gasped with shock at what she described.

After she became depressed after her surgery, she said she felt “like a monster.” Cole then said she regrets how “the beauty of motherhood” was lost to her forever at an age when she should have been playing softball and going to pop concerts with her parents. “At 15, I wasn’t really thinking,” she says. “I was a kid, just trying to fit in. I was not thinking about the possibility of becoming a parent.”

It’s one thing to see someone on TV and read about her on social media. To see a beautiful and intelligent teenager up close and really know that this child of God has been mutilated is to realize that the cheerleaders and activists for the transgender movement are demonic. These are Satan’s shock troops who are out to destroy manhood and womanhood.

These Are Warnings We Must Heed

Again, and as Chloe noted, the activists are often non-trans agitators, not those suffering from gender dysphoria, or their family and friends who want to address the issue with love and faith and science and reason. Cole is still suffering side effects from her surgery. She says the operation “severed the nerve endings” and that “the sensation is never the same again and there are permanent changes in pigmentation. It might not ever look the same.” She says her skin is not really healing over and “emits this fluid constantly.” She has to “wear non-adhesive bandages all the time.”

Cole refused to blame her parents for what happened, saying that she was often a difficult child to raise and that her parents were “confused and looking for answers.” At that point the gender clinic “presented my parents with a false dichotomy: Would you rather have a dead daughter or a living son?”

Chloe Cole received a standing ovation after her talk. Pray that more people heed her warning.

Loving Our Neighbors, Telling the Truth About Identity and Gender