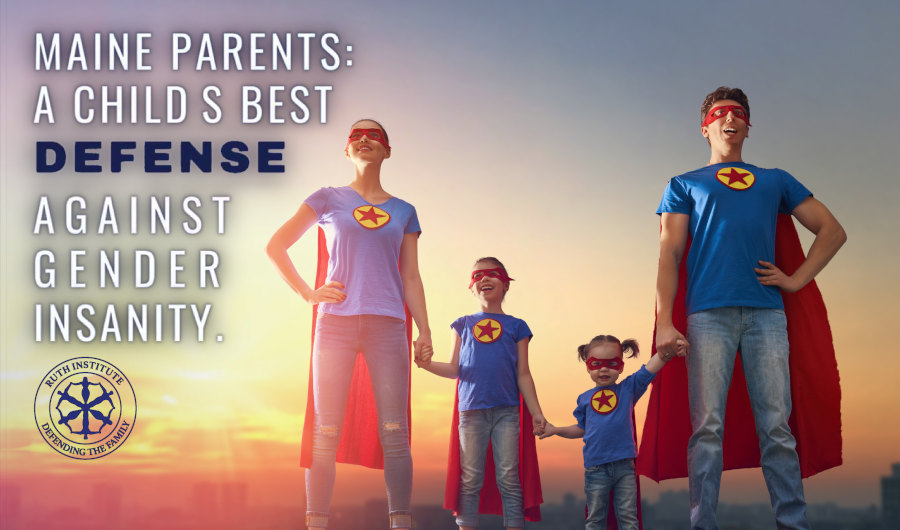 “Paris, Maine, deserves the thanks of parents across the country,” said Ruth Institute President Dr. Jennifer Roback Morse, Ph.D. “By voting to remove two school board members who were promoting the Sexual Revolution, the town has taken a stand for gender sanity.”

The recall vote, which passed 333 to 243, was sparked by a proposed policy, which not only would have allowed students to use restrooms and showers of the opposite sex, but also would have prohibited teachers from notifying parents of a student’s gender confusion.

Morse explained: “Teachers would have been forbidden to talk to parents about conversations with their children regarding so-called gender identity.”

“The Sexual Revolution thrives in ignorance. Whenever children are involved, the objective is to take parents out of the picture.”

“A school nurse needs parental consent to dispense aspirin, but teachers are prohibited from talking to families about gender confusion? This is nuts.”

“Rather than shielding children from trauma, encouraging ‘gender transitioning’ opens adolescents to a world of harm,” Morse said. “Most teens with gender dysphoria grow out of it by the time they reach adulthood. However, many who are encouraged to assume the identity of the opposite sex come forward years later to describe the physical and psychological harm involved in the process, especially when there’s surgery.”

Ex-Navy SEAL Chris Beck, who lived as a woman for 10 years and is now de-transitioning, said he was taken advantage of by medical professionals to his lasting regret.

Former “transgender” Chloe Cole testified at a Florida hearing that she identified as trans at age 12 and underwent a double mastectomy at 15. She said, “I was unknowingly physically cutting off my true self from my body, irreversibly and painfully.”

“How dare school officials try to keep parents in the dark when it comes to their children’s mental health?” Morse said. “Good for the voters of Paris, Maine, for standing up for families and children. Parents around the country, take note.”

We Need to Talk About Adoption

The latest Dr. J Show features Elizabeth Kirk, J.D., Director of the Center for Law & the Human Person at the Catholic University of America. She also serves as an associate scholar at the Charlotte Lozier Institute and is the adoptive mother of four children.

“It’s important for us who advocate adoption to not sugar coat it and to acknowledge that it is borne out of difficult, broken circumstances,” Kirk says. “But I think it’s also important to emphasize that adoption is not the problem. Adoption is the remedy … . It’s a beautiful thing from which healing can come.”

“Nearly 90% of people have a positive view of adoption, and yet it’s rarely chosen either as a way to welcome a child into the family or as a response to an unplanned pregnancy. For example, for every one infant placed for adoption at birth, there are 50 aborted.”

“Many women report that the thought of placing their child up for adoption is so difficult that they would rather have an abortion,” Kirk says.

Learn about adoption stigma: “There’s an unspoken view that placing one’s child for adoption is an abandonment of the child.”

Kirk also shares how a lot of pregnancy care centers don’t talk about adoption because they don’t know enough about it, or they, too, think of it as abandonment.

Clearly, that’s got to change because, “It’s important to recognize that adoption is a necessary remedy for children who need a home.”

Learn about Option Hope and about the role of the father in all this by watching the full interview on The Ruth Institute Locals page or on YouTube.

COMMENTARY: To love and to be loved is at the heart of what it means to be human. Kaya Jones found out, the Sexual Revolution assures us that “love is love,” all the while rewriting the real meaning of lifelong, self-giving love.

By Jennifer Roback Morse at NCRegister.

“Kaya Jones, a former singer for The Pussycat Dolls, said the abortions she had when she was younger still haunt her to this day,” begins the Fox News story in which the pop singer recounts her abortion regret. The significance of this story is not that some women regret their abortions. This fact has been known among specialists for some time. No, the significance of this story is that someone with a public platform is finally speaking out and that someone in the legacy news media is finally listening.

Longtime pro-lifers and faithful Catholics knew perfectly well that abortion was taking a toll on women. Elements of Jones’ story are consistent with concerns pro-lifers have long expressed. She “explained how she had her first abortion as a teenager when her birth control medication failed.”

We’ve been saying for years that birth control methods sometimes fail. When they do, the woman is set up for an abortion. That is why we say that contraception and abortion are fruits of the same tree: the idea that everyone can have as much sex as they want without worrying about a baby resulting.

The contraceptive ideology teaches all of us that sex is normally a sterile activity. The ideologues never get around to telling the whole truth about contraceptive failure.

Jones’ testimony also supports the concern that the availability of abortion sets women up for exploitation by unscrupulous men. Pro-lifers have long contended that predatory men can use the unrestricted abortion license to cover their crimes and indiscretions. This very sort of thing happened to Kaya Jones.

The TentMakers of Louisiana: An Interview With Letitia Peyton

In the newest “Ask a Survivor” post, clergy abuse victim Faith Hakesley interviews the parents of a fellow victim, and what they are now doing to help others in their situation.

You never know how your voice and your experiences might become a part of someone else’s story of healing. God calls us all to something different. The important thing is that we remain open to what we feel called to do. The Peyton family of Louisiana is one such example of what it means to answer the call of God.

When Scott and Letitia Peyton’s son came forward about the abuse he had suffered at the hands of a trusted Catholic priest, they were heartbroken. Like many families before them, their faith was shaken and their trust in the church they loved so much was betrayed. They didn’t know where to turn or what to do next.

Clerical abuse presents some unique challenges to victims who often want to seek help that doesn’t involve the Catholic Church. When victims have been so grossly betrayed by the priests and individuals they trusted, turning to the very institution that has all too often protected and defended corrupt priests and other leadership figures becomes impossible.

Thankfully for Louisiana, the Peyton family is taking their own heartbreaking situation and using it to help others. The family started their non-profit organization, the TentMakers, to help victims of clerical abuse by offering resources for hope and healing.

Schools Have Become a Predator’s Paradise

How to Stay Grateful in the Midst of Turmoil