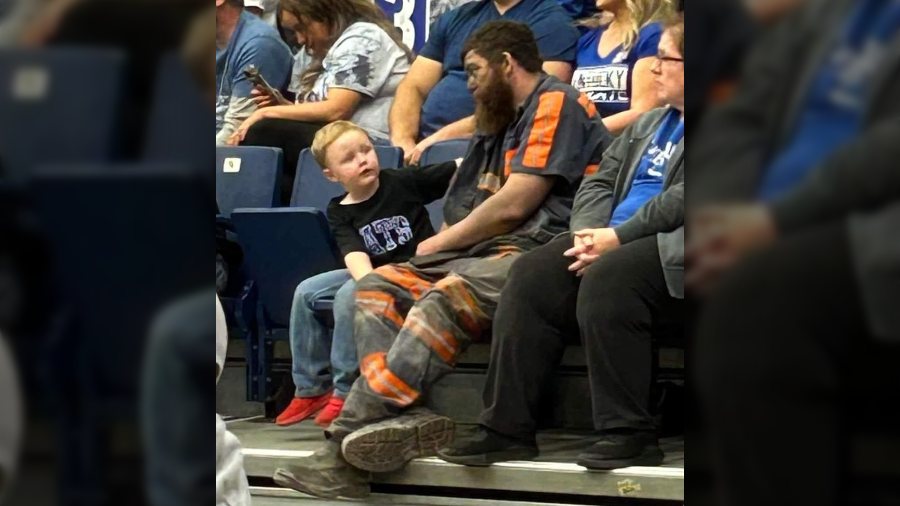 His options after work were to go straight to the University of Kentucky Wildcats basketball game to meet with his wife and 3-year-old son, or go home to shower first and miss half the game. Micheal McGuire, a coal-miner, rushed straight to the game, still covered in soot. The team’s head coach John Calipari noticed him and posted his picture to social media to offer him and his family free tickets to another game.

My family’s American dream started in a Clarksburg, WV coal mine, so this picture hits home.

From what I’ve been told, after his shift, he raced to be with his son & watch our team. Don’t know who this is, but I have tickets for him & his family at Rupp to be treated as VIPs!! pic.twitter.com/a5BJXUnK2v

Michael’s wife, Molly, created a Twitter account to reply to the coach. On social media she praised her husband’s selfless devotion to their family.

“My amazing husband started his day at 4:45am that morning and worked all day. Then drove straight to the arena to meet us and enjoy the game with our son! We are truly blessed with such an amazing man, and beyond thankful! We love our coal miner❤️” she commented on Facebook.

She also posted, “This is my amazing husband Micheal Joe Mcguire! He is an employee of Excel Mining (Alliance Coal) and works hard to provide for our family. It doesn’t matter to him how long he has worked or how hard his day is, he is always there and shows up for our babies! He is the most selfless man ever and always puts his family first! Our babies absolutely adore him and Easton our son tells people he is a coal miner like his daddy

we are beyond blessed and thankful!”

Praise God for Michael and Molly and their sweet example of devotion, love and respect in marriage and parenting.

The Stream’s most devoted animal rescuer is John Zmirak. (He’s written about his rescue dogs on The Stream plenty of times. If you’ve missed them, see here.) John suggested the YouTube channel SaveAFox be highlighted in this week’s Sunny Side. Here’s a cute video of a favorite fox of his, and it seems of many fans: Finnegan Fox. The foxes make some adorable sounds, he notes.

Speaking of John, he’s banned from Twitter, but now that Elon Musk is the new “Chief Twit,” perhaps he’ll be reinstated? At least one Twitter user thinks that should happen anyway.

Two others of my fellow Streamers separately sent me this video. Get your hanky:

The Groom gave the task of carrying rings to the Bride's students with down syndrome. How beautiful… pic.twitter.com/rVt26pRz7J

Here are some more cute videos.

Since @TheFigen_ had one good video, I had to see what other good videos this account had. Quite a few.

If you are caught, just act natural and walk out of the room like nothing happened. pic.twitter.com/c1m7qOHqNV

This kid is generous and hilarious.

If you love pumpkins, know that you’re not alone. Hippos do too, apparently.

This looks like a fun advanced crafts for kids:

Here are some more ideas for simple games for small children, many using toilet paper rolls.

Brain development games to play with your childrenpic.twitter.com/Cd0p6ea6gh

A very rare solar halo appears over a mountain in Sweden. pic.twitter.com/sHQ8cC4FI5

Have a wonderful weekend, folks!

Sunny Side of The Stream: Police Officer Chases Down Alleged Kidnapping Truck Thief, Reunites Young Siblings With Their Father

Sunny Side of The Stream: How has 10 Years of Clean Water Changed the Lives of These Boys?

The Christian Work Ethic: Are You a Worker-for-Hire or Are You Working the Family Farm?