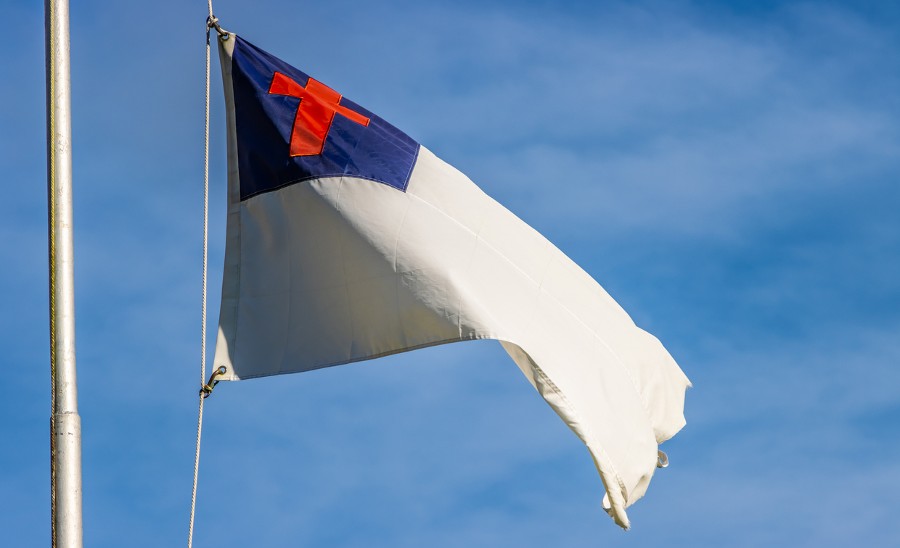 In a stunning 9-0 decision, the Supreme Court concluded that the City of Boston got it wrong when it rejected Camp Constitution’s request to fly the Christian flag on a City Hall flagpole after approving every one of the 284 prior applications.

The case involved Camp Constitution’s Christian flag and the City of Boston’s “public forum” flagpole open to “all applicants.” The question at hand: Can the City of Boston censor Christian viewpoints under the First Amendment Establishment Clause where it designated by practice and policy one of its flagpoles a “public forum” open to “all applicants”?

Whether a private display of a nativity scene, a religious symbol or speech, we gradually began winning under the Free Speech Clause.

The answer is an emphatic “No!” Indeed, on its front page in bold print, the Boston Herald referred to the 9-0 decision by the High Court as a “SUPREME SPANKING” of the City of Boston.

This decision overruled the lower courts’ erroneous opinions in dramatic fashion. It is very rare to get a 9-0 decision from the Supreme Court, and even more rare to get such a ruling regarding religious speech. The High Court took up the case in September 2021 and set oral arguments for January 18, 2022. On May 2, 2022, the Court announced its unanimous decision in favor of Hall Shurtleff, the founder of Camp Constitution.

From 2005-2017, Boston opened a public forum at City Hall for private speech open to “all applicants” to create an environment that welcomed everyone and celebrated Boston’s diversity. Private speakers could temporarily raise a flag on one of the city’s flagpoles during their event. Some of the other flags Boston approved included flags from Turkey (with the Islamic crescent), Cuba, Chinese Progressive Party, Battle of Bunker Hill, Boston Pride, Transgender, Metro Credit Union and more.

To celebrate Constitution Week and recognize the Judeo-Christian heritage of the Founders, Hal Shurtleff and Camp Constitution submitted an application requesting to fly the Christian flag during a one-hour event that would include speakers, some dressed in costume of the Founders’ era, at the base of the flagpole.

In an age when religious freedom is under siege from all sectors of society (military, health care and education, to name a few), how did a frequently divided Court reach a unanimous decision to safeguard against religious viewpoint discrimination in Shurtleff v. City of Boston?

In the written opinion, the Court wrote,

“Boston concedes that it denied Shurtleff ’s request solely because the Christian flag he asked to raise ‘promot[ed] a specific religion.’ … Under our precedents, and in view of our government-speech holding here, that refusal discriminated based on religious viewpoint and violated the Free Speech Clause.”

Gorsuch: How Did the City Get It So Wrong?

As the 9-0 ruling clearly indicates, Boston got it wrong. But how did the city get it “so wrong”? To be fair, Boston decided to apply the “Lemon Test” from a 1971 Supreme Court opinion in Lemon v. Kurtzman … and lost.

The Lemon Test set forth a three-pronged inquiry for religious mottos and displays in public settings. For a motto or display to remain, it (1) must have a secular purpose, (2) must have a principal or primary effect that does not advance or inhibit religion and (3) cannot foster an excessive government entanglement with religion.

In implementing a “one size fits all” approach to Establishment Clause disputes, the Lemon Test did incredible damage to the First Amendment. Justice Neil Gorsuch pointed out that its implementation “bypassed any inquiry into the Clause’s original meaning,” “ignored longstanding precedents” and “produced only chaos.”

All nine Justices rejected application of the Lemon Test in the Boston flag case by not referring to it as a defense of the city. Justice Gorsuch then offered an analogy that every average American high schooler could grasp:

Ultimately, Lemon devolved into a kind of children’s game. Start with a Christmas scene, a menorah, or a flag. Then pick your own ‘reasonable observer’ avatar. In this game, the avatar’s default settings are lazy, uninformed about history, and not particularly inclined to legal research. His default mood is irritable. To play, expose your avatar to the display and ask for his reaction. How does he feel about it? Mind you: Don’t ask him whether the proposed display actually amounts to an establishment of religion. Just ask him if he feels it ‘endorses’ religion. If so, game over.

The Far-Reaching Impact of the Shurtleff Decision

The Shurtleff decision is unanimous affirmation that the First Amendment Free Speech Clause protects religious viewpoints. Conversely, it is a unanimous rejection of the Lemon Test, which Justice Gorsuch described as an opinion issued in a “’bygone era’ when this Court took a more freewheeling approach to interpreting legal texts.”

The Lemon Test has been a favorite weapon used by those who oppose religious symbols, display and speech. The Shurtleff case represents a historic shift in which the Court is trending to a more originalist interpretation of the Constitution.

The Shurtleff case would likely have had a different outcome during the era of judicial activist Justices. That trend began to change after the Supreme Court’s 1990 decision in Employment Division v. Smith, which weakened the Free Exercise Clause. In response to this decision, attorney Jay Sekulow and I independently began to pioneer a new approach to protect religious free exercise and speech by using the Free Speech Clause.

Whether a private display of a nativity scene, a religious symbol or speech, we gradually began winning under the Free Speech Clause. When schools censored afterschool Bible clubs or religious meetings in secondary schools and on college campuses, we won by arguing the Free Speech Clause prevents government from excluding religious speech and viewpoints. We extended these victories to the elementary school level with the Good News Club case at the Supreme Court in 2001.

Each precedent was built upon another. Collectively, these precedents began chipping away at the Lemon Test that had frequently been used against religious expression.

The amazing thing about the Shurtleff case is that the ruling was unanimous. Justice Gorsuch captures this significance when he writes: “Not a single Member of the Court seeks to defend Boston’s view that a municipal policy allowing all groups to fly their flags, secular and religious alike, would offend the Establishment Clause.”

This momentous Supreme Court decision soundly affirmed that religious viewpoints are not an orphan of the First Amendment. As Justice Kavanaugh said in his concurring opinion, “Under the Constitution, a government may not treat religious persons, religious organizations, or religious speech as second-class.”

Mat Staver serves as Senior Pastor, Founder and Chairman of Liberty Counsel. He has over 300 published legal opinions and has filed numerous briefs and argued in many federal and state courts, including three landmark cases before the U.S. Supreme Court: Shurtleff v. City of Boston, Madsen v. Women’s Health Center and McCreary County v. ACLU of Kentucky.