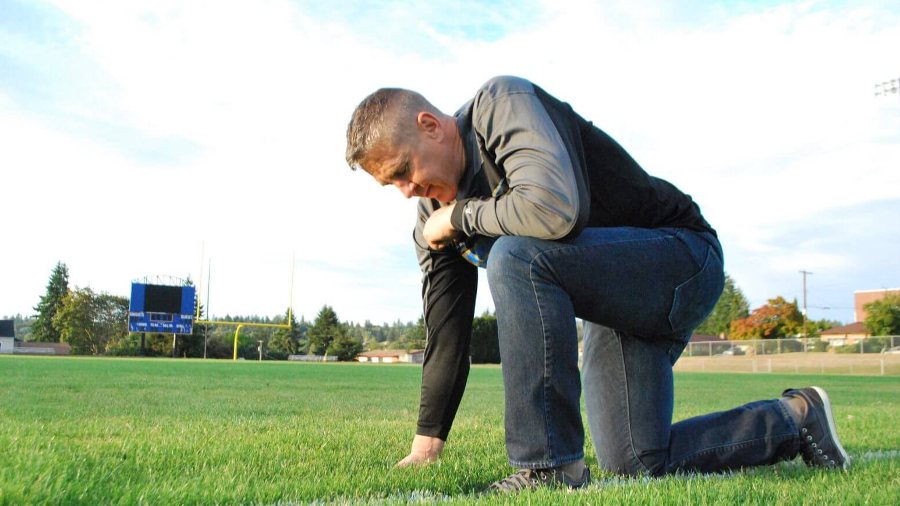 The Supreme Court is considering a new case related to school prayer. This story began in 2015 when high school football Coach Joe Kennedy got on his knee at mid-field after a game and thanked God quietly. Some of the players voluntarily joined him in this huddle.

Kennedy was fired for this act by his employer, Bremerton High School in Bremerton, Washington. He sued to get his job back.

Fox News (4/25/22) reports: “Lower courts have all ruled for the school. The 9th Circuit U.S. Court of Appeals concluded that by kneeling and praying in view of students and parents, Kennedy ‘spoke as a public employee, not as a private citizen, and his speech therefore was constitutionally unprotected.’”

Fox News quotes Rachel Laser, the president of Americans United for Separation of Church and State: “No child attending public school should have to pray to play school sports.” But his defenders note the coach was expressing his own public thanks — not forcing anyone else to participate in his prayer.

It would seem that the left cares about free speech and freedom of expression when it comes to things the founders would have never dreamed about, like alternative sexualities and gender fluidity, but not for things explicitly protected in the Constitution like the free exercise of religion.

How dare he, argued the secular authorities in the state of Washington and beyond, acknowledge Almighty God before all those students and parents and members of the community?

How dare Coach Kennedy do this in the state named after George Washington, who acknowledged Almighty God on multiple occasions — even on the day be became our first president and participated in a two-hour Christian worship service with the new government leaders of the United States at St. Paul’s Chapel, in which they received Holy Communion?

Coach Kennedy is closer to the ideals and practices of the founders than his critics who assert a false “strict separation of church and state” — words found nowhere in the Constitution.

Coach Kennedy is being represented by First Liberty Institute based in Plano, Texas, which focuses on defending religious freedom in America. Their name is derived from the fact that the first liberty listed in our nation’s Bill of Rights, the first ten amendments to the U. S. Constitution, is religious liberty.

The First Amendment begins: “Congress shall make no law respecting an establishment of religion or prohibiting the free exercise thereof.” Historically, this was understood to mean that there would be no Church of America, like there is a Church of England. That is, there was to be no Church “by law established” at the federal level. Some states at the time had state-churches.

Defenders of Coach Kennedy argue that the same men who gave us the First Amendment also gave us the Northwest Ordinance, which spells out the template that future states in the country were to follow.

They wrote in this ordinance: “Religion and morality being necessary to good government and the happiness of mankind, schools and the means of education shall forever be encouraged.” The founders did not intend schools to be “religion-free zones.”

‘Not a Separation of God and Government’

James Madison, a key architect of the Constitution, wrote a document called “Memorial and Remonstrance Against Religious Assessments” in 1785. In that document, he notes that because Christianity is of divine origin, it will stand on its own, without the aid of the state.

Whilst we assert for ourselves a freedom to embrace, to profess and to observe the Religion which we believe to be of divine origin, we cannot deny an equal freedom to those whose minds have not yet yielded to the evidence which has convinced us. If this freedom be abused, it is an offence against God, not against man: To God, therefore, not to man, must an account of it be rendered.

Just the idea of a school official bowing the knee to God — not bowing the knee to protest our national anthem, but in respect to our Creator — was enough for those on the left to try and destroy Coach Kennedy’s career and keep him from what he believes is his calling, to coach high school football.

It would seem that the left cares about free speech and freedom of expression when it comes to things the founders would have never dreamed about, like alternative sexualities and gender fluidity, but not for things explicitly protected in the Constitution like the free exercise of religion.

Coach Kennedy: From the Field to the Supreme Court