Former President Trump calls for a boycott of the majors and other big corporations buying into lies about the Georgia voter integrity law: "Don’t go back to their products until they relent." 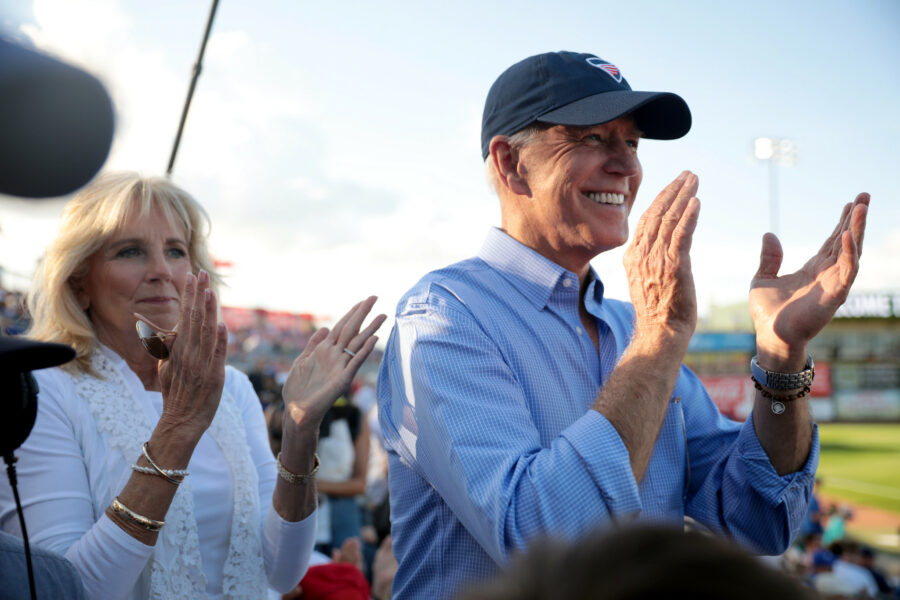 Jill and Joe Biden at a Fourth of July Iowa Cubs game at Principal Park in Des Moines, Iowa.

Major League Baseball, which managed to survive the Black Sox scandal, two World Wars, several strikes, the steroid scandal and the designated hitter, has struck out. Mighty Casey’s off the hook for biggest whiff in baseball history.

Taking its cue from Joe Biden, MLB has decided to pull this year’s All-Star game out of Atlanta because of illusionary concerns over Georgia’s new voter integrity law. Concerns that even The New York Times and Washington Post admit are bogus.

The All-Star game is scheduled to be played July 13th, 2021. Where has yet to be announced.

Here is the statement from MLB Commissioner Rob Manfred.

Over the last week, we have engaged in thoughtful conversations with clubs, former and current players, the Players Association, and The Players Alliance, among others, to listen to their views. I have decided that the best way to demonstrate our values as a sport is by relocating this year’s All-Star Game and MLB draft.”

Major League Baseball fundamentally supports voting rights for all Americans and opposes restrictions to the ballot box. In 2020, MLB became the first professional sports league to join the non-partisan Civic Alliance to help build a future in which everyone participates in shaping the United States. We proudly used our platform to encourage baseball fans and communities throughout our country to perform their civic duty and actively participate in the voting process. Fair access to voting continues to have our game’s unwavering support.

Restrictions? Georgia’s law is less restrictive than New York’s, where MLB is headquartered.

What was Manfred thinking? As former Trump advisor Steven Miller said in a tweet, league commissioner Manfred has “broken an unwritten covenant between his sport and the nation.”

With his decision to engage in ugly, angry, divisive & vengeful partisan politics (based on a web of outright lies), Commissioner Manfred has betrayed not only the fans of baseball, but the sport itself. He has broken an unwritten covenant between his sport and the nation. (5/8)

So MLB has a problem with people showing ID to vote by mail. Even though polling shows a vast majority of Americans, including minorities, strongly supporter Voter ID laws.

Strange. As Fox News observed, MLB has no problem forcing people to show ID when picking up All-Star Game tickets at will-call. Yes, knowing who is going to sit in a stadium to watch a game is far more important than knowing whether somebody is legally casting a vote.

Adding to baseball’s complete hypocrisy? The move by Commissioner Manfred comes just days after MLB extended an agreement with the giant Chinese media company Tencent. This is the same media company that smacked down the NBA after a general manager showed support for Hong Kong. It is the same China that not only rejects democracy, but currently enslaves a portion of its population.

We know whose dugout Manfred is sitting in. Last year MLB allowed kneeling for the national anthem. Now they are bowing to the Chinese and anti-American woke.

MLB made this decision a day after Joe Biden went on ESPN to lend his support to radical calls to pull the All-Star Game out of Georgia. Remember when presidents threw out the first pitch on Opening Day? Biden’s throwing out the whole sport.

The issue causing all the real heat is requiring Voter ID on mail-in ballots. This is called “racist” by the same people who lied about a water main break shutting down counting in Georgia. It’s called “Jim Crow on steroids” by the same president who counts Klansmen and segregationists among his dear friends, and whose own VP suggested he was a racist barely a year ago. The same president who suggested you’re not really black if you think for yourself and vote for someone other than him.

Of course, Biden loved the lack of voter ID in Georgia (and elsewhere). How else do you think he “won” Georgia? If it weren’t for the absence of ID and other controls on the mass of mail-in ballots Democrats corruptly engineered to fix the election, he’d be on a beach in Delaware, not wandering the halls of the White House.

But for Joe Biden to interfere with the will of the Georgia people as expressed through their elected government? To call for MLB to hurt the people of Atlanta? To politicize our National Pastime? Shame. It’s yet another Biden decision that hurts America and Americans.

Think closely about what Biden said when he called the Georgia bill “Jim Crow on steroids.” He is saying a law requiring people to demonstrate who they are before they cast a vote is multiple times worse than blowing up black churches, blasting protesters with water cannons and blocking kids from schools. (Funny, since he’s also helping block kids from going back to school, particularly poor minority children whose parents can’t afford other options.)

Then there’s Biden’s unprecedented decision to call for a boycott of a state whose elected representatives passed a law he doesn’t like. Mollie Hemingway thinks there are questions Biden must answer. I’ll add another one. “Now that you’ve targeted baseball, is there any sacred American institution you and your progressive handlers won’t target?” Watch out, apple pie. You’re next.

Former President Trump has had enough. He is furious at MLB and corporations like Delta and Coca-Cola that are ignoring the truth of the Georgia law, and twisting the state’s arm over it.

On Friday night, he called for a widespread boycott of the majors, Delta, Coke and other woke entities screwing with Georgia. (Incidentally, this is the same Coca-Cola that recently was training its employees to be “less white.”)

“For years the Radical Left Democrats have played dirty by boycotting products when anything from that company is done or stated in any way that offends them,” Trump said in a statement issued by his Save America PAC. “Now they are going big time with WOKE CANCEL CULTURE and our sacred elections.”

“It is finally time for Republicans and Conservatives to fight back — we have more people than they do — by far!  Boycott Major League Baseball, Coca-Cola, Delta Airlines, JPMorgan Chase, ViacomCBS, Citigroup, Cisco, UPS, and Merck. Don’t go back to their products until they relent. We can play the game better than them.”

Speaking of playing the game, perhaps Trump can do something in the affirmative in addition to calling for the boycott. He said last week he’s thinking about doing rallies again. How about a rally in Georgia to help make up for the lost revenue? Better still, a charity baseball game in Hot ‘lanta on July 13.

To paraphrase Field of Dreams, such a game could remind us of “what was good and could be good again.”