... And why praying for him is the right decision. 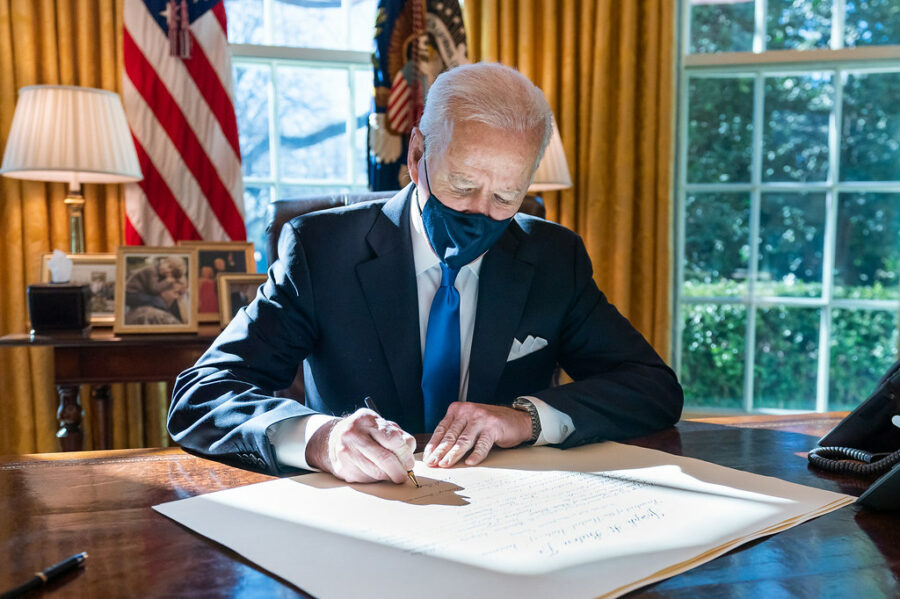 President Joe Biden signs a commission for Gina Raimondo as Secretary of Commerce Wednesday, March 3, 2021, in the Oval Office of the White House.

Does anything better symbolize the first two months of the Biden Administration … oops, Biden-Harris Administration … than the pile of doo-doo deposited by one of Joe’s dogs on the White House carpet?

Yes, that mound of mess was actual “news” Wednesday. But it doesn’t stink nearly as much as the actions of the new White House occupants.

Really. By golly, I want our country to work. I pray for our country, and I hope you do, too. Fervently. But can you name one thing Joe Biden has done that has gone right or done right by the American people?

“But Al, he sent us $1,400!” Yes, as part of a partisan COVID-relief boondoggle that had little to do with COVID and leaves a debt burden on your kids, grandkids, great-grandkids, and generations beyond. Besides, he had promised $2,000. So if your highlight of the Biden Administration is a broken campaign promise, you’re already in trouble.

Start with personnel. Who’s Biden picked to help run our country? Any aces on his pitching staff?

Kamala Harris? If you ask her about the harm from lockdowns, she cackles. Ask her if she’s going to the border, she cackles. So naturally Biden decided to put her in charge of the response at the border. The same woman who compared ICE agents to the KKK.

How about National Security Advisor Jake Sullivan? He’s only the guy who came up with the idea of pretending Trump was colluding with Russia, to divert attention away from Hillary’s email scandal. And as a stunning new article from National Pulse points out, he’s neck deep in ties to Chinese Communist-linked entities.

Or Susan Rice. She only lied her face off about a terrorist attack that killed four Americans, including U.S. Ambassador Christopher Stevens. Pretended it was a spontaneous reaction to a video nobody saw, rather than a planned, coordinated assault by the radical Islamists Obama-Biden-Clinton had previously armed in Libya. She also lied about her involvement in unmasking Gen. Michael Flynn as part of the fake Russia witch hunt. Said she knew nothing about it. Now Biden is putting her in charge of expanding mail-in voting. Yeah. When you think voting “integrity,” you think “Susan Rice.”

Even More Personnel? Yes, Even More

Or HHS Secretary Xavier Becerra. His top connection to “health” is doing everything in his power to ensure millions of unborn get slaughtered before taking their first breath. Also on his resume is his attempt to imprison the journalists who exposed Planned Parenthood’s baby part selling operation. Compare that to when Trump simply mocked CNN’s Jim Acosta, and they called it an assault on a free press.

Then there’s Becerra’s deputy. Dr. Rachel Levine. Oh, I’m not griping that Dr. Levine is transgender. But I’d trust Bruce/Caitlyn Jenner in the job more than Levine. Jenner is a champion, a successful entrepreneur/business owner, a conservative. And unlike Levine, Jenner is not stupid enough to stuff elderly COVID patients back in nursing homes. Nor would Jenner be callous enough to pull Momma Jenner out of her nursing home before subjecting everyone else’s mother there to a terrible, lonely death.

And yet Joe Biden thought Levine was fit for the second highest position in Health and Human Services.

How about Secretary of Transportation Pete Buttigieg. See the latest with him? He was caught yesterday staging a photo op. He had a government SUV drive him close to his destination. Then he pulls out a bike to ride the rest of the way to pretend he’s Mr. Clean Energy.

Mayor Pete, secretary of Travel, taking his armored up gas guzzling suv just short of his destination so he can ride in on a bicycle for the photo op. They don’t even try because everything that comes across our screens is staged and filtered. pic.twitter.com/L6WLmFd3zK

Let’s not even start with Press Secretary Jen Psaki. Or shall we say we’ll “circle back” to her later?

I could go on all day. But tell me, can you name one Biden selection that really impresses? I mean, Biden couldn’t even pick out a White House dog without ending up with Cujo. (Sorry, Major. I know it’s not your fault.)

Another ace was Richard Torres-Estrada. He openly loathes former Commander-in-Chief Donald Trump. Compared him to Hitler. So naturally, he was hired as a “diversity & inclusion” officer for U.S. Special Forces Command. Thankfully, after an outcry, he was reassigned.

The very position tells you where Biden’s head is at. He doesn’t want America’s special forces to be the best of the best. The most lethal military units on the planet defending the United States of America. He wants the United Colors of Benetton. China, Iran and Russia cannot believe their good fortune.

This lack of interest in America’s defense is seen in the Defense Department’s stand-down in order to weed out supposed “extremists.” Oh, Biden’s decidedly not looking for anyone sympathetic to the BLM/Antifa rioters who burned, looted and murdered their way across America last summer. He’s not looking for the next Nidal Hassan, the Muslim extremist killed 13 fellow soldiers at Ft. Hood. No, he’s only looking for “domestic extremists” … which the Biden-Harris administration now calls white Trump supporters.

Decisions About Family and Energy

What about some of Biden’s other decisions?

Championing efforts to encase in law the fraud-friendly practices that put him in office, including openly lying about the Georgia election law to the point that even the Washington Post gave him four pinocchios. Thus wrecking America’s election system. (P.S.: Jen Psaki doubled down on the lie Thursday)

Proposing to jack up corporate taxes to pay for a multi-trillion dollar “infrastructure” bill that even the White House admits has very little to do with infrastructure. Thus wrecking the economy.

Dishonestly comparing the Senate filibuster to “Jim Crow” and giving support to the move to eliminate the filibuster. If the Democrats can ditch the filibuster, here comes statehood for Puerto Rico and D.C., a packed Supreme Court and one-party dictatorial rule. Thus wrecking the United States of America.

Again, I could go on all day. Again, give me one thing Biden’s done that will actually help America or Americans.

I’m tempted to say Biden’s every action is designed to help everyone but Americans and America. But then I look at the border. There you find the inevitable, disastrous result of his decisions to reverse course on securing the border, his promise of health care for illegal immigrants, his open invitation to illegals, and his particular promise not to reject unaccompanied minors.

Yes, Americans are injured in countless ways by the surge of illegal immigration Biden has wrought. But so are the innocent children sent north in the clutches of the coyotes and cartels.

Where is Joe’s heart for the three-year-old and five-year old abandoned, tossed over the border wall? Or the 6-month old hurled into the Rio Grande by those fiends? Or the migrant girl drowned?

Then there’s the kids stacked up in Biden’s Bins. Or bundled into encampments under bridges. All as a direct result of his decisions.

Oh, if only he had as much hostility towards the coyotes as he does for Trump supporters. Oh, if he only had as much heart for the victims of his policies as he does the globalists and America-loathing progressives he now serves.

For the “80 million” we’re told voted for Joe Biden, you’ve now had 10 weeks to see his decisions at work. As the suffering grows by the hour, are you yet regretting your decision?

But Here’s the Rub

But here’s the rub. While all the above may make you want to throw Joe Biden over a wall or have Major nip him on the kneecap, we cannot celebrate Easter without believing in the turnaround, the reversal, the changing of direction. Death itself did a 180 Easter morning, is it out of God’s power to turn the course of a nation, or the decision-making of one man? Think of Peter. One day he’s denying knowing Jesus. Days later he’s risking death for Jesus. Think of Paul. One day he’s helping stone the Apostle Stephen. Soon he’s calling himself an apostle.

Joe Biden has not yet made tomorrow’s decisions. That is why we are called on to pray for him today. The power that rolled away that stone can certainly move a president’s pen.