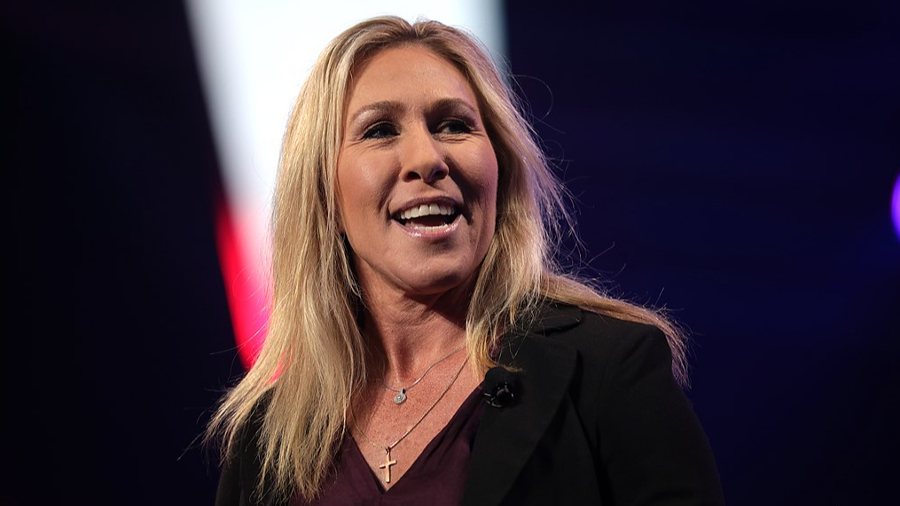 My favorite member of Congress reminds me of my favorite Christian saint: Joan of Arc, who said while Church authorities were trying her as a witch, “I am not afraid. I was born for this.”

Nor is Rep. Marjorie Taylor Greene afraid of the U.S. Catholic bishops, who nod and smile and offer infanticide advocate Joe Biden the Body and Blood of Christ. They can’t take anything from her that they haven’t already stolen. Her trust in the church where she grew up, got married, and wanted to raise her children — all that is gone. Gone not just for Taylor Greene, but for four out of ten native-born U.S. Catholics. That is the percentage of homegrown U.S. Catholics who leave the church and never return, according to Pew Research.

They’re fleeing the bungled sex scandal that saw thousands of child victims. They’re shunning the lukewarm drool that too many hear from the pulpit on Sundays. They’re shrugging at the vapid platitudes of “social justice and tolerance” offered their kids in most Catholic schools — a growing number of which are embracing LGBTQMYNAMEISLEGION ideology.

Are Up to Half of U.S. Priests Really Gay?

But that’s not too surprising, since the ratio of homosexual priests is somewhere between 15% and 50% — compared to … 2% of men as a whole. No wonder we never, never hear about sexual sins from the pulpit. It might get good priests persecuted by their less faithful brethren.

And what is the bishops’ response? To call for more Latino immigrants, legal or not, to briefly warm the pews until they too flee for the hills. (For the first time in history, not even half of U.S. Latinos claim to be Catholic.) Of course, the main appeal of such Latinos to our bishops is that they’re disempowered newcomers, unlikely to complain. They also come trailing long strings of cash: Some 40% of the U.S. Conference of Catholic Bishops’ budget comes from federal non-profit contracts, mostly for processing immigrants (legal or illegal). As I wrote here years ago, our shepherds have given up on American Catholics, and decided to replace us with imports.

No wonder the bishops denounced every effort of the Trump administration to impose law, order, and safety at our borders. He was threatening their cash cow. Where else would they get the money to pay for sex abuse settlements?

Another Sheep Lost by the Hirelings

Marjorie Taylor Greene talked about all these scandals in a winning interview with truth-telling Catholic journalist Michael Voris. She attributed the bishops’ systemic coverup of child sex abuse, apparent apathy over abortion, and embrace of human trafficking to … Satan. And she said that as much as it grieved her, she couldn’t as a mother trust her kids around priests whose bishops for so long protected perverts. So she’d moved to another, evangelical church.

All that roused an old, toothless bulldog from his snoring on a long, rusty chain to growl at her. William Donahue runs the tiny, forgotten pressure group the Catholic League for Civil and Religious Rights. A liberal comedian once mocked Donahue as “One guy, with a computer.” Donahue spent much of the 2000s bullying and gaslighting parents of sex abuse victims, inquisitive journalists, and others probing the systemic coverup of sex crimes against kids by recidivist Catholic priests.

Donahue is an old-school Irish ward politician — albeit a lace-curtain one, since he pays himself over $1 million per year, some 40% of the League’s entire budget. He thinks that one thuggish threat can silence troublemakers. So he denounced Taylor Greene as “a disgrace” for sharing her loss of faith, and demanded that GOP house leader Kevin McCarthy discipline her.

Of course, Kevin McCarthy has less moral authority right now than Harvey Weinstein, so Greene has no need to worry.

The Learned Helplessness of the Catholic Layman

But I want to speak up and thank Rep. Greene for voicing the outrage, exhaustion, and grief we Catholics share — and are absolutely powerless to do anything about. Indeed, “learned helplessness” seems to be the state that our bishops wish to cultivate among us.

As I told evangelical activist Bunni Pounds, one reason so many Catholics throw ourselves into the pro-life movement is … we have absolutely no power to change anything at all in our church. So we put our energy into an issue most bishops don’t care about, and can’t control.

Talk to the Hand, You Serfs

I speak from long, bitter experience. At age 16, I reported that the religion teachers at the Catholic high school my father helped to build were scoffing at the virginity of Mary and the Resurrection of Jesus. So I was told to “find another school” by the principal. The bishop didn’t even bother answering my letter of complaint. The school chaplain laughed at me, and later taunted me about the contents of my confessions in front of some teachers. (He should have been excommunicated for that, but as it turned out, he’d be removed for molesting teenagers.)

I found a lawyer and threatened to sue. They let me graduate in peace.

What we as Catholics have come to see over 20 years of drip, drip, drip revelations since 2002 was this: The bishops care about their financial bottom lines first, their reputations second, their fellow priests third, and the souls of mere laymen … barely at all. How else to explain the shell game so many bishops played, moving abusers from parish to parish and buying victims’ silence? Why else did they exempt bishops from penalties for shuffling abusers in 2002? It didn’t help that the head of the U.S. Catholic bishops at the time, Theodore McCarrick, had himself molested a boy for many years.

Satan, the Father of Lies

As a lifelong, zealous Catholic, I simply cannot wrap my head around these things. If they’re not from Satan, Mr. Donahue, where would you say they come from? From Christ?

Author Joseph Sciambra fell into the gay lifestyle after being molested by a priest while still a teenager. Some 20 years later, he repented, and returned to the church — only to find one priest after another “affirming” the sin he was desperate to renounce. After years of trying to find any Catholic bishop willing to correct this, he joined the Eastern Orthodox church as a spiritual refuge. Sciambra told me:

In recent months, the term “grooming” has emerged as an oft-used remark on social media in relation to the mislabeled “Don’t Say Gay Bill” in Florida which attempts to discourage public school teachers from having classroom discussions about sexual orientation with children.

But such conversations have been taking place in the Catholic Church for decades – usually under the guise of spiritual direction offered by priests. This has been part of the grooming process; but in Catholicism such grooming is also a form of indoctrination.

Because, in terms of LGBTQ theory, a number of Catholic priests – particularly the Jesuits – expound the false dogma that someone is born gay and or even made that way by God. At this point, some predatory priests co-opt God in their plans for manipulation and abuse of the vulnerable.

Is Perversion a Birthright?

The central lie sold us by Caesar, Mammon, and Sodom, is that sexual passions are not a moral challenge but a birthright. We must affirm, support, and welcome every perversion as part of “diversity” and silence critics as “haters.” Cultivating teen boys is not an aberration but a core element of gay male culture. In his 30s, gay liberation icon Harvey Milk had an underage boyfriend. For how long will “minor-attracted persons” remain excluded from the Rainbow Coalition?

If the confirmation of pedophile advocate Judge Ketanji Brown Jackson to the U.S. Supreme Court is any indicator, not long. And too many of our bishops will react to that development with a sigh of relief. It might spare them some legal fees.