Raiding a Pro-Lifer’s Home: The Sexual State Cracks Down on Dissidents 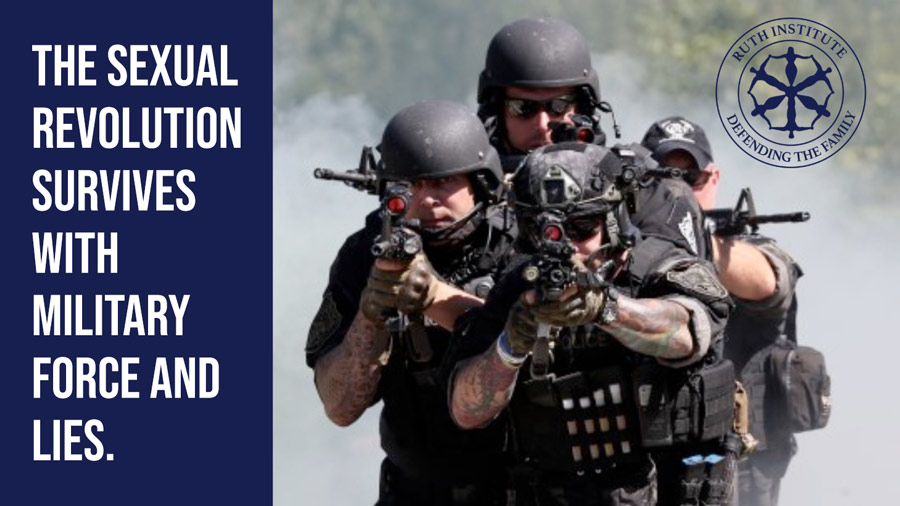 Update: Life News reports yet another pro-life activist has had his home raided by the FBI. Last year, Chet Gallagher and a group of others prayed and sang in the hallway of office building that contains the Carefem abortion facility in Mt. Juliet, Tennessee. According to Life News, the event was so peaceful the group was released by local cops with minor trespassing charges. A year later, the Feds are banging on his door.

“The power of the state has been captured by the Sexual Revolutionary ideologues,” Morse said. “The Biden Administration has ignored arson and vandalism against churches and pro-life pregnancy centers, while terrorizing a pro-life father for a year-old incident that had already been thrown out of court. The Sexual Revolutionaries are counting on the might of the State to prop up their irrational and inhumane ideology.”

“It was like something out of a World War II movie, with the Gestapo sweeping down on the regime’s opponents. With guns drawn, an FBI SWAT team descended on the Houck home in an early-morning raid that terrified his wife and seven children.”

“What the Houck family experienced is typical of the Sexual State, which relies on violence and intimidation to enforce its agenda. The FBI could have simply asked Houck to surrender himself, which – as a law-abiding citizen – he most certainly would have done. Instead, the Bureau engaged in this drama meant to terrify a family and scare the pro-life community.”

Morse noted the disparity in treatment of opposing sides in the abortion debate.

The Department of Injustice

“Churches and pro-life centers are vandalized, and Attorney General Merrick Garland yawns,” Morse charged. “The homes of Supreme Court Justices are picketed, in clear violation of federal law, and the DOJ does nothing.”

The Houck arrest stems from an incident in which he and his 12-year-old son were part of a prayer vigil at a Philadelphia abortion clinic. When a clinic escort got in the face of the boy, shouting obscenities, Houck pushed him away. A civil suit by the “escort” was dismissed by a Philadelphia District Court.

“But that didn’t deter the FBI, which charged Houck with violating the Freedom of Access to Clinic Entrances Act.” Morse said. “Garland’s DOJ has launched a full-scale attack on those the president calls advocates of ‘semi-fascism.’ This isn’t law enforcement or the equal administration of justice but a vendetta against the administration’s opponents.”

Morse explained: “The Sexual State isn’t reason or eloquence. It is brute force. It’s like a steamroller crushing everything in its path. We saw it in the way parents protesting the transgender indoctrination of their children were treated. And don’t forget, the DOJ investigated these school-committee protests as possible incidents of domestic terrorism.”

Morse predicted: “The persecution of the Houck family will have the opposite of the intended effect. Opponents of the Sexual State will not be cowed or silenced.”

“Sharing My Story Is Offensive.”

Because Byblow experienced same sex attraction, he says, “I settled for the horrid idea that this is who I am and this is who I forever will be, which is an idea that comes from the pits of hell … . I entered into the despair of thinking this means I’ll never become a husband and father. I had to give up that dream … but now I know pursuing holiness can bring about anything, including holy attraction to someone of the opposite sex.”

Learn about Byblow’s journey of a tumultuous, gender-confused childhood, to his promiscuous teen years in order to gain the affirmation he craved from men. “I felt like the king of the castle in the secular world, but in my heart I was empty.”

In his early twenties, he “deadened” himself and his heart became hardened from entering further and further into sin. “I cared less and less and less. That’s all rooted in the spiral of despair… I hated myself.”

Later, his pursuit of truth led him to visit a church, where he found men who radiated peace, love, and joy. “I wanted that!” he said. “There’s a distinction between happiness in the moment and joy.” He had been seeking temporary happiness that never brought him real joy.

“I eventually surrendered to Jesus, and let me tell you, that was amazing. That’s what brought my dead, hardened heart back to life.”

However, “My mere existence and sharing my story is actually offensive to some people who are invested in LGBT ideology. So, what, are we just going to shut up and not share our stories? No. Are we going to wait until everybody in the whole won’t be offended? No. Are we trying to offend people? Also no.”

The reality is this: “Just because you have same sex feelings, doesn’t mean you’re gay. It could just be a deep desire for friendship.”

Hear Byblow’s full story as well as his advice on what to do if your child tells you he’s gay. Watch it here.

What happens when a survivor reports abuse to law enforcement? What questions will be asked? What else can one expect to happen?

While each police department may operate a little differently, I want to walk you through what to generally expect when preparing to report sexual abuse to law enforcement.

The decision to come forward and notify law enforcement about sexual abuse is not an easy one to make. However, it’s one that can oftentimes make a world of difference in a survivor’s recovery. Reporting abuse can be empowering. It can also help bring about justice. This can be incredibly healing for a survivor.

Freeze Your Eggs: The Worst Advice Ever