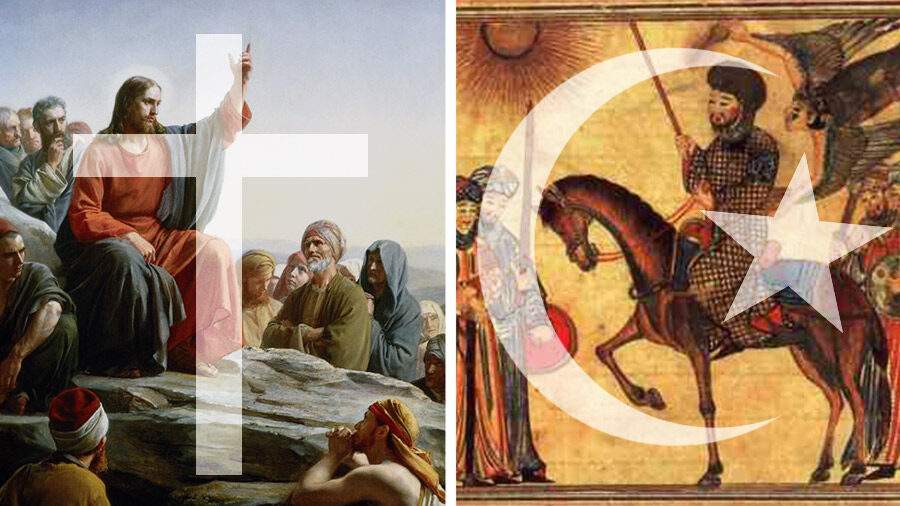 “Show me just what Mohammed brought that was new, and there you will find things only evil and inhuman, such as his command to spread by the sword the faith he preached.”

In certain respects, this is the sentence that Pope Benedict XVI will be remembered for. And while those who cite it do so to disparage and dishonor his memory — to portray him as an “Islamophobe” — that notorious assertion is of profound significance.

An Assertion Based on Knowledge and Experience

Pope Benedict read the above assertion on Sept. 12, 2006, during his Regensburg address on faith and reason. He was quoting Eastern Roman (or “Byzantine”) Emperor Manuel II Palaiologos (b. 1350). An erudite and pious man, Manuel knew much about Islam, both abstractly and experientially.

In 1390, Manuel’s father, John V, became a vassal of the Ottomans and sent Manuel as a hostage to their sultan, Bayezid I (1360-1403). The contemporary chronicler Doukas described Bayezid as

a feared man, precipitate in deeds of war, a persecutor of Christians as no other around him, and in the religion of the Arabs [Islam] a most ardent disciple of Muhammad, whose unlawful commandments were observed to the utmost, never sleeping, spending his nights contriving intrigues and machinations against the rational flock of Christ. … His purpose was to increase the nation of the Prophet and to decrease that of the Romans. Many cities and provinces did he add to the dominion of the Muslims.

Unsurprisingly, the sultan never seemed to miss an opportunity to humiliate the heir apparent of Constantinople. Bayezid even sadistically forced Manuel to accompany the Turks and witness the final destruction of Philadelphia, the last Christian bastion in Asia Minor. The “sight of destroyed Christian cities” produced much “intense suffering” and even “sickened” the prince, writes one historian.

One year later, in 1391, Emperor John V died, and his son, Manuel, became emperor — after escaping from the sultan’s court to Constantinople. It was not long before Bayezid declared a fresh jihad, put Constantinople to siege (1394-1402), and once again began slaughtering Christians.

Earlier, during his time with the Turks, Manuel had regularly debated religion with Muslims. It was then that he said to a learned Muslim, “Show me just what Mohammed brought that was new, and there you will find things only evil and inhuman, such as his command to spread by the sword the faith he preached.”

God is Rational. The Teachings of Muhammad Were Not

As inflammatory as this sentence may be to modern sensibilities — and despite all the criticism Benedict received for quoting it — it is hard to gainsay it. The jihad promulgated by the Muslim prophet has led to the slaughter of millions and brutal conquest of much of the earth’s surface, including some three-fourths of what was once the Christian world. The Middle East and North Africa — like Constantinople, now Istanbul — were more Christian than Europe until the sword of jihad Islamized them.

Indeed, almost as if they were seeking to validate the claim that Muhammad had only taught “evil and inhuman” things, when Benedict quoted this assertion, anti-Christian riots erupted around the Muslim world, churches were set aflame, and an Italian nun who had devoted her life to serving the sick and needy of Somalia was murdered there.

Be that as it may. This is not the place to document the veracity of Manuel’s statement — I have already written two books that fulfill that purpose — but rather to get to the emperor’s point. Which was theological: God is rational — indeed, as the Logos, the very embodiment of rationalism — whereas the teachings of Muhammad were not. This comes out clearly in Manuel’s own words on the three options Islam offers non-Muslims:

[1] they must place themselves under this law [sharia, meaning become Muslims], or [2] pay tribute and, more, be reduced to slavery [an accurate depiction of jizya and dhimmi status], or, in the absence of either, [3] be struck without hesitation with iron.

Manuel argued that these three options are “extremely absurd,” irrational, and therefore unbecoming of the Supreme Deity. For example, if being a non-Muslim is so bad, why would God allow money, jizya, to “buy the opportunity to lead an impious life”? Clearly these are self-serving and man-made rules, designed to empower one group (or tribe) against another.

Manuel went on to say:

God is not pleased by blood — and not acting reasonably [σὺν λόγω, ‘with logic’] is contrary to God’s nature. Faith is born of the soul, not the body. Whoever would lead someone to faith needs the ability to speak well and to reason properly, without violence and threats… . To convince a reasonable soul, one does not need a strong arm, or weapons of any kind, or any other means of threatening a person with death.

The Importance of Reason and Its Compatibility With Faith

Benedict had quoted all of this less to defame Islam than to argue for the importance of reason, and its compatibility with faith — both of which are under assault today more than ever (as when a society cannot tell the difference between men and women).

As for Islam — which is inherently irrational — Benedict had closed his address with:

Not to act reasonably, not to act with logos, is contrary to the nature of God, said Manuel II, according to his Christian understanding of God, in response to his Persian interlocutor. It is to this great logos, to this breadth of reason, that we invite our partners in the dialogue of cultures.

Here, one cannot help but remark how utterly different Pope Benedict and his successor, Pope Francis, are in their approaches to Islam. Whereas Benedict knew that without agreement on a first premise — namely, the (rational) nature of God — “dialogue” with Muslims would achieve nothing, Francis has become the champion of dialogue, and all apparently for show — rationalism and reality be damned.

Raymond Ibrahim, author of Defenders of the West: The Christian Heroes Who Stood Against Islam and Sword and Scimitar, is a Shillman Fellow at the David Horowitz Freedom Center, a Judith Rosen Friedman Fellow at the Middle East Forum, and a Distinguished Senior Fellow at the Gatestone Institute.

Islam Portrays Jesus as a Terrorist