Pastors’ Corner: What to Say and Do When the Same-Sex Couple Shows Up at Church 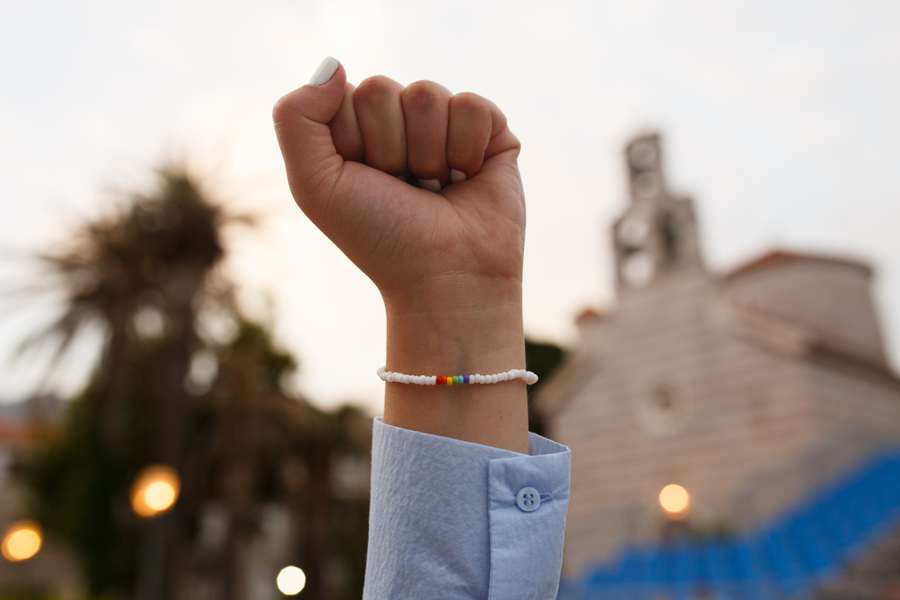 The same-sex couple walks in your church door. This could go a thousand different directions. I wrote last time of your church’s responsibility to love them with the love of Christ, cautious not to let them try to redefine what His love looks like. Today I conclude with specific, practical ideas on what to say and do.

What’s the best, first way to show God’s love? With a warm, genuine smile — unless and until they reveal they’ve come to disrupt or derail your church’s worship service, or to debate or protest your teachings. If that’s why they’ve come, you can smile or you can scowl. Either way, I hope you have a security team you can call on to help, because you don’t need them staying there to do that.

Let’s suppose it goes better than that. You extend them a warm greeting, and they greet you back. That gets you through the first few seconds. It’s a start, but only a start. And you have a problem: They’re standing there holding hands. Don’t underestimate the issue that represents.

I spent a summer in China some 30 years ago, where I discovered it was perfectly ordinary for male friends to hold hands in public. I had a very uncomfortable walk across Tian An Men Square one day, holding hands with a Chinese friend. I survived the experience, knowing it didn’t mean anything wrong there. But it does mean something when two men hold hands here.

Know Where You Draw the Line

Maybe you think it’s just some tame, almost-innocent level of same-sex romance they’re displaying. Maybe you think it’s better not to make a big deal over it. I say, Sure, go ahead and ignore it. Ignore it as you would if some guy took off with half the money in the offering plate. And did it in plain view, where everyone could see what he was doing. And tried to persuade the whole church, “Thievery is an acceptable ‘lifestyle.’”

If you think you’d let that pass by with a wink and a nod, then you can ignore the hand-holding, too. Don’t expect anyone in your church to take sin seriously after that, though.

Clearly you have to do something. Opinions vary on what that “something” is.

And When You’ll Draw It

Some churches won’t allow known homosexuals to enter at all. I agree it’s right to take a hard line, as I am no fan of wrong going on in church. I draw it in a slightly different place, though as you’ll see below.

Some churches may prefer to go softer on it to start with. “We’ll ignore it the first time, and deal with it next time they come back.” But it isn’t one bit easier, gentler, or kinder to say it “next time” than the first time. If you act as if it’s okay the today, you’ll only surprise them all the more when you tell them it’s wrong next Sunday.

I suspect some churches put it off for “next time” because they’re hoping there won’t be a “next time.” They think by putting off the messy confrontation they can escape it altogether. I don’t think much of that policy. If its cowardice doesn’t bother you, consider the confusion it creates. There’s no better way to send your church a mixed message on right and wrong than by letting a bad example be set publicly, unmentioned, unhindered. That’s bad teaching, and it’s bad policy.

You do need a policy, by the way. Your ministerial leadership team had better work it out, record it, agree on it, and pass it along to ushers and greeters. Don’t leave them without a map or a compass. These are leadership decisions, not usher/greeter decisions.

If your church’s policy is, “No admittance to homosexuals,” your greeter at the door knows exactly what to do: Turn them away. The simplicity doesn’t make it right, however. You run the risk of running someone off who’s genuinely there to seek Christ.

That’s why I recommend you draw a hard line, but draw it somewhere else: Let the persons in, but not the behavior. Simply tell them your church has a policy that there will be no display of same-sex affection here.

Let the persons in, but not the behavior. Simply tell them your church has a policy that there will be no display of same-sex affection here.

I do mean, tell them simply. It need not be any more dramatic than that. It need not even be awkward. You have the right to set policy and the right to communicate it. Do tell them quietly, of course, off to the side, if you can. There’s no need to escalate it by making it more public than it has to be.

If your church has decided, “Yes, we’ll tell them that, but not until they’ve come back the second or third time,” be aware you’ll still have to lay down the law, but now it really could get awkward: “Yes, yes, we allowed it last week, but you’re going to have to stop it now.” If that sounds rough to you, then you’ve just discovered another reason I don’t like putting it off that way. At least do them the courtesy of telling them somewhere else before they show up at church again.

If They Push Back

They may respect your request. They might even enter in and begin a life-changing journey toward Christ. It can happen, so don’t close the door on it. Or they might give you pushback. This is what makes this so unpredictable.

“What?” they might object. “Why can’t we hold hands here?” I could imagine that being a perfectly genuine question, where they just want to know. If so, they deserve a genuine answer — later. I doubt they’d be satisfied with any short answer you might give, and with church about to start, you don’t have time to give them a long answer.

So I would say, “That’s a fair question, but church is about to start. Would you mind simply respecting our request for now? We’ll find you a chance to talk with one of our pastors or teachers about it later.”

If they won’t respect a request like that, they’ve come for some reason other than church. You need not let anyone browbeat you into thinking you must answer, and must answer right now.

What If They Get Belligerent?

The greeter at the door might not be the right person to answer anyway. I believe every Christian should know the truth about marriage and morality, but I do not expect everyone to be good at articulating it under fire. That takes specials skills, skills that shouldn’t have to be part of a greeter’s job qualifications. There’s absolutely nothing wrong with saying, “Our church has its convictions, I understand them, I agree with them, but I’m not the best person to explain them.”

If they get belligerent over it, I return to my earlier answer: I hope you have a security team you can call on, and I  hope that team is well trained for the job they have to do. But now we’re getting beyond the scope of this article.

Can Good Come of This?

I’ve kept this focused on one limited scenario: What to do when the same-sex couple walks in the door. Things can go bad in a moment. Your church could set policies and make plans for it the right way, in advance, when the pressure isn’t on. Or you could let your greeters make up an answer on the spot. Don’t put them in that position, okay?

I close with an important final question: Can good come of all this? Of course it can! God is always at work. Consider the bystanders watching as this goes down. When my son, Jonathan, was in high school, he and his atheist classmate Jason debated religion almost every day. The year after they graduated, Jonathan heard from another classmate who had just accepted Christ — and one reason for his decision was seeing how Jonathan had handled those debates.

Likewise, someone will probably be watching the way you greet the same-sex couple at your door. By God’s grace, they may learn something new about His truth and love from it. And only God knows what He has in store for the two visitors who started the whole thing going, as long as you love them with His love and speak to them with His truth.

It isn’t only about “holding hands” — these principles apply to a variety of similar situations. Download the shareable, reproducible 3-part PDF, When the Same-Sex Couple Comes to Your Church, including this article plus foundational principles published previously.

Pastors’ Corner: Don’t Be Caught Off Guard When the Same-Sex Couple Shows Up at Your Church

Pastors’ Corner on Sex, Sexuality, and Transgender: Got Questions?

The Stream on Homosexuality and Transgender Issues: A Summary of Our Work So Far