Pastors’ Corner: If, When, and How to Welcome the Same-Sex Couple or Trans Person at Your Church 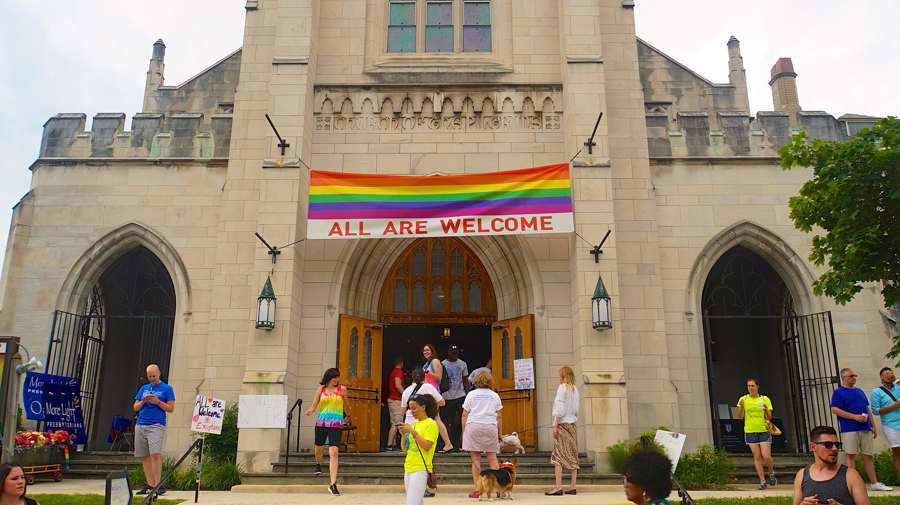 The fight has just ratcheted up again, and here’s a good first clue into how the left is going to fight it. “All are welcome – no exceptions.” An entire denomination paraded that message on church banners and web pages, not long ago. Between the lines it read, “We’re better Christians than all those fake churches that keep gays out.” A gay friend of mine says any church that doesn’t accept gays has unchristian theology: We’ve forgotten that God is love.

Is it true? How do we treat the same-sex couple, the trans person, the Q, whatever “Q” means? Do we welcome everyone? If so, how, and to what extent? If not, how do we square that with the love of God? Maybe your church has thought through all this. If not, be prepared for an explosion. It’s coming. Because it isn’t just some churches saying we should accept gays. It’s practically our whole culture.

I’ll say this much for “gay Christian” theology: They’re right to say it depends on our view of God. If the rest of it were right — if God’s love were the one important thing to know about Him — then their conclusion might be right, too, and we should freely invite homosexuals and homosexuality into our churches. Except it isn’t right. In fact there’s another error in that conclusion, one you might not even have noticed. It’s the word “our,” as in, “our churches.”

Whose Church Is It?

If it’s your church, go right ahead. Feel free to do what you want with it. If on the other hand it’s Jesus’ church, then He’s in charge, and we’d better let Him decide what goes and doesn’t go. I don’t mean it’s wrong to talk about “our church,” any more than it’s wrong for a child to talk about “our family.” Just remember you’re talking about membership, not ownership. It’s Jesus’ church. He is the host, and we are the invited guests — all of us.

So if you invite a person to your church, you’re actually asking him to come along with you as a fellow guest in the Lord’s house. It’s His, so He gets to set the rules, including who He invites and who He welcomes in. Pastors and other leaders need to know and administer His standards on His behalf, as He has delegated them that responsibility. Still, it is His rules that they administer.

That relieves some of the pressure, if you ask me. We don’t have to answer for our churches’ standards, as if we made them up ourselves. That’s on God Himself, who answers when He decides to answer. We do need to be able to explain these standards, however. Because people will ask the “why” questions, and God has indeed given an answer. A refreshingly clear one, even.

Here’s the short version: It’s Jesus’ house. Everyone is invited, period. Everyone is welcome — on Jesus’ terms. If anyone tries to come on his own terms instead, why think Jesus should welcome them there?

It’s Jesus’ house. Everyone is invited, period. Everyone is welcome — on Jesus’ terms. If anyone tries to come on their terms instead, why should they even think Jesus should welcome them there?

There’s not a thing unusual in that. Suppose you invite someone to your home, but when he shows up his clothes are soaked with grease and oil. You say, “Let’s keep our conversation outdoors, okay?” He answers, “What’s wrong with you? I thought you invited me!” You know what happens next. It’s your home, and you can decide what’s welcome there. And if you can decide that for your house, how much more can the King of all the universe decide what’s welcome in His?

But What About ‘God is Love’?

We still have to know what to do with the truth that God is love, and that He calls us to love others as He loves. Does that mean He accepts everyone? Does it mean we should, too?

It might — if love were the only thing true about God. It isn’t. In fact it takes quite a twisted view of God to talk only of His love, and not His truth and holiness. God is just as committed to truth and righteousness as He is to love — except “committed” is the wrong word for it. He actually is truth and holiness, as much as He is love.

The church that makes “love” their one standard is following a false god. It is literally worshiping an idol.

God is love, but He doesn’t love everything. Because He is a God of truth, He hates falsehood. He seriously hates false teaching. His Word is emphatic on this. He wants it excluded from His Church. He demands it be excluded.

I find it helpful to separate the “who” from the “what.” Every person, every “who,” has an open invitation to God’s house. Some “whats” — some teachings — are absolutely excluded, however. Jesus pronounced woe after woe upon Israel’s false teachers (Matthew 23).

Paul says to “avoid” those who bring false doctrines (Romans 16:17-18). He even calls them accursed (Gal. 1:6-9)! He tells Timothy (1 Tim. 1:3-7) to put a stop to false teachings, and he offers no warm compliments about those false teachers. They’re “puffed up with conceit and understand nothing.” They have an “unhealthy craving for controversy and for quarrels.”

The church that makes “love” their one standard is following a false god. It is literally worshiping an idol.

Paul told Titus to watch out for “empty talkers and deceivers,” to “silence” them, to “rebuke them sharply” (Titus 1:10-16). If that sounds “unchristian” to you, you need to re-think where you get your definition of “Christian.” Was it from the Bible, or some secular source?

Peter is more vehement yet. “Their condemnation from long ago is not idle, and their destruction is not asleep.” He’s just getting started there: Read all of 2 Peter 2 for the full treatment. John tells us (2 John 7-11) that to welcome a deceiver into your home, or even to greet him, is to “take part in his wicked works.” To “greet” someone meant rather more then than it does now, but the point remains.

This is the word of the God who loves — because He hates falsehood. And because lies do us serious damage.

God Does Not Welcome Unrepentant Sin

God doesn’t think much of unrepentant sin, either (to say the least), but it’s different in this case. You get a sense of longing in the relevant passages, a desire to bring the person back into the fold. Not with any openness to continued sin, though.

We see it in Matthew 18:15-17 where Jesus says, “let them be to you as a Gentile or a tax collector.” He doesn’t mean we should hate them, but that we shouldn’t treat them as if they’re true members of the Body of Christ. There’s grace in that: It does them no good to think they’re in the right place when what they really need is to repent.

In 1 Corinthians 5:1-5, the unrepentant sinner is (according to the best interpretations of the passage) excluded from fellowship. The reason is “so that his spirit may be saved in the day of the Lord.” The point again is to show the person he’s on the wrong path. (It’s also to warn the rest of the church not to follow his lead.)

This is specifically about unrepentant sin. Sinners are welcome, or else none of us would be in God’s church, but consistent, persistent, and especially (though not only) open sin should earn the person an invite out the door. It’s for their good, and for the good of the church.

This is the word of the God who loves — because He also loves holiness. And because sin harms us.

I fellowship weekly with adulterers, gossips, fornicators, liars, hypocrites, and thieves, and I’m a sinner along with the rest of them. We don’t celebrate our sin, though. Rather, we mourn it, reject it, repent of it. We support each other when we fall, but not by saying sin is okay. We keep a guard on our teaching, too.

This should bring clarity to the way we greet the same-sex couple or the trans person at our churches. We can freely welcome anyone who comes to  discover, to learn, to seek to know Jesus. We should urge him to come to Christ in repentance, so that he can be restored just as we are being restored.

But we allow absolutely no place for anyone to teach “gay is okay.” That’s false, and it deserves all the vehement rejection you read about in 2 Peter 2. That includes teaching by example. When a same sex couple holds hands, it’s sending a message that this lifestyle good and right, and we have no  place for that, either.

Maybe this seems harsh. Don’t read too much into that — or too little. There is a standard here to be met. It is in the nature of standards to be rigid and impersonal; anything else would be biased and arbitrary. This topic is only half finished for now, as I still need to speak to the manner in which we treat the person in light of these standards: with love, with care, often with grief. I’ll return to that in a later column.

This article begins a series you can download as a reproducible 3-part PDF, When the Same-Sex Couple Comes to Your Church, including this article plus further guidelines and training on what to say and do in the moment.

Pastors’ Corner: What to Say and Do When the Same-Sex Couple Shows Up at Church

Pastors’ Corner: Don’t Be Caught Off Guard When the Same-Sex Couple Shows Up at Your Church

Pastors’ Corner on Sex, Sexuality, and Transgender: Got Questions?