Of Weathermen and Queen Elizabeth II 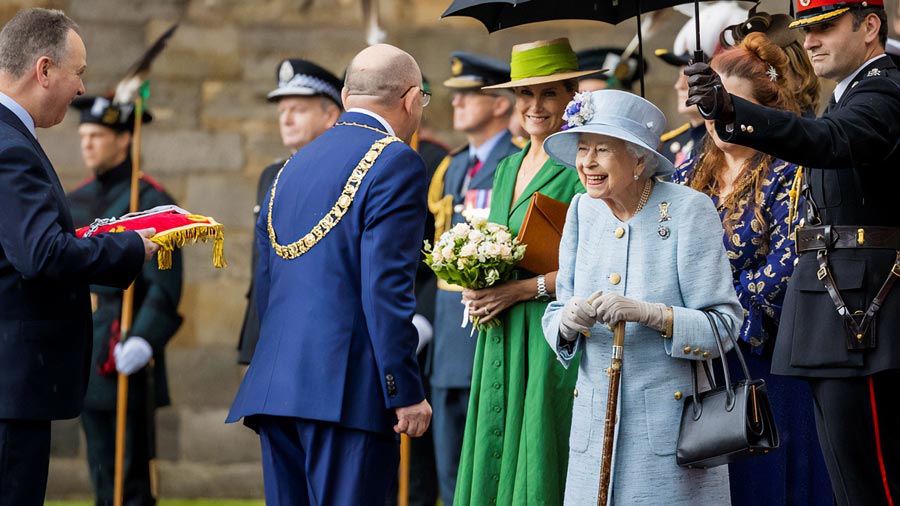 I liked going to Safeway when I was a little boy because the store had automatic doors. They were like magic. They opened even though you didn’t touch them. Once I stepped through those magical doors and looked up to see the weatherman from KTEN-TV (channel 10 in Ada, Oklahoma) right there in front of me. Had it been the Lord himself, the shock could not have been greater.

I consider myself lucky that I didn’t wet my pants.  As it was, I just ran off crying at the top of my lungs. There wasn’t a puddle for anyone to mop up, but just a story my big brother could hold over my head for years.

Now things are different. Until he moved, I walked past the house of the KOAM morning weather guy every day. When he was out in his front yard we would talk. If he was on his phone, he’d nod his head and wave. Occasionally, I would thank him for the good weather we’d been having.

Queen Elizabeth was wise, as she allowed tradition to protect her. She did the work that as queen she had been given to do.

Now I know that these folks we see on TV every day are just people, just human beings, like us. No, not like us, they are us.

But there is something there, some special quality that the folks that “everyone knows” have. I want to say they have a power, but that’s not precise enough. Charisma or charism maybe? Force of personality? Presence?

The Queen has Passed

As I write this, Queen Elizabeth II has just passed away, at the age of 96. She was the Queen of England not out of merit, but because she was born to a certain couple. That’s the way such things are done. That position gave her the quality I am talking about. Just because she was who she was, being in her presence would affect you.

I wouldn’t run crying from her presence. I would stand there like a grown up and wet my pants. Of this, I have no doubt. There would be a custodian there with a mop as the EMTs rolled my unconscious body off to the ER.

Others would be affected differently, I’m sure.

While Queen Elizabeth wasn’t queen because she deserved to be, she filled that position as well as anyone could in this modern day. I most respected her quiet, but unapologetic, Christian faith. She expressed this faith not as a theologian nor a preacher, but as a simple professing member of the faith. This is something of a trick when you are the titular head of the Church of England.

Pastors have this quality to a lesser degree within their churches. Bosses have it. Politicians have it, God help us. A word from them one way or the other can affect the way we feel. Their recognition can make our spirits soar. Their retribution can crush us.

Not everyone who has this quality acquits themselves well. The Kardasians who are famous for being famous use it as a cash cow. Some people would swoon in their presence. They are like insects the wind has lofted to a great height. Everyone can see them and there is money to be made, as long as people keep looking.

The Queen was Wise

Queen Elizabeth was wise, as she allowed tradition to protect her. She did the work that as queen she had been given to do. She didn’t do what she wanted or go off on her own or try to reinvent the monarchy. That couldn’t have been easy, over 70 years.

The queen guarded her gift so that it could be a boon to her people. When she bestowed an honor upon someone, it meant something to the person who received it. It lifted them up. It buoyed their spirit. When she spoke, the English people — and many others — listened.

Those who share this quality, this charism or presence, would do well to follow her example. Pastors, politicians, bosses, doctors, writers, celebrities, professors, anyone who can change a conversation simply by being who they are — guard your gift as the queen did.

And you weathermen out there, you with all your power and charism, be careful. And when you send a child screaming from your presence, be kind.

Bobby Neal Winters is associate dean of the college of arts and sciences and a university professor at Pittsburg State University. A native of Harden City, Oklahoma, he blogs at Red Neck Math and Okie in Exile. His last article for The Stream was “Don’t Just Lay There and Die.”