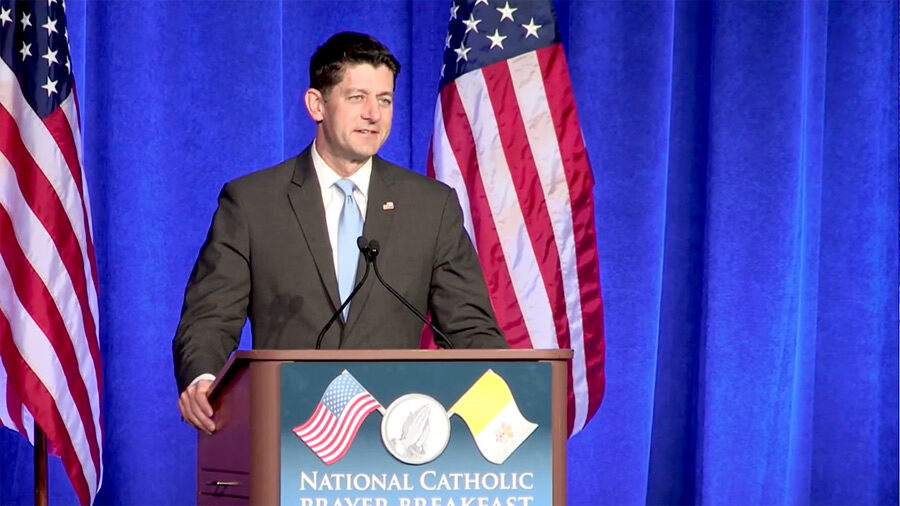 Former Speaker of the House Paul Ryan was in the news recently. He gave a speech that was very critical of former President Trump.

I would offer a counterpoint, but I already have. It happened in October of 2018, when I spent 10 minutes hollering at Speaker Ryan in a Maryland parking lot. It was right after I had become famous in the war over the nomination of Justice Brett Kavanaugh to the Supreme Court.

My point in engaging Speaker Ryan was to try and convince him that we are living in a time of danger in America. A danger every bit as serious as when communist spies infiltrated the government after the Second World War. I wanted to get across that there is absolutely no space between the modern Western left and the deadly Maoists of the Chinese Cultural Revolution. Both are only interested in your humiliation and submission. They care nothing for freedom and laugh at the idea of compromise.

We Don’t Live in Reagan’s America

I wanted to convey to Paul Ryan that things now are not as they were under President Reagan, when the majority of Americans agreed on basic first principles. America is under attack from socialists, feminists and Critical Race Theorists. People who would not think twice about eliminating our rights. The Democrats have become a criminal enterprise very similar to the German Stasi, the postwar German secret police who looked for heterodoxy from the official party line in every detail of human life.

We are in a war, Speaker Ryan.

Unfortunately because I was still so angry about the Kavanaugh hit, I fear a lot of my words to Ryan all came out in a jumble. I also want to note that Speaker Ryan was kind and empathetic and a good listener. My point here is to try and convince him of the uniqueness of the time we are living through, not to trash him.

Donny Trump Has the Cooties!

Before getting to the specifics of that strange tale, here’s what Ryan said that has inflamed some conservatives, including former President Trump. “Here’s one reality we have to face,” Mr. Ryan said during a speech at the Ronald Reagan Presidential Library in Simi Valley, Calif. “If the conservative cause depends on the populist appeal of one personality, or on second-rate imitations, then we’re not going anywhere.” Ryan said he had found it “horrifying to see a presidency come to such a dishonorable and disgraceful end.” He argued that Republican voters would “not be impressed by the sight of yes-men and flatterers flocking to Mar-a-Lago.”

Ryan also said this: “Culture matters, yes, but our party must be defined by more than a tussle over the latest grievance or perceived slight.”

In response, President Trump called Ryan “a curse to the Republican Party,” adding that “he has no clue as to what needs to be done for our Country, was a weak and ineffective leader, and spends all of his time fighting Republicans as opposed to Democrats who are destroying our Country.”

As I have been recounting in The Stream and exploring in a new book, in fall 2018 the political left and the media tried to annihilate Supreme Court nominee Brett Kavanaugh, a high school friend of mine. Using opposition research, extortion threats and even a honey trap, the left napalmed us with everything they had. A woman named Christine Blasey Ford accused Brett of sexually assaulting her in 1982 when we were all in high school.

The entire summer of 2018, Ford was working with an opposition researcher named Keith Koegler, as well as a reporter from the Washington Post named Emma Brown. There also followed accusations that Brett and I were running some kind of gang rape drug cartel in suburban Maryland. I was subjected to extortion and followed. My high school yearbook was analyzed the way the Stasi once analyzed a kid’s red ball that had been accidentally kicked into East German territory.

Journalist Philip Oltermann once described the absurdity of that incident.

The children, two girls and a boy from West Berlin, eventually managed to get their ball back, but not before the Stasi had thoroughly documented the ball’s position — ‘around 25 metres from the border markings’ — and photographed the ceremonial return of the offending object.

Back in 2016, the Hillary Clinton campaign paid for a fake dossier that was then used for four years by the FBI and the media to try to undermine a duly elected president. This is as bad as anything done by the treasonous perjurer Alger Hiss.

This is not politics. This is war.

So, in October of 2018, when I found myself purely by accident sitting next to former Speaker Paul Ryan in a Maryland breakfast joint, I took the opportunity to try and get this across. The speaker did say that he recognized me from the news reports. His own response to the Kavanaugh battle had been, in my view, lukewarm.

That’s great, Mr. Speaker. But what about you? Are you animated?

This Cannot Happen in America!

Speaker Ryan and I exchanged polite small talk while we finished eating and then I asked him to talk outside in the parking lot. He obliged, but when we got out there a lot of the anger I had built up over the mauling by the American Stasi just came spilling out. I just remember talking about evil and due process. I kept saying over and over again, “This cannot happen in America.” The speaker listened and we shook hands. He was polite and we parted in a friendly manner.

There is a time for talk and politeness and theorizing, and a time for action. At some point, you have to go to the joyless, angry authoritarians and (like those kids in Germany) demand your ball back. During the entire nightmare of 2018, I knew two things for sure.

I’m not sure a President Ryan would have done the same.