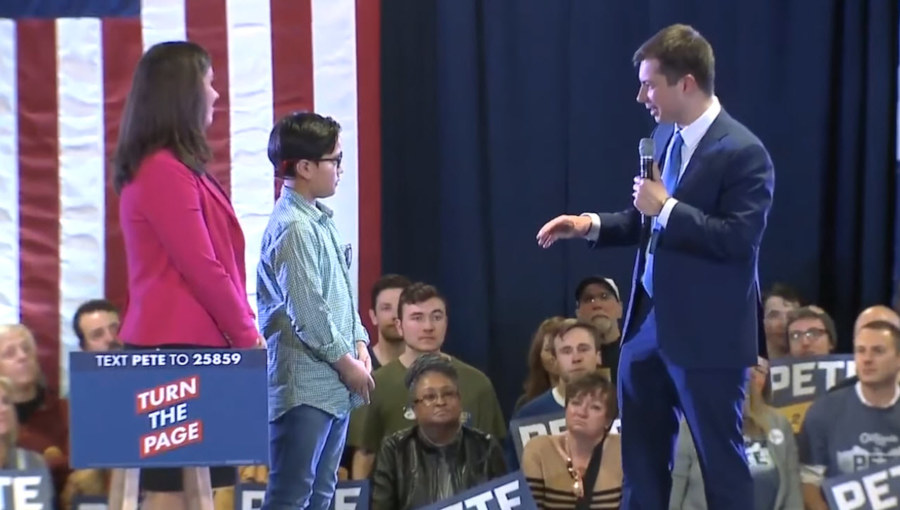 What does a 9-year-old child know about sexuality? What does a pre-pubescent boy know about the meaning of “gay”? How many boys of that age still dream innocently of marrying their mothers? It is therefore absolutely outrageous that presidential candidate Pete Buttigieg gave a national platform to a 9-year-old old who wanted advice on coming out as gay.

This is as shameful as it is irresponsible. That there was not an immediate, national outcry points to the morally confused and spiritually comatose condition of much of our country.

As reported by the New York Post, “A 9-year-old Colorado boy got kudos from openly gay Democratic presidential hopeful Pete Buttigieg when he asked him during a rally for help telling the world that he’s also gay.”

The boy’s name was Zachary Ro, and his question, which he wrote on a piece of paper, read, “Thank you for being so brave. Would you help me tell the world I’m gay too? I want to be brave like you.”

Not surprisingly, his question “was met with cheers and chants of ‘Love means love’ from the nearly 4,000 people in attendance.”

Buttigieg was so impressed with the question that he brought the boy on the platform, together with his mother. And he commended the boy’s courage, saying, “I don’t think you need a lot of advice from me on bravery, you seem pretty strong.”

This is Child Abuse

The crowd, of course, loved his answer, and the video of their interaction has gone viral. Instead, it should have provoked a national outrage. This, too, is child abuse.

Remember. This child is only 9 years old.

He is only a few years removed from thinking that boys who like girls have “the cooties.” (Do you remember hearing that in kindergarten and the first grade?)

Surveys have indicated that plenty of teenagers who identify as gay no longer do so when they reach adulthood.

And surveys have indicated that plenty of teenagers who identify as gay no longer do so when they reach adulthood. (See below for more.)

I’m aware, of course, that many gay readers will say to me, “You are completely ignorant. I knew I was different when I was 6.”

Perhaps you did. But plenty of others thought they were same-sex attracted as children only to find out later that they were not. (And how many kids identify as heterosexual and then later “discover” they are homosexual?)

Sexual Attraction Is Not Fixed, Says Health Study. How Much Less So for Children?

As a 2019 article in Science Alert notes (reporting on a major new, scientific health study), “Far from being being a fixed preference, the findings suggest that sexual identity and attraction undergo extensive and often subtle changes throughout a person’s life, continuing long past adolescence and into adulthood, with women showing slightly more fluidity than men.”

The lead author of the study was Christine Kaestle, a developmental health scientist at Virginia Tech.

Carly Cassella explains that, “Using data from a national survey of American students, [Kaestle’s] research tracks the sexual identity, sexual behaviour and romantic experiences of over 6,000 students from the age of 16 to 32.”

Yet we are talking about tracking the sexual fluidity of teens as young as 16. What about younger teens? What about pre-teens? What about children who are just 9? Without a doubt, the shifts in identification would be even more dramatic.

How Dare We Publicly Brand a 9-year Old as Gay

A pro-gay, middle school teacher told me some years ago that coming out as gay was the new fad in her school, the new “cool” thing to do.

She then told me that, a few days earlier, a 12-year-old boy came out as gay to her class, only to say to this teacher the next day, “I think I made a mistake. Can I take it back?”

How dare any of us put a 9-year-old child like this on public display, now branding him for life as gay. What if Zachary wants to “take it back” in a few years? What then?

Can a Child Give Consent to a Sexual Relationship?

Let me put this in a larger context for a moment. Perhaps the light will go on for you as I do.

If there is one accusation that gay men hate more than any other it is the accusation that they are pedophiles. That all (or most) homosexual men are interested in having sexual relationships with boys. That it is not safe to leave a boy alone in the presence of a gay male. That all (or most of them) are child abusers. Every gay man with whom I have talked over the years has categorically and emphatically rejected these accusations. And I, for one, believe them.

In my view, the real danger is one of older homosexuals influencing impressionable children. Of indoctrination more than seduction. Of persuasion, not rape. That’s one reason I raised concerns about the potential, negative impact of a President Pete Buttigieg.

Of course, there is no denying the well-known tradition of “man-boy love” in homosexual history, from the “mentoring” of ancient Greece to the NAMBLA societies of today. Calling it “intergenerational intimacy” does not make it any less heinous.

Advocates of such practices, however, always emphasize that the sexual and romantic acts are consensual.

To paraphrase, “We absolutely deplore the raping of children. It is despicable and should be punished severely by the law. But children deserve freedom of choice as well, and if you know you are gay as a child, you should have the right to express yourself.”

In the words of gay pederast activist David Thorstad, speaking at a convention in 1998, “Freedom is indivisible. The liberation of children, women, boy-lovers, and homosexuals in general, can occur only as complementary facets of the same dream.” (For this citation and many more from Thorstad, see here.)

As expressed by the pioneer gay icon Harry Hay in 1983, “[I]f the parents and friends of gays are truly friends of gays, they would know from their gay kids that the relationship with an older man is precisely what thirteen-, fourteen-, and fifteen-year-old kids need more than anything else in the world.”

Can a Child Understand His Own Sexuality?

And it is here that our outrage is palpable. “How,” we ask, “can a 13-year-old child give consent to a sexual or romantic relationship with an adult, be it homosexual or heterosexual? This is a form of child abuse.”

Indeed, it is. Our outrage is not only palpable. It is justifiable.

Can such a young, developing child even know for sure that he or she is “gay”?

Does a 10-year-old understand sexuality? Can a 9-year-old truly understand the difference between male-female relationships, let alone the concept of “sexual orientation”?

We Dare Not Be Silent

That’s why the recent, public interaction between Zachary and Mayor Pete is so disturbing.

Let us, then, shout it from the rooftops, regardless of the mockery we will take from today’s “enlightened” society.

We dare not be silent for the sake of the children.