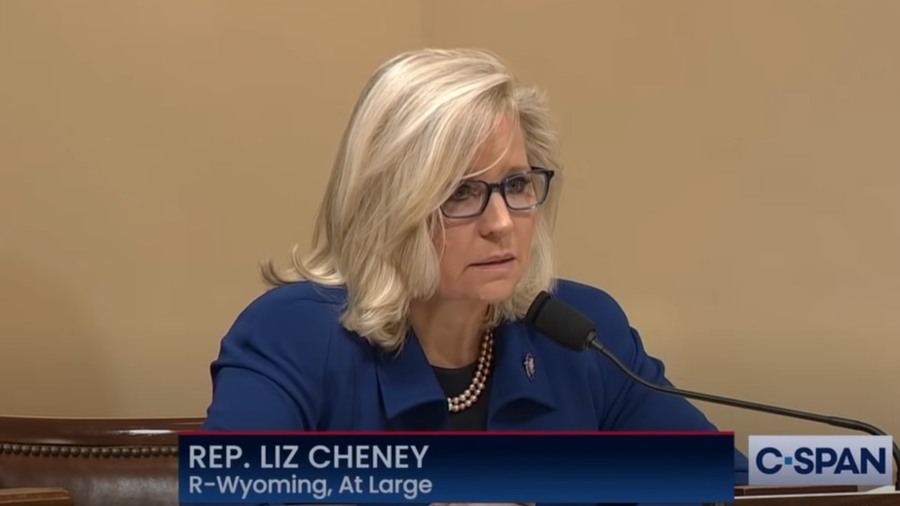 In a late edition yesterday, we discussed the lies that had come thick and fast during the illegitimate January 6 committee hearings. As it happens, there was one huge lie told over the weekend that wasn’t on our radar until later. It should surprise no one that this deceit came from Liz Cheney.

This is a Lie

She was on Fox News Sunday, which seemed to me like a good reason not to watch Fox News Sunday. However, since the internet is forever, her lies were preserved for all time. Cheney told a ginormous whopper about the Oval Office meeting in which President Trump authorized the deployment of 20,000 National Guard troops for his rally a couple of days later. She actually said on the air that then-acting Defense Secretary Chris Miller, one of five present at that meeting, had denied Trump authorized this.

“Chris Miller has testified publicly that Donald Trump never issued any order to deploy the Guard, to protect the Capitol,” Cheney lied in answer to Bret Baier’s question. “And so I would point people to [Trump’s] own secretary of defense’s public testimony.”

Baier didn’t challenge her on this during the show, and, as one might imagine, it has received almost no media attention since. But, as we recently reported, every person at that meeting has confirmed that Trump authorized 20,000 Guard members for his rally. Miller is on video confirming it. So is Kash Patel. Both were interviewed by Sean Hannity, and Miller was present when Patel said that “Mr. Trump unequivocally authorized up to 20,000 National Guardsmen and women for us to utilize should the second part of the law, the requests, come in. But as you highlighted, those requests did not come in.”

Miller could not have been clearer that Trump absolutely made the authorization: “The President was doing exactly what I expect … any commander-in-chief to do. He was looking at the broad threat against the United States and he brought this up on his own. We did not bring it up.”

According to testimony from Gen. Mark Milley, Pence did call him multiple times from inside the building on the day of the riot, calling for assistance. But Cheney has twisted facts to suggest that Trump did nothing — that all requests for security measures came from Mike Pence.

“Trump gave no order to deploy the National Guard that day…” Cheney said to Baier. Never mind that “order” is not the correct word. The President, any President, cannot order the Guard. He can authorize the deployment of the Guard, which he did — two days earlier. So, why weren’t they there? House Speaker Nancy Pelosi and Washington DC Mayor Muriel Bowser failed to act on that authorization. Bowser even rejected the use of the Guard in writing.

Just to give you an idea of how Liz Cheney’s lies were reported, Rolling Stone ran this headline: “A Sunday Miracle: Fox News Audience Exposed to Jan. 6 Truth During Liz Cheney Interview.” Ironically, their story quoted more of her lies.

“This was a mob that Donald Trump sent to the Capitol,” Cheney said, “and I think that’s important for us to keep our eye on.”

Cheney said that all the witnesses so far have been Republicans. (Aside to Liz Cheney: Liz, you claim to be a Republican. I think you’ve shown us how objective you, as a “Republican,” can be when it comes to President Trump. If you had any credibility left to lose — and I would say you didn’t — you lost it on Sunday.)

NY Post and WSJ Editorial Boards Have Been Had

“Look, it’s not just me that is saying that Donald Trump is unfit for office,” Cheney said. It’s other entities owned by Rupert Murdoch. “It’s the New York Post in their editorial on Friday. It’s The Wall Street Journal — said the same thing after our hearing Thursday night.”

And in truth, we don’t know what to say in polite company about the editorial boards of the NY Post and WSJ, whose members obviously don’t read and heed their own writers’ excellent reporting. The fact that the one-sided J6 committee has been able to lie convincingly enough to bend these editorial boards testifies to their ability to propagandize. Editorial boards, you have been had.

‘A Stunt to Placate Lazy Journalists’

Greg Gutfeld in his monologue on Monday night talked about this show trial and how the left, notably Stephen Colbert (whose team was able to “breach” the Capitol building for hours with no penalty), is gushing over it. As Colbert said Thursday night to MSNBC host Chris Hayes, “It’s gonna change how any congressional hearing is held to a standard, because the, you know, the circus that usually happens is no longer gonna be seen as entertainment.” I’ll pause while you roll around on the floor, laughing helplessly.

Hayes called this televised event “a tour de force of production.” Well, yes, it is a production; a big piece of propaganda, totally one-sided and put together at taxpayer expense. It’s definitely “appointment TV,” as in, you should make an appointment to do anything else but watch it.

I like what Gutfeld said, calling this “a stunt to placate lazy journalists who think summarizing stuff from a televised hearing is work. It isn’t. Know what’s work? Go outside and talk to Americans — how they feel about their money being spent on trials that will now extend into September. My choice [my prayer] is they’ll bite your head off.”

And if you’re ready for another laugh, here’s one. Liz Cheney hasn’t ruled out a presidential run in 2024. I am not kidding.

Not Funny At All

Now, here’s another look at something that’s not funny at all: Ashli Babbitt’s death, from a professional use-of-force expert who has testified in court more than 350 times as an expert witness.

Stan Kaphart, who appears in the new EPOCH TV documentary The Real Story of Jan. 6, says, “My conclusion, based on what I saw and observed in the video clips, is that Ashli Babbitt was murdered. She was shot and killed under cover of authority by an officer who violated not only the law but his oath and committed an arrestable offense.” There’s no way, he says, that this officer was in fear of losing his life or being grievously injured.

The attorney for shooter Michael Byrd disagrees, of course. The documentary is for subscribers to EPOCH TV; here’s the link in case you do subscribe.

It was in this documentary that we learned about another woman who was beaten senseless by Capitol police, when she had done nothing. This one did live to tell about it, and the beating (very hard to watch) is on video.

In an update on the Secret Service controversy regarding the loss of text messages around the time of January 6, the agency says it never received a copy of the congressional letter asking it to preserve all records related to the Capitol protest and that the data could have been deleted accidentally. They’re working on recovering data deleted from at least 10 agents’ phones. Here’s what we know about the developing story.

Finally, if you’re thinking Liz Cheney must be the Liar Of The Century, I can tell you who’s giving her a run for her money. Unfortunately, it’s President Biden. You already know enough about what happened on J6 to be able to see through his lies, but so many people don’t (case in point, Rolling Stone readers). Biden probably lacks the cognitive ability to see through his own lies.