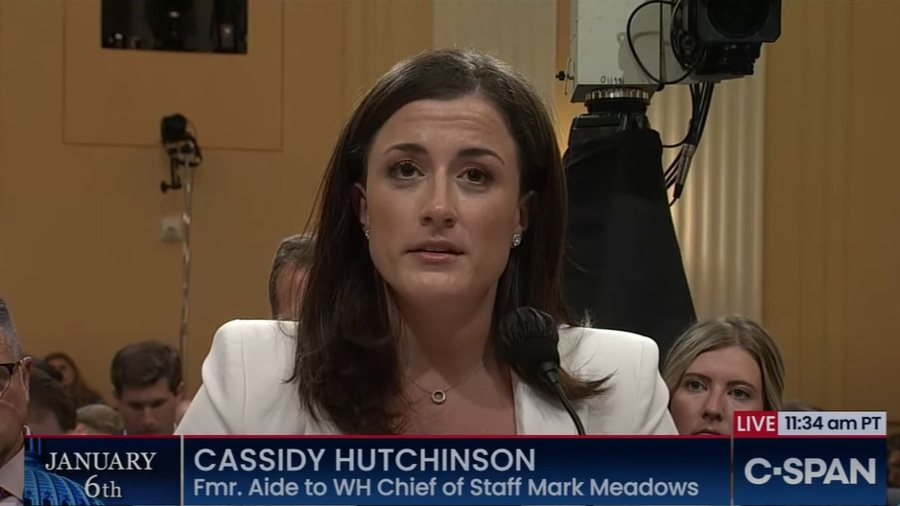 Former White House counsel Pat Cipollone, who according to witness Cassidy Hutchinson spoke with her on the morning of January 6 about not letting President Trump go to the Capitol, testified before the committee for eight-plus hours on Friday. The way his testimony is being reported is a primer in how to create fake news.

If you’re senior editor in charge of propaganda, you first come up with a misleading headline to get your desired idea across. In this case, the headline is that Cipollone “did not contradict” Hutchinson’s testimony. That’s the story according to multiple establishment media outlets. Recall that Hutchinson testified Cipollone had told her that then-President Donald Trump would be charged with “every crime imaginable” if he went to the Capitol on January 6. That had the predators on the committee salivating.

This committee is on a seek-and-destroy mission. They’re not trying to find out what happened; they intend to obliterate President Trump. It’s pure politics, at taxpayer expense.

The next step is to put the key information far down within the body of the piece. To Vanity Fair’s credit (rarely warranted), writer Kelly Rissman waited only until the fourth paragraph to say, “However, sources familiar with Cipollone’s testimony told CNN that not only was the former White House lawyer not asked about Hutchinson’s quote (emphasis ours), but if questioned about it, Cipollone would not have confirmed it.”

Perhaps if Rissman had written the headline — editors usually determine those — she’d have highlighted that. I don’t want to blame the writer if her editor had other ideas.

ABC News ran the headline “Trump White House counsel’s Jan. 6 interview didn’t contradict other witnesses: Kinzinger.” (Yes, the headline quotes foaming-at-the-mouth Trump-hater Adam Kinzinger, as interviewed by George Stefanopoulos. Talk about a set-up story.) Farther down, they dispense with the major inconvenient fact in this vague line: “Both CNN and The New York Times reported that Cipollone was not asked about some specifics from Hutchinson during his own interview on Friday.” “Some specifics”?? Like, maybe, the most important question to ask him? Why was that?

By the way, something Kinzinger said in his ABC interview gives away the goal of this “fact-finding” (haha) committee:

…I can guarantee…in about 10 years, there’s not going to have been a single Trump supporter that exists anywhere in the country. It’s like [Richard] Nixon. There were a lot of people that supported Nixon until he was out of office, and then everybody was like, ‘No, nobody supported Nixon.’

This committee is on a seek-and-destroy mission. They’re not trying to find out what happened; they intend to obliterate President Trump. It’s pure politics, at taxpayer expense.

Cipollone’s Testimony Under Lock and Key

Cipollone’s testimony is on video, but he’s not expected to testify publicly, according to The New York Times. They obviously don’t want him on live TV. A source told POLITICO that his testimony is “still under lock and key.” That source said the committee did find his testimony “very helpful,” but you better believe that if they’d gotten what they wanted from him, the transcript would be everywhere. What they’ll do is go through the video and cherry-pick fragments of testimony that are “very helpful.” Anything else will remain under lock and key.

Byron York pointed out the problem with the committee’s questioning of Cipollone in a couple of tweets. “Hutchinson is J6 committee’s biggest star. Now members can point to her testimony and say: No other witnesses have contradicted her! How dare you question her account! 4/4 End.”

In his other tweet, he noted that according to The New York Times story, which cites “two people familiar with Cipollone’s actions that day,” the J6 committee was informed in advance that Cipollone “would not confirm” that conversation if he were asked about it. So he wasn’t asked.

That is the big take-away. Joel Pollak’s report in Breitbart News got it right. The headline: “Report: January 6 committee avoids asking Cipollone questions that could implicate Hutchinson in perjury.”

In related news, if you missed the story about Steve Bannon agreeing to testify before the committee, here’s the magnificent letter Trump wrote to tell him he’d be waiving executive privilege and allowing Bannon to go ahead.

Peter Navarro still refuses to dignify the committee with his testimony, though he could face two years in prison. His legal bills have topped $400,000, though he wasn’t even at the Capitol on January 6. He says his resistance isn’t about himself or even President Trump, but about constitutional issues such as the separation of powers.

(Side note: Tucker Carlson, on his Monday show, pointed out that both Bannon and Navarro happen to have been two of the most vocal and effective China critics in the Trump administration. Something to ponder as we learn even more about the “Biden family business” from Hunter’s electronic debris.)

What About the Proud Boys?

If the January 6 committee were really interested in fact-finding, they’d be looking into the FBI’s activities leading up to the rally and what they knew. A whistleblower has provided Gateway Pundit with a leaked report that shows the FBI is prosecuting Proud Boys and Oath Keepers even though their own FBI confidential human source (CHS) absolved the groups he witnessed. From Gateway Pundit:

The informant told his handlers at the FBI that the Kansas City Proud Boys Group he was infiltrating and accompanied to the Capitol on January 6 ‘were not involved in, nor did they inspire the breaking of the barriers at the Capitol building.’ CHS describes the scene as the crowd doing it, as a ‘herd mentality,’ and that it was not organized.

In fact, the CHS said, the Proud Boys had come to the event “to risk their own safety to protect average Trump supporters from Antifa attacks so MAGA folk could enjoy the day and ‘get back to their hotels safely.’” He also said that group members never mentioned “stopping the electoral college or certification of the election.” According to Gateway Pundit, “the FBI plant made it clear to his bosses that the Proud Boys and their friends had no idea what they were walking into, there was no conspiracy to enter the Capitol, and Proud Boys helped law enforcement inside the Capitol.”

A total of six from this group have been charged with conspiracy, obstruction of an official proceeding, aiding and abetting (this charge carries a maximum sentence of 20 years), obstruction of law enforcement during civil disorder, threatening a federal officer, entering and remaining in a restricted building or grounds, and carrying a deadly or dangerous weapon.

If you have time, here’s the internal FBI document; for the really interesting part, scroll down and start at page 15. We have to wonder if the grand jury — and the attorneys for the Proud Boys — got to see this.

The Facts You Won’t Hear

As Jonathan Turley says in the following commentary, head of the Oath Keepers Stewart Rhodes has offered to testify, even though he faces criminal charges. But…it has to be live and in public, so it “can’t be edited or tailored by the Committee.” I would buy a front-row ticket and a giant bucket of popcorn to see that. As Turley says, “If Rhodes is willing to take this risk, the Committee should be willing to give up control over what the public can see and hear in the J6 investigation.” If they’re not, that tells us all we need to know (as if we didn’t know already).

And there was this, about three Antifa members driving to the Capitol grounds that day with a gun in their vehicle, lying to law enforcement about it, and being allowed to simply drive home to Michigan. Here’s more.