Meaning 'he knows better now', which means 'Now he agrees with us' 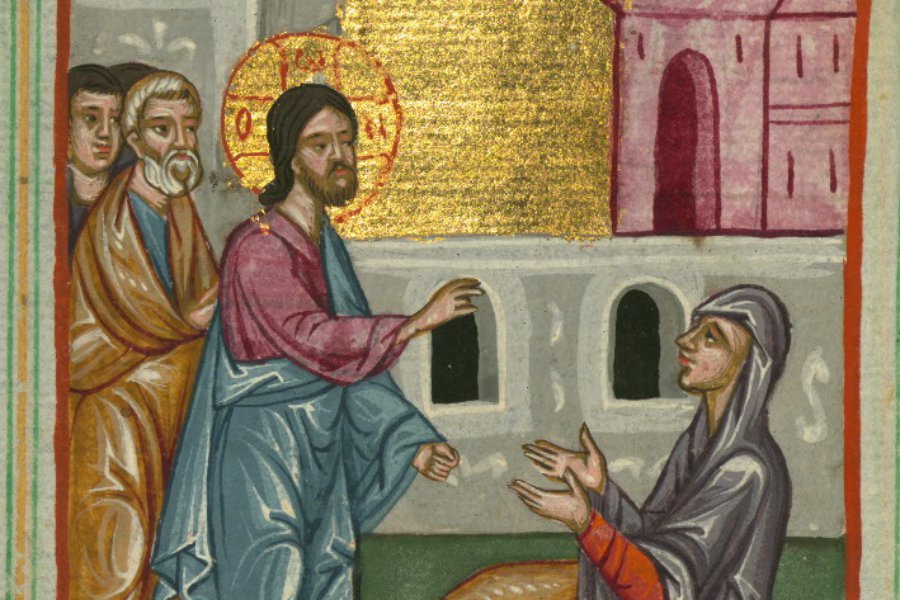 Jesus and the Canaanite woman, from an illustrated Arabic manuscript, most likely created in Egypt by a Coptic monk in the 17th century

He thinks he’s scoring a point. “If Jesus could change his mind when confronted with truth, maybe his followers should be willing to as well.” That is a minister named Brandan Robertson responding to a Stream story. He’d claimed that Jesus had said racist things, but then repented.

The self-described “progressive Christian” Robertson commends a clip from a Rev. Jacqui Lewis. Lewis thinks she shows Jesus changing his mind on a very big matter. After an exchange with a Canaanite woman, he suddenly realized that he’d misunderstood his mission. That’s a big Oops for the Son of God. But he was big enough to admit he was wrong.

If Jesus can do that, why can’t those silly people at The Stream?

To be fair, Lewis offers a plausible reading of the story. It’s one of the odder stories in the gospels, at least to our ears.

She speaks of Jesus’s encounter with the Canaanite woman. The story appears in Matthew (15:21-28) and Mark (7:24-30). She asks Jesus to heal her daughter, he ignores her, and the disciples ask him to send her away. He tells them he was only called to the children of Israel. The woman argues anyway. They banter back and forth, and when Jesus seems to give her a definite no, she deftly turns his words to make her own point.

Jesus says it would be wrong to give the children’s bread to the dogs. She notes that even the dogs get the crumbs from the master’s table. Samaritan woman FTW! Jesus praises her faith and heals her daughter.

Lewis tells the story. She implies that Jesus’s words about “the dogs” were beneath him and contradicted what he’d said before and after. She then asks, “And what does Jesus do?” Throwing out her hand with each word, she says deliberately, “Changes. His. Mind.”

As I say, it’s a plausible reading — unlikely, but plausible. Why did the writers and later editors leave that story in? They believed Jesus was not just perfect, but Son of God-perfect. The last thing they’re going to include in a gospel is evidence of his imperfection. So they, the earliest and closest readers, didn’t think it says what the modern progressive readers think.

And look at the story itself. Look at it more closely than Robertson and Lewis do. As the gospels tell it, it’s not a story about Jesus, much less about him coming to a life-changing insight that he’d been wrong. It’s about a woman showing great faith, which Jesus recognizes and rewards. See how it ends:

She said, “Yes, Lord, yet even the dogs eat the crumbs that fall from their masters’ table.” Then Jesus answered her, “O woman, great is your faith! Be it done for you as you desire.” And her daughter was healed instantly.

Jesus has no “aha” moment. That’s not the way the story goes. The story doesn’t say, “And then Jesus saw,” but “Then Jesus answered her.” And that tells you what everything up to that point is meant to say. The story is built to lead to his affirmation of her faith. The people telling the story didn’t think Jesus had learned anything new. That’s not the story they’re telling.

Pope Benedict explained: Jesus’ “apparent aloofness” did not discourage the woman, who kept pressing him for help. “She did not even desist when she received an answer that would seem to have extinguished any hope: ‘It is not fair to take the children’s bread and throw it to the dogs.’ She had no wish to take anything from anyone; in her simplicity and humility a little was enough for her, crumbs sufficed, no more than a look, a kind word from the Son of God. And Jesus was struck with admiration for an answer of such great faith and said to her: ‘Be it done for you as you desire’.”

There are other more plausible readings than Robertson and Lewis’s. The story can be read many ways, none of them requiring the idea that Jesus suddenly saw that he had been wrong.

For example, it may have been written to emphasize God’s overflowing grace. That’s the reading of feminist theologian Maria Gwyn McDowell. The Canaanite woman had no reason to care about Jesus at all. Yet she sees something in his teaching his disciples didn’t see: “She sees a God who is abundant, extravagant, who has created enough for all. … She takes the language of the culture that refuses to welcome her, and turns the story around: it isn’t about who gets it first, it is about a God who is abundant now, generous now, overflowing with mercy, now. There is enough of God to go around.” And Jesus says, “Bingo!”

It could have been what we call “a teaching moment” for the disciples. Jesus often spoke in a way to upset people’s expectations and make them see what they hadn’t seen. His parables do that.

He knew what they thought about Canaanites and about women, and about people who kept bothering the boss. He played along till she showed them who she was, which was a clever woman with great love for her daughter and great faith in Jesus. They were the ones who thought he was only called to the Jews. Jesus dramatically showed them the truth, by praising a foreign woman’s insight.

Jesus may have been playing on the typical Jewish attitude toward outsiders, especially pagans like the Canaanites, in order to turn it upside down. He may have been teaching his disciples a lesson, because they had wanted to send the woman away. He hit them with the fact that the person they think the outsider may know him better than they do.

Jesus may have been bantering with the woman, as a Jewish friend once told me, saying that he recognized what Jesus was doing right away, because it was so Jewish. Jesus and the woman play an intellectual game, whose rules they both knew, and which she wins. Had she lost, he would have helped her as he helped so many other people.

The exchange could have been a way Jesus moved to the next stage, as we might say. As Jason Sobel explains in an article we published, “At this point in his ministry, Jesus was focused on ministering to Israel, knowing that a time was coming when that would change. The purpose of this passage is to ultimately anticipate and point to that time. In other words, Jesus was staying on task.”

Those are a few possible readings, more plausible I think than Lewis’s, gathered from a quick web search, a few books on my shelf, and some thoughts of my own. I didn’t have to go very far to find better readings than her’s. And Sobel’s article, which I much commend, offers more explanations. That the woman was a member of the elite, for example, and Jesus is teaching a lesson about the rich needing God’s grace.

Though it sounds so odd to our ears, it turns out to be a very rich story. If, that is, you don’t reduce it to a simple example of a lesson you’d like it to teach. If you read it as revelation — or even as literature — and not as a political prooftext.

Reading Out of Context

One more thing: Lewis doesn’t read the passage in the context of the story the gospels tell. She treats his words in this story as an obvious contradiction to other things he said, because she treats them in isolation from everything else we know about him.

Does anything in the rest of the gospels suggest that Jesus was a man who’d call someone else a dog, which was a pretty serious insult? Does anything suggest he’d be genuinely unconcerned with someone in pain who wanted his help? The character of the man as revealed by the gospel writers points the reader to another reading.

Among other things, Jesus’s own ancestors included two Canaanite women. If he meant what Lewis thinks he meant, Sobel notes, he would have been repudiating his own ancestry.

Progressive Christians love this story. They quote it a lot. Not because it’s a central story in the gospels. It’s not. It’s a moving story of a mother saving her daughter’s life. It’s even a funny story, if you like the banter. It shows us a side of Jesus we don’t see so much in the rest of the gospels.

And it’s a lesson to each of us in the need to persist in faith and not give up when God seems to be silent. It’s a lesson to listen to others we want to ignore, who might know Jesus better than we do.

But I don’t think that’s why our progressives like it. They’re not reading the story so much as using it. They use the story because it lets them claim that Jesus. Changed. His. Mind.

What Else Did He Get Wrong?

Who knows what else he was wrong about? Like Hell. He talked a lot about Hell in a way we don’t like. Or marriage and divorce. Or turning the other cheek. Or caring for the poor. Whoever you are, Jesus tells you to live a way you don’t want to live.

That makes the story of Jesus and the Canaanite woman an amazingly useful story to progressive Christians. Because Jesus was wrong once and admitted it, he would admit he was wrong about other things too. But he’s not here, so we can speak for him.

The Robertson/Lewis way of reading that one story lets modern Christians assert the authority of Christianity and even of Jesus himself, for whatever they believe.