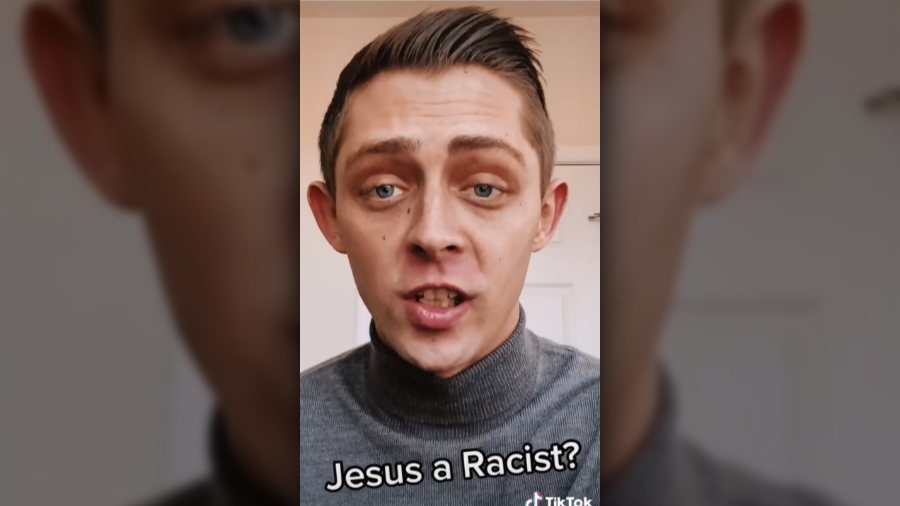 Rev. Brandan Robertson claims on TikTok that a passage in Mark indicates Jesus was racist, and that he repented of it after his encounter with a Syrophoenician woman.

Reverend Brandan Robertson took to TikTok last week with the bold claim that Jesus was a racist. In his video, the pastor asks if his audience was aware that, “There’s a part in the Gospel of Mark where Jesus uses a racial slur?”

Robertson then goes on to claim that Jesus repented of his racism when confronted by a woman, concluding with an assertion that he loves the story because it’s “a reminder that Jesus is human, he had prejudices and biases, and when confronted with it he was willing to do his work.”

But before people rush to cancel Jesus, it’s important to understand the assertion this pastor is making in its proper historical context, and thus uncover the truth: Was Jesus a racist?

Reverend Robertson specifically referred to Mark 7:27 which states, “And he said to her, ‘Let the children be fed first, for it is not right to take the children’s bread and throw it to the dogs.’” The Gospel of Mark indicates this woman was Syrophoenician, so we know that she was a Gentile. The Gospel of Matthew tells the same story and says the woman in question was Canaanite.

In the genealogy at the outset of Matthew, there are four gentile women who are listed as ancestors of Jesus. And two of those women, Tamar and Rahab, were Canaanites. Were Jesus making a racist remark, he would be repudiating his own lineage, identity, and background. Further, from the perspective of the writer of Matthew, and of Jesus himself, they held emphatically that the only way to bring the promised Messiah was for Jew and Gentile to come together, which would usher in the Messianic Kingdom.

Every time Jesus interacted with women and Gentiles, he elevated both.

To include in a Jewish genealogy two Canaanite women was radical in the first century. At a time where race often determined access to specific places to live, ability to earn an income, and status in society, this was unheard of.

Further, taking one passage from Scripture without looking at the larger context leaves the reader without a proper understanding. How did Jesus, for example, treat women and Gentiles during the entirety of his ministry?

Every time Jesus interacted with women and Gentiles, he elevated both.

In the Book of John, chapter four, the writer records an interaction with Jesus and a Samaritan woman, a Gentile. In this conversation, Jesus crosses gender barriers, cultural barriers, socioeconomic barriers, ethnic barriers, to reach out to this woman to make an offering of “living water” and salvation to her, to the shock and astonishment of his own disciples. And in the Book of Luke, Jesus praises a Roman Centurion — remember this man represented evil occupation and oppression to the Jews in Israel — praising and elevating him with, “I tell you, not even in Israel have I found such faith.”

Now let’s take a look at the specific interaction raised by Rev. Robertson.

What was happening and what message was Jesus sending?

First, it’s important to consider Jesus’ timing and mission. At this point in his ministry, Jesus was focused on ministering to Israel, knowing that a time was coming when that would change. The purpose of this passage is to ultimately anticipate and point to that time. In other words, Jesus was staying on task.

Think of John, chapter two, in which Jesus said, “Woman my time has not yet come.”

In the first century, it was commonplace for rabbis to test prospective disciples or someone who wanted to convert to Judaism to see their character and heart. Is this person serious? Is this person committed? Rabbis would even push people away and come across as unkind to test the resolve of those coming to them.

Next, for miracles to occur, Jesus was often seeking to certify that the people who came to him had faith. In those days, there were shamans, wandering magicians, and witch doctors travelling around. This woman was a pagan. So, Jesus wanted her to understand he was not roaming around and claiming power over spiritual forces. He wanted her to understand who he was and who the God of Israel was so that she would have no misconceptions.

Part of an Elite Class

Finally, this woman was part of the elite Greek citizen class.

As a whole, this class took advantage of and built their wealth, position, and power on the backs of poor peasant Jews. It was common for the class that this woman belonged to literally take bread from poor Jews in the areas in which they lived, a group that often exploited others. As she was part of this highly privileged class, Jesus’ words were meant to reverse this reality.

Jesus was putting this woman in the place of many Jews.

Things had now been reversed.

The woman was meant to give hope to the poor, and to assure his audience that rich people depend on God as much as the poor. Rich and poor, men and women, and Jews and Gentiles all need God and the Messiah of Israel to find life and healing.

A Model of Faith

Passing the test of Jesus, she becomes a great model of faith. She recognizes Jesus’ identity as the Jewish Messiah and Redeemer of Israel even before his very own Jewish disciples do. And she acknowledges and affirms Jesus’ unique identity and mission first to his own people, the Jewish people, then to the Nations. Rather than a racist, unpleasant interaction, the Gospels are profiling a woman of courage and inspiration, an example to us all.

The message of Jesus is clear.

There is no racism in the Kingdom of God, and there is equality in the Kingdom of God. Rather than being a racist, Jesus remains the world’s greatest example of what unity should look like, of a world beyond race, a world in which all Children of God are loved and embraced.

Rabbi Jason Sobel is author of Mysteries of the Messiah and founder of Fusion Global Ministries.